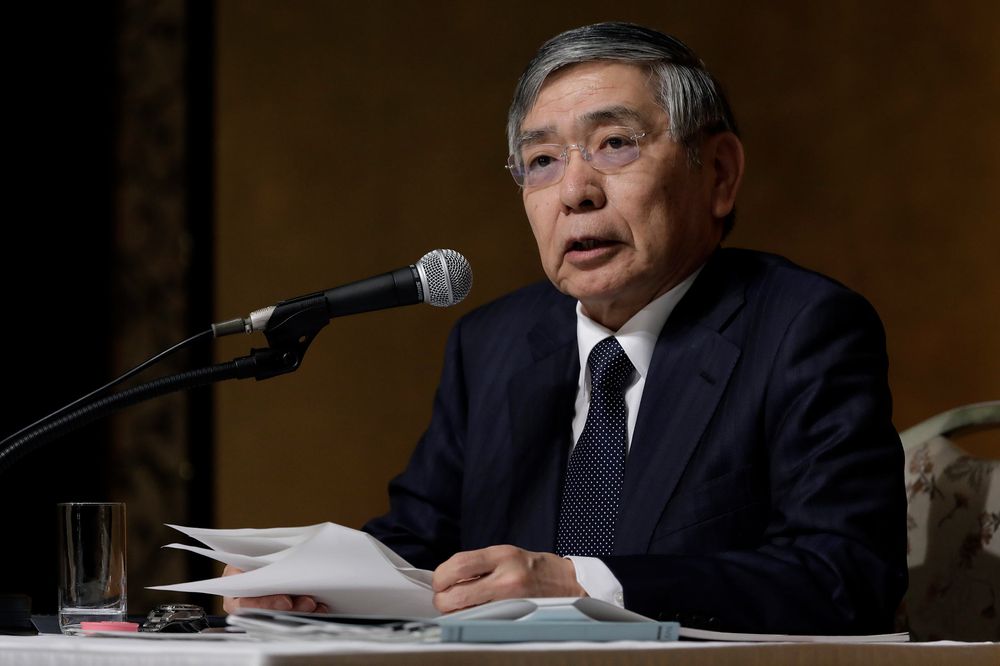 Bank of Japan Governor Haruhiko Kuroda said the country had escaped from deflation but still had more progress to make before reaching its goal for 2 percent inflation.

“While the policy approach has steered Japan’s economy in the right direction, our intellectual journey has not yet been completed,” Kuroda said in speech at the University of Oxford on Thursday. “The rate of change in the consumer price index recently has been around 0 percent and there is still a long way to go until the price stability target of 2 percent is achieved.”

Japan’s economy grew at an annual rate of 1 percent in the first quarter, a government report showed Thursday. While gross domestic product expanded for a fifth straight quarter, the longest streak in a decade, inflation remains far away from the BOJ’s 2 percent target.

He said that the main reason was inflation expectations have declined “and have continued to be subdued.”

Kuroda has pledged to continue controlling Japan’s bond yield curve by keeping a short-term rate on bank reserves at -0.1 percent and pinning the benchmark 10-year yield at around 0 percent. The yield on the 10-year note has been between 0 percent and 0.1 percent for the past three months.

Most of economists forecast no policy change from the BOJ in coming months, even with inflation hovering just above 0 percent. In fact, most expect the BOJ’s next step to be tightening, given expectations for moderate improvement in inflation, and few tools left for further easing.

Now in a fifth year of its unprecedented quantitative easing, the BOJ has expanded its balance sheet to nearly the same size as Japan’s economy. That is unnerving some lawmakers, as is the fact that an end to the stimulus is nowhere in sight because inflation remains weak.

The BOJ is contending with a growing debate about a possible exit among market participants, the media and some lawmakers. Kuroda has faced calls from lawmakers from the ruling Liberal Democratic Party to explain how and when the central bank would exit its current easing program.

Officials realize it’s unrealistic and not constructive to try to remain silent on the issue and the BOJ is considering how to communicate its thinking about handling a future exit from stimulus, according to people familiar with central bank’s discussions.

The yen strengthened against the U.S. dollar and shares in Japanese banks and insurers surged after Bloomberg reported the central bank’s deliberations on Thursday.

“I continue to monitor exchange rate development and certainly could be concerned about, if the exchange rate deviated from what economists call the equilibrium range of exchange rate, substantially — upward or downward,” he told the audience during a question and answer session after the speech. “But we do not manage our monetary policy in order to stabilize the exchange rate.”

Kuroda, who earned a masters degree in economics at Oxford in 1971, spoke as the U.K. election was under way. The result could strengthen the yen, as happened following the Brexit vote last year.

As of Thursday afternoon in Tokyo, the yen has weakened about 15 percent against the dollar since Kuroda’s BOJ began its record easing in 2013, helping boost stock markets, corporate profits and household sentiment. Any reversal could make Kuroda’s battle to eradicate Japan’s “deflationary mindset” more difficult by also reducing inflationary pressures in the economy through lower import costs.

Speculation is rising about whether Kuroda might serve another term when his current one ends in April next year. He has declined to comment on whether he could be reappointed. Many private economists in Tokyo say there is a chance he will be.