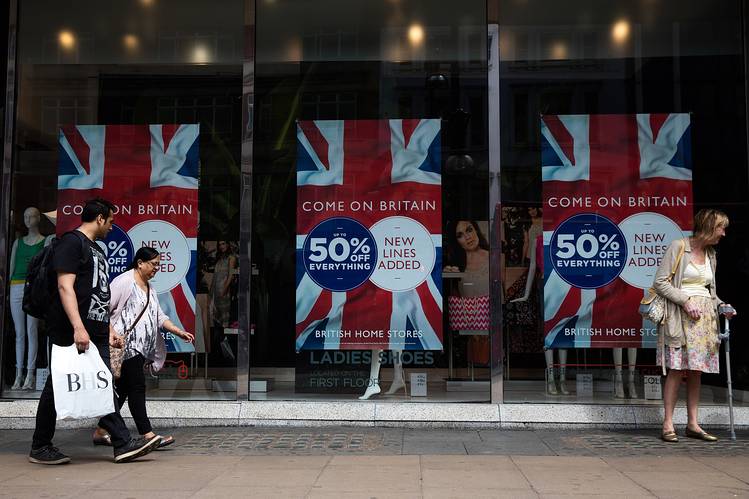 U.K. retail sales recorded their largest decline in seven years in the first quarter as consumers felt the pinch from accelerating inflation.

The volume of goods sold in stores and online fell 1.4 percent from the previous three months, the most since early 2010, the Office for National Statistics said on Friday. In March alone, sales dropped 1.8 percent, far exceeding the 0.5 percent decline forecast by economists.

The figures bode ill for an economy that relies heavily on consumer spending. Growth almost certainly cooled in the first quarter and is expected to slow further this year, putting pressure on the Bank of England to keep interest rates at a record low. Retail sales last declined during a quarter in 2013.

The sales weakness “seems to be a consequence of price increases across a whole range of sectors,” ONS statistician Kate Davies said.

Consumers also face a period of heightened political uncertainty after Prime Minister Theresa May this week called a surprise general election in a bid to strengthen her hand in the coming Brexit talks.

Households are being squeezed by rising food and fuel costs, the result of the pound’s 14 percent drop since the June vote to leave the European Union. The price of retail goods sold in March increased an annual 3.3 percent, the most since March 2012.

Sales fell across the board on the month, with only department stores seeing an increase. Clothing and footwear fell 0.9 percent, sales of household goods were unchanged and a category that includes everything from floor coverings to jewelry plunged 7.7 percent. Food sales fell 0.5 percent. Overall sales excluding auto fuel dropped 1.5 percent on the month.

The drop over the quarter knocks 0.08 percentage point off growth, the ONS said. Compared with a year earlier sales growth slowed to 1.7 percent from 3.7 percent. The seasonal-adjustment process removes the effect of the Easter holiday, which fell in March last year but in April this year.

Retailers were already facing pressure on margins from rising import costs and a higher minimum wage. Next Plc, which has warned of a challenging 2017, has fallen 14 percent this year, underperforming the FTSE 350 Index as a whole.

An initial estimate of growth in the first quarter will be published on April 28, with economists predicting a slowdown to as little as 0.4 percent, the least in a year. Growth has been driven by households borrowing more and saving a smaller share of their income than ever before, a situation analysts say is unsustainable.