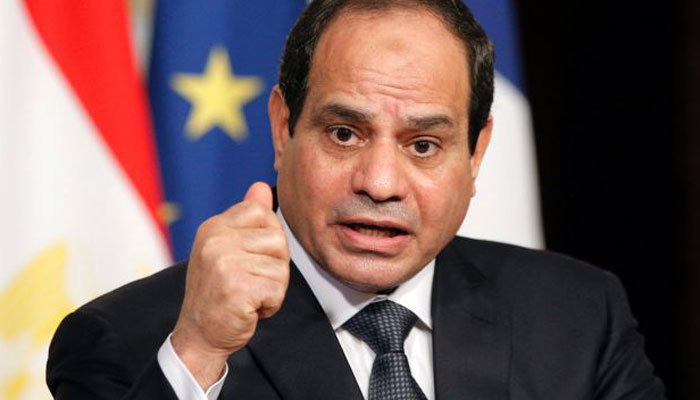 Sunday’s declarations suggested a tougher approach to come against militants whose simmering war with the government has strained efforts to stabilize the country and revive an economy battered by years of unrest. Even before the new measures, Egypt’s onslaught against Islamists and other dissidents has been criticized by Western governments and human rights groups.

The attacks earlier in the day were the deadliest strike on the country’s Christian minority since El-Sisi was elected in 2014. They also reflected the potential for a troubling expansion of the militants’ theater of operations, at a time when Egyptians’ patience with reforms is being tested by soaring prices linked to the November decision to float the currency.

“I ask Egyptians to bear the pain,” El-Sisi said in a televised speech after the attacks.

At least 27 people were killed and more than 70 wounded in the first blast in the Nile Delta city of Tanta. A second explosion in a Coptic cathedral in the Mediterranean city of Alexandria left at least 16 others dead, officials said.

The bombings came less than a week after El-Sisi met President Donald Trump at the White House, where he was praised for his efforts to fight terrorism. Trump tweeted on Sunday that he’s “sad to hear about the terrorist attack in Egypt” and has “great confidence that President Al Sisi will handle the situation properly.” He later spoke with the Egyptian leader by phone to express his condolences and offer support, the Egyptian presidency said in a statement.

By targeting two major cities outside its base in the northern Sinai Peninsula, Islamic State showed it’s “still able to operate — despite this growing pressure — and to embarrass the Egyptian government after Sisi’s visit to Washington” and before Pope Francis’ visit this month, said Michael Horowitz, director of intelligence at the political risk consultancy Prime Source.

In a televised address, the Egyptian leader said the state of emergency would go into effect after necessary constitutional measures were taken — largely a formality after he’d earlier ordered the military to deploy nationwide to help secure vital institutions and infrastructure.

The new anti-terrorism body will be staffed at the highest level and granted the authority to take whatever action is needed to “adjust the whole situation, whether it’s related to the media, the judiciary, legal and religious discourse,” he said.

The twin bombings bore the hallmarks of the Islamic State — multi-pronged attacks aimed at inflicting as much damage as possible while minimizing the group’s losses. Suicide bombers were believed to be involved in both assaults, state media reported.

The violence was “a mixed bag” for El-Sisi, said Samuel Tadros, a senior fellow at the Hudson Institute in Washington.

“On the one hand it reinforces his narrative that Egypt is in war against terrorism, rallying the nation around the flag and so forth,” Tadros said. “At the same time the attacks send a message of incompetence of the security apparatus” in containing the militancy, he said.

If the jihadist group proves able to operate more extensively outside of Sinai, “that would be a very dangerous development,” he added.

The violence against civilians also dealt the president a fresh blow at a time when impatience is mounting with the pace and impact of economic reforms.

November’s decision to abandon currency controls helped to secure a $12 billion International Monetary Fund loan and attract foreign investors. Yet it has also caused the pound to lose half its value against the dollar, sending prices soaring. Annual core inflation climbed to over 33 percent in February.

The militant threat exploded after the 2013 military-backed popular uprising against Islamist President Mohamed Mursi and the deadly crackdown on his Muslim Brotherhood group that followed. The expansion of the attacks outside the confines of Sinai and, according to Egyptian media, a new focus on targeting Christians have only proven the jihadists’ resilience.

A deadly bombing at the Cairo cathedral in December, claimed by Islamic State’s local affiliate, killed at least 25 worshippers. In 2015, the affiliate also claimed responsibility for the downing of a Russian jet near the Red Sea resort of Sharm El-Sheikh, an attack that left 224 dead and dealt the vital tourism industry a blow from which it’s yet to recover.

The latest bombing “won’t be the last terrorist attack, because the state fights terrorism but doesn’t fight terrorism-inspiring ideas, which is the main cause of the problem,” billionaire businessman Naguib Sawiris, one of Egypt’s richest men, wrote on his Twitter account.