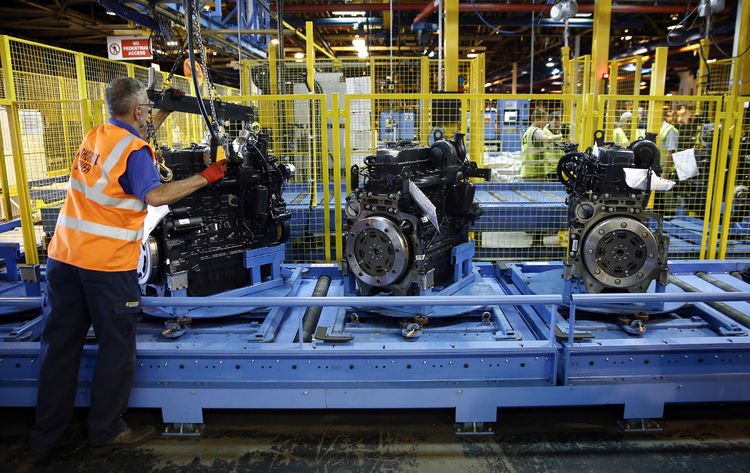 U.K. manufacturing and construction shrank in January, pointing to a loss of economic momentum in the first quarter.

The figures follow a strong end to 2016, and there is little evidence of a dramatic slowdown as Brexit talks loom, with the falling pound continuing to underpin exports.

But households are starting to feel the squeeze from soaring prices, putting a brake on the engine of the British economy. While budgetary officials see growth barely slowing to 0.6 percent this quarter, Markit Economics says its surveys indicate 0.4 percent, which would be the slowest pace in a year.

The fall in manufacturing was larger than economists expected. January saw a 14 percent drop in the volatile pharmaceuticals sector, which was partially offset by higher production of vehicles. Overall industrial output was underpinned by higher oil and energy output. Production rose 3.2 percent from a year earlier, with manufacturing gaining 2.7 percent.

The biggest pressures on construction came from repairs and maintenance, housing and private industrial work. New construction orders in the fourth quarter fell by 2.8 percent.

For many firms, rising input costs remain the biggest concern, with the squeeze on profitability offsetting the competitive edge gained from the weak pound.

Goods’ exports climbed 1.6 percent in January, the fourth consecutive month of increase, and imports rose 0.9 percent. It left the trade deficit marginally lower than in December at 10.8 billion pounds.

The economy grew 0.7 percent in the fourth quarter, and revisions published Friday suggest that could be revised slightly higher.

Industrial output rose 0.4 percent instead of 0.3 percent and construction was revised to growth of 1 percent from 0.2 percent. Together the changes add 0.05 percentage point to GDP.

Trade also put in a better performance than previously thought, with the deficit in goods and services narrowing to 5 billion pounds from 13.8 billion pounds in the third quarter. The fourth-quarter shortfall was initially estimated at 8.6 billion pounds.

The downward revision suggests net trade’s contribution to growth in the period was even stronger than the 1.3 percentage points currently estimated.