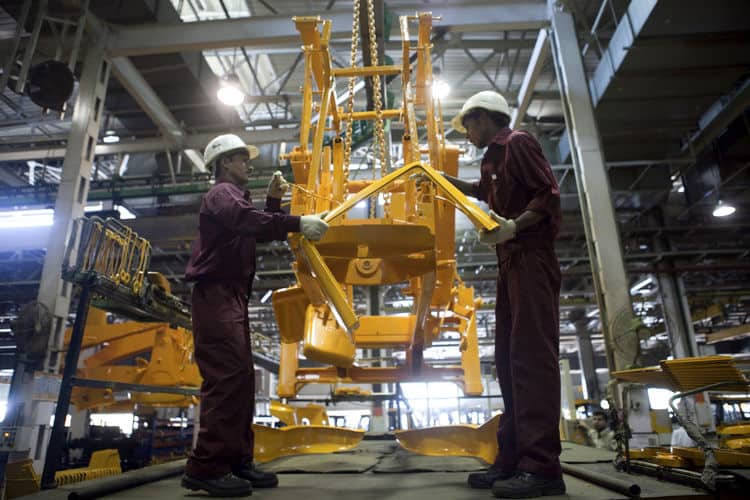 Imports jumped 44.7 percent, almost double what economists had projected, while exports rose 4.2 percent in February in yuan terms, less than the 14.6 percent estimate in a Bloomberg survey. That left a trade deficit of 60.4 billion yuan ($8.8 billion), the first negative reading in three years.

Economists said the results were skewed because the week-long Lunar New Year holidays that shutter factories and ports across the nation occurred in February 2016 versus late January this year, distorting base year comparisons. In the first two months exports rose 11 percent, outpacing the 0.4 percent advance in the fourth quarter, Julian Evans-Pritchard, a China economist at Capital Economics in Singapore, wrote in a note.

“The latest trade data suggest that, seasonal distortions aside, both exports and imports strengthened at the start of 2017,” Evans-Pritchard wrote. Surging imports reflect rising commodity prices and external demand probably will remain fairly strong in coming quarters and continue supporting shipments, he said.

China should be cautious about “fake imports,” Li Daokui, a professor at Beijing’s Tsinghua University and former adviser to the People’s Bank of China, said in an interview last week. Some capital outflows are disguised as trade, he said.

“Imports surged as economic activity is on the recovery and on the increase in commodity prices,” said Wen Bin, a researcher at China Minsheng Banking Corp. in Beijing. “Exports missed estimates mostly because trade is generally very volatile in the first two months due to the Chinese New Year factor,” he said, adding that data for the first two months show that the external sector this year is better than last year.

China set a 2017 growth target of “around 6.5 percent, or higher if possible” in the work report Premier Li Keqiang delivered to the legislature Sunday, versus last year’s 6.5 percent to 7 percent range. China will ensure “foreign trade continues to pick up and register steady growth,” the report said.

The world’s largest exporter faces more challenges and uncertainties this year. President Donald Trump has accused China of unfair trade practices and is now in a position to carry out threats, with Commerce Secretary Wilbur Ross sworn in. Measures will be announced “as soon as we have a proper case,” Ross said last week in a Bloomberg Television interview.

“Getting a clear read on China’s trade at the start of the year is tough,” Bloomberg Intelligence economists Tom Orlik and Fielding Chen wrote in a report. “This year, it’s especially difficult as calendar and base effects compound. That said, the early signs are positive, with exports registering solid growth and imports way up.”