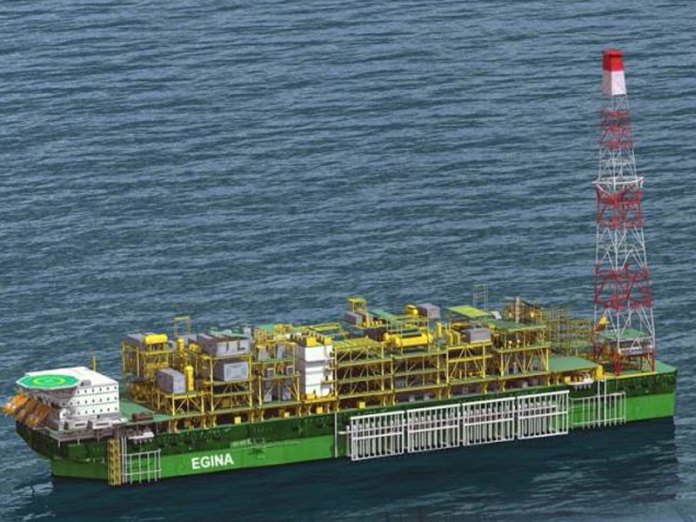 Total Exploration and Production Nigeria Limited has stated that crude oil production from its Egina deep-water field would add 200,000 barrel per day (bd) of oil to Nigeria’s production volumes in 2018, representing about 10 per cent of the country’s total output.

Total’s Deputy Managing Director in charge of Deep Water District, Ahmadu-Kida Musa stated this during an interaction with journalists at the just concluded 16th edition of the Nigeria Oil and Gas (NOG) Conference and Exhibition in Abuja.

Musa said Total decided on the Egina project at a time Nigeria’s policies for her oil and gas sector were extremely uncertain, especially with Petroleum Industry Bill (PIB) repeatedly failing to pass through legislative processes. He added that the company now looked forward to bringing it on stream in 2018.

Located some 130 kilometres off the coast of Nigeria at water depths of more than 1,500 metres, Musa explained that the Egina oil field has remained one of Total’s most ambitious ultra-deep offshore projects.

He also informed the Minister of State for Petroleum Resources, Dr. Ibe Kachikwu who called on Total’s exhibition stand at the NOG, that the project is being developed locally to accelerate the pace of technology transfer and expand the reach of the government’s local content law.

“Egina project is our flagship project; it is going to contribute 200,000 barrels a day of oil next year to Nigeria’s production. In any form of analysis, it is like 10 per cent of Nigeria’s production volume. This is our contribution and it was not a mistake but a bold statement we made three years ago when we embarked on this project at a time nobody wanted to invest and PIB was the headline in every newspaper and a good excuse for people who are not here for the long term to not invest. Total is in Nigeria for the long term and you can see the fruits of it. We will contribute an additional 200,000 barrels per day of oil next year,” he added.

Musa also spoke about the company’s operations in Nigeria’s domestic gas industry, as well as the power sector.

According to him, Total is in the forefront of gas investment and recognising and keying into the Federal Government’s plan in terms of domestic gas.

“We built a dedicated gas line to take gas from Rumuji to Owaza, specifically and only just for domestic gas and our first client is the Alaoji IPP, and that is it for us,” he said.

“The challenges are very numerous. Clearly just as the minister said earlier, the investments that we need to make, the utilisation of the facilities even when they are built, and even when you sell the gas, you expect to be paid on time, but we all know this is normally a challenge even for well-established institutions.

I know we have quite a good number of gas that could be supplied to the power generation companies to produce more electricity, what I am very certain about now is that Nigeria needs to improve on its distribution system where you transmit the electricity you generate to consumers, I think that is where we need to work on very well,” he added.