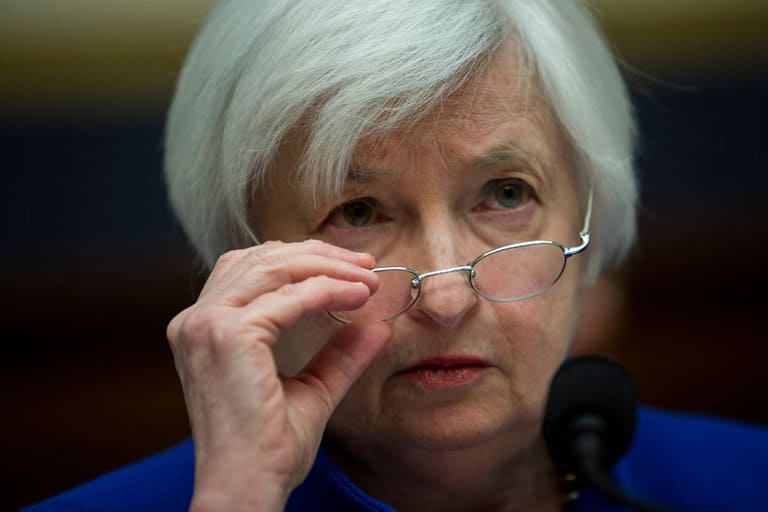 “At our meeting later this month, the Committee will evaluate whether employment and inflation are continuing to evolve in line with our expectations, in which case a further adjustment of the federal funds rate would likely be appropriate,” Yellen said in the text of a speech Friday at the Executives’ Club of Chicago.

The Fed will announce whether it’s raising rates on March 15 following a two-day meeting in Washington. A March 10 employment report is the most significant data standing between officials and decision day, and economists expect a solid 190,000 payrolls gain in February. The central bank will get a Consumer Price Index inflation reading March 15, but won’t get another look at its preferred inflation index until March 31.

Markets see a better than 90 percent chance of a rate hike this month, up from just 40 percent a week ago, after top Fed officials including New York Fed President William Dudley and Governor Lael Brainard signaled they’re willing to lift rates soon. Inflation and employment data have been meeting policy makers’ expectations, and growth abroad is either stable or slowly improving, clearing the way for gradual increases.

“I currently see no evidence that the Federal Reserve has fallen behind the curve, and I therefore continue to have confidence in our judgment that a gradual removal of accommodation is likely to be appropriate,” Yellen said Friday. However, “unless unanticipated developments adversely affect the economic outlook, the process of scaling back accommodation likely will not be as slow as it was during the past couple of years.”

Fed Vice Chairman Stanley Fischer, speaking in New York on Friday, gave his own roundabout endorsement of a March hike. He said that if there’s a “conscious effort” to boost rate expectations, “I’m about to join it,” and he “strongly” supports the views given by a number of Federal Open Market Committee members.

“There is almost no economic indicator that has come in badly in the last three months,” Fischer said at a forum hosted by the University of Chicago’s Booth School of Business.

The reaction in bonds and stocks to Yellen and Fischer was muted. The yield on two-year U.S. Treasury notes, was little changed at about 1.33 percent at 1:31 p.m. in New York. The S&P 500 Index of stocks declined less than two points to about 2,379.

At the start of 2016, central bankers expected to make four rate increases, but a slump in first-quarter economic data and market volatility coming from abroad kept them on hold until December, when they squeezed in their one and only hike. That followed a single increase in 2015.

Lifting the benchmark rate this month would leave the Fed well-positioned to achieve the three 2017 hikes that officials expected in December, when they released their latest Summary of Economic Projections. They will publish new estimates following this month’s meeting.

Data suggest the central bank is closing in on its two goals: stable inflation near 2 percent and maximum employment. The Fed’s preferred inflation gauge has moved up to 1.9 percent, though that partly owes to volatile oil prices and part of the move could prove transitory.

Unemployment has fallen to 4.8 percent, roughly in line with the level the Fed views as sustainable over the longer term. What’s more, some wage measures are showing nascent signs of life, an indication that labor markets are tightening.

Perhaps the largest difference from last year is that as the U.S. economy makes strides, fewer risks loom on the global economic horizon to scare Fed officials off of raising rates.

“On the whole, the prospects for further moderate economic growth look encouraging, particularly as risks emanating from abroad appear to have receded somewhat,” Yellen said in her prepared remarks. “The Committee currently assesses that the risks to the outlook are roughly balanced.”

Fed officials have expressed a preference for waiting until rate hikes are well under way before beginning to shrink their $4.5 trillion balance sheet, which grew during three rounds of asset purchases following the latest recession. Central bankers aren’t exactly sure how shrinking the balance sheet will affect financial conditions, as several have expressed a preference for allowing securities to roll off gradually as they mature.

Yellen reiterated support for that policy in the footnotes of her speech Friday. “We have said that we expect to maintain this policy until normalization of the level of the federal funds rate is well under way,” she said. “When it becomes appropriate to reduce the size of our balance sheet” that will be done primarily by letting maturing assets run off.