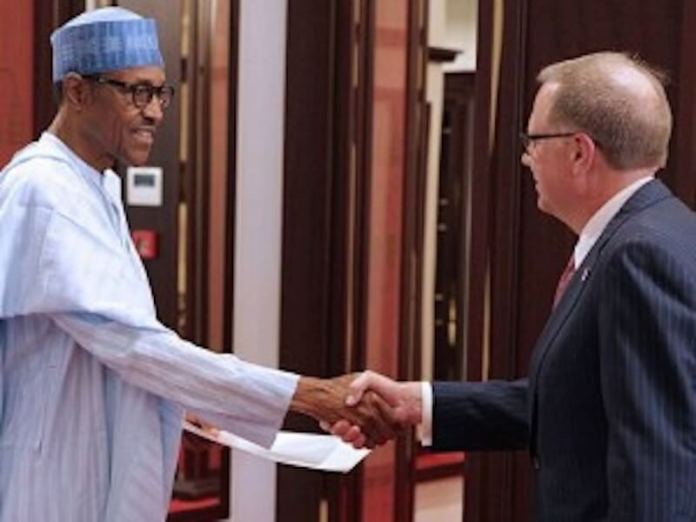 The German Ambassador to Nigeria, Mr. Barnhard Schlagheck and the British High Commissioner to Nigeria, Mr. Paul Arkwright, yesterday visited Lagos State Governor, Akinwunmi Ambode, with a promise to further advance the relationship between their countries and Lagos State.

Schlagheck said he was at Lagos House to further advance the relationship between his country and Nigeria and to lay a solid foundation for improvement, especially with the German-Lagos relationship.

He said he had been very impressed with the very impressive moves and policies pursued in Lagos under Ambode, saying that Lagos has shown to Nigeria how the country can overcome the economic challenges and once again become a model for prosperity and progress.

The envoy specifically commended Ambode for the innovative traffic management strategy, the LAKE Rice initiative and the remarkable efforts to bring in foreign investors to the State.

On his part, the British Commissioner said his visit was principally to advance the partnership between his country and Lagos, saying that the state, being the heartbeat of Nigerian business, is central to his vision of promoting trade, investment, job creation and growth in Nigeria and Britain.

He also commended Ambode for his vision for the state, and expressed readiness to work with the State for mutual benefit to the Nigeria and Britain, and by extension, Lagos.

“We have had prior discussion talking about some of the priorities of the Governor and I am very impressed by his vision for State of Lagos. We have talked about Transport, Housing, and Aviation links which are extremely important as we look to Lagos to really help to drive the economy of Nigeria and pull the country out of the current economic difficulties and I assure that the United Kingdom will be your partner in this,” Arkwright said.

Earlier, Ambode said the vision of his administration to create a more prosperous and safer Lagos and transform the state into the hub of commerce and tourism in Africa.

He said he remained committed to transforming Lagos from being the commercial hub of Nigeria to that of Africa, just like London is the hub of commerce and tourism in Europe.

He recalled the historical ties between Nigeria and Britain and vowed not only to continue to uphold the relationship and scale it up for the benefit of the people, but also ensure the protection of British nationals and their investments in the State.

“We want to appreciate the partnership that exists between us and the British Government and by extension the partnership existing between Britain and Nigeria. We know that as Lagos continues to be the commercial capital of Nigeria, whatever it is that we do together will obviously grow the GDP of Nigeria because 67 per cent of almost all the commercial activities in the country take place in Lagos.”