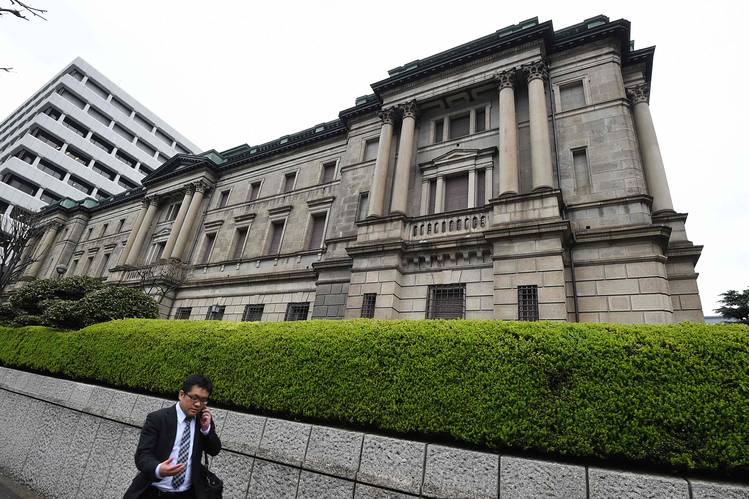 The Bank of Japan (BOJ) on Tuesday upgraded its economic assessment, citing improvement in exports and better business sentiment than previously envisaged. Both the yield-curve and asset-purchase programs were left unchanged.

However, inflation expectations remain weak and risks to the outlook abound, ranging from developments in the Chinese and U.S. economies to Brexit and geopolitical uncertainties.

Most analysts had already adopted the view that the BOJ would stand pat in coming months with its targets for short- and long-term interest rates, even before Trump’s election victory sent the yen tumbling, easing any pressure for additional action to stoke inflation. After the shock of negative rates in January, a comprehensive policy review midyear and new direction since September, a majority of economists surveyed by Bloomberg don’t expect any additional easing before Governor Haruhiko Kuroda steps down in 2018.

“In the spirit of the holiday season Kuroda delivered on cue with no surprises,” said Stephen Innes, a Singapore-based senior trader at foreign exchange firm Oanda Corp. While the upgrade of the economic assessment may further damp domestic easing expectations, “Trumpflation” is likely to see the dollar strengthen further against the yen, said Innes.

The focus for investors now moves to the BOJ’s efforts to contain a surge in yields amid a global bond sell-off. The central bank’s shift in policy framework in September to yield-curve control was meant to make its stimulus program more sustainable as it neared the practical limits of asset purchases.

Speaking in a news conference later Tuesday, Kuroda said it was too soon to discuss raising the long-term yield target or even the specifics of raising rates. He said the BOJ won’t raise the target in response to hikes abroad.

Kuroda said an appropriate yield curve had been achieved and current policy should be continued.

“Differences in monetary policies can have some impact on currencies, but at this moment I don’t see the prospect of the yen becoming a problem by weakening excessively,” Kuroda said. “The currency is at a level similar to around February, so it’s not at a surprising level.”

The yen weakened as Kuroda spoke, trading at an intraday low of 117.96 per dollar around 3:50 p.m. in Tokyo. It hit a 10-month low last week. A weak yen generates inflationary pressures through higher import costs, while boosting corporate profits that could filter through to wage growth.

The yen had gained about 13 percent this year before the U.S. election, and has since tumbled about 10 percent. Credit Suisse Group AG last week revised down its three-month prediction for the dollar-yen rate to 122 from 111.

Separately to the BOJ, which won’t provide numerical forecasts until its next meeting, the Cabinet Office released upgrades for its estimates for the economy, and Finance Minister Taro Aso confirmed fiscal spending plans:

The BOJ kept its rate on some bank reserves at -0.1 percent and reiterated its pledge to keep the yield on the 10-year Japanese government bond at around 0 percent. Both rates are core elements of the new framework it announced in September.

Surging global yields are posing a challenge to the central bank. It conducted its first fixed-rate operation to contain rising yields last month, and it increased purchases during a bond-buying operation last week.

Market participants are speculating that the BOJ will need to do more after the 10-year JGB yield hit 0.1 percent last week, a level seen by some as the upper limit of the central bank’s tolerance.

“No need for more easing doesn’t mean the BOJ is free from problems,” said Naomi Muguruma, a senior market economist at Mitsubishi UFJ Morgan Stanley Securities Co. “They said they can control a bond market and the market is already giving them a challenge.”