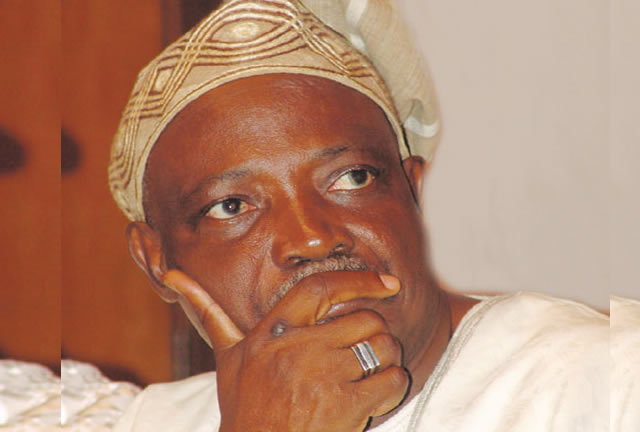 The Economic and Financial Crimes Commission on Wednesday re-arraigned a former Governor of Oyo State, Chief Rashidi Ladoja, alongside one Waheed Akanbi for an alleged fraud of N4.7bn.

The EFCC claimed that Ladoja and Akanbi committed the offence in 2007.

The charge, marked FHC/L/336c/08, was filed against them in 2008 and they were first arraigned before Justice A. R. Mohammed eight years ago.

Their re-arraignment before Justice Mohammed Idris of a Federal High Court in Lagos on Wednesday followed the dismissal of their appeal against the charges which went all the way to the Supreme Court over a period of seven years.

Seventy-two-year-old Ladoja appeared in court in a green agbada made of ankara fabric, a brown cap and black shoes while Akanbi was dressed in a black suit.

The eight counts pressed against them by the EFCC border on money laundering and unlawful conversion of funds belonging to the Oyo State Government to their own.

In one of the counts, Ladoja and Akanbi were accused of converting a sum of N1,932,940,032.48, belonging to Oyo State Government to their personal own, using a Guaranty Trust Bank account of a company, Heritage Apartments Limited.

The EFCC claimed that they retained the money sometime in 2007, despite their knowledge that it was a proceed of a criminal conduct.

In another instance, Ladoja was accused of removing the sum of £600,000 from the state coffers in 2007 and sent it to Bimpe Ladoja, who was at the time in London.

The ex-governor was also accused of converting the sum of N42m, belonging to the state, to his own and subsequently used it to purchase an armoured Land Cruiser jeep.

The EFCC claimed that Ladoja transferred the N77, 850,000 to one Bistrum Investments, which he nominated to help him purchase a property named Quarter 361, Ibadan, Oyo State.

The defendants, however, pleaded not guilty upon the charges being read to them.

The EFCC, lawyer, Mr. Oluwafemi Olabisi, consequently asked the court to fix a date for the commencement of trial.

But the defence counsel, Mr. Bolaji Onilenla and Mr. Adeyinka Olumide-Fusika, informed the court of their clients’ bail applications.

Onilenla, representing Ladoja, urged the court to allow his client to continue on the bail conditions granted him in 2008 by Justice Mohammed.

“The first defendant has kept full faith with the terms and conditions of the bail and there was no single incident of default,” Onilenla said, while assuring Justice Idris that his client would “behave himself” and make himself available for his trial.

In his bench ruling, Justice Idris held that the court could not deny the defendants bail on account of their exercising their constitutional right of appeal, which resulted in the delay of the case.