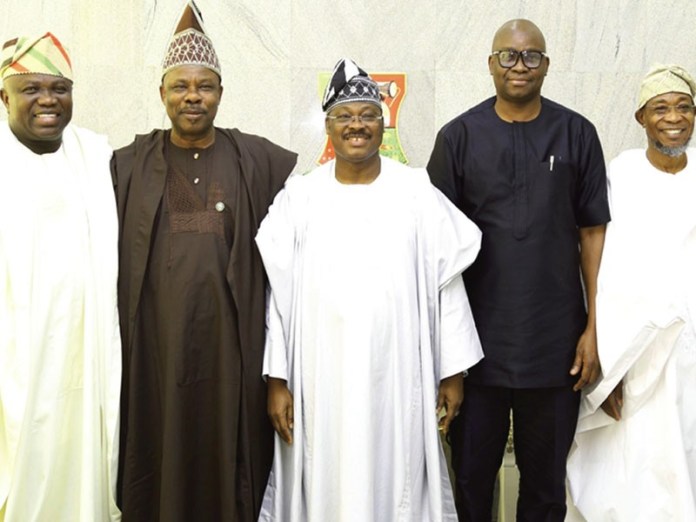 Nigeria’s former High Commissioner to the United Kingdom, Dr. Christopher Kolade, on Thursday called on governors of the six South-West states that own the Odu’a Investment Company Limited to shelve personal interests and party affiliation to ensure that the legacy of the founding fathers of the conglomerate was protected.

Kolade, who spoke at the 40th anniversary of the company and presentation of awards in Ibadan, said the regional conglomerate had the potential to be greater than its present status if the six governors met regularly and support the efforts of the firm’s management for its development.

The three former governors were presented with awards for their role in the formation of the conglomerate in 1976.

Representatives of the governors of Ondo, Ekiti, Lagos, Ogun and Osun were also present at the event, while a former Vice Chancellor of the Obafemi Awolowo University, Ile-Ife, Prof. Wale Omole, was the guest lecturer.

Kolade said, “The Odu’a concept is the way to go for future investment. If this company does well, we are bound to do well. If it succeeds, that means we have done well as a people. We must ask ourselves, what is the basis of our confidence as a people? The vision of this initiative that we are celebrating today is flawless; the mission is good; it is the execution that betrays us.

“The question is what do we have now that will secure the future of this company? If we are united by one language, for anything we decide and agree to do, there will not be limit to its success or where we can go.

“All of us celebrating Odu’a today, it is because we are united by one language; and if we remain together with passion, there will not be any limit to what we can achieve. This is my confidence for the future we are talking about so that in the nearest future, the world will recognise Odu’a as a worthy international conglomerate.”