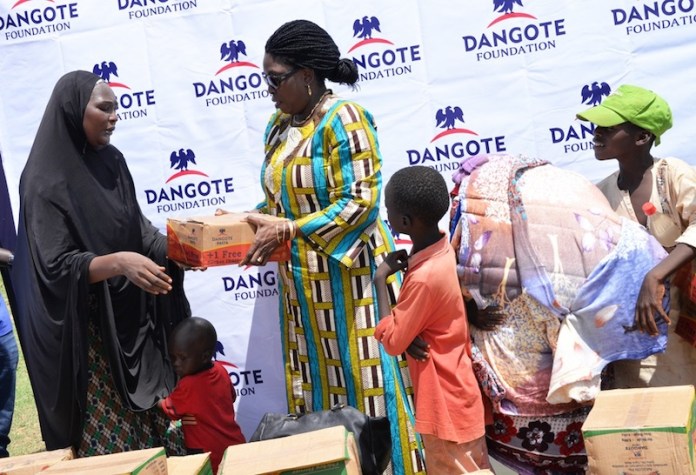 Moved by the plight of the Internally Displayed Persons (IDPs) and returnees in Yobe State, many of whom have been hit by starvation, Dangote Foundation has flagged off the distribution of food and other relief items worth over N100 million to IDP camps in the state, thus growing its intervention to N1.3 billion.

The Foundation said its support to the IDPs and other returnees across the North eastern states has grown up to N1.3 billion in the light of recent ugly developments in the camps that necessitated fresh interventions.

Chief Executive of the Foundation, Zouera Youssoufou appealed to individuals and organization to rise up to be counted at this time of hardship for the IDPs, noting that no humanitarian assistance is too small to render to the people in IDPs as most of them are ravaged by hunger.

Youssoufou who flagged off the distribution in company with the Deputy Governor, Yobe State, Abubakar Aliyu disclosed that all the IDP camps in the 32 communities would benefit from the donation.

Speaking at the event the Deputy Governor, expressed the state government’s heart-felt gratitude to the Chairman, Dangote Foundation, Alhaji Aliko Dangote for his genuine concern towards the plight of IDPs in the State.

He recounted previous donations made by the richest man in Africa towards improving health care delivery and eradication of polio in the State.

Said he: “I am highly delighted to welcome Alhaji Aliko Dangote to Yobe State and also thank him for his laudable decision to donate relief materials including rice, spaghetti, noodles, salt, sugar, Dangote seasoning worth millions of naira to IDPs who have suffered untold hardship due to insurgency in the state. I wish to categorically state that Dangote Foundation has made previous donations towards great causes including eradication of polio in the state.”

He noted that with the restoration of peace and significant improvement in security across the North East especially in Yobe State, Dangote’s intervention could not have come at a better time as the gesture would help the returnees find their feet since most of the IDPs across various camps have not cultivated farmlands or engaged in activities to sustain their livelihood in the last 2 years.

Engr. Aliyu made a commitment that the food items will be judiciously distributed to bring succor to the IDPs and returnees and further asked for more assistances from the government, business development partners, philanthropic organizations and other stakeholders to help tackle the challenges of rehabilitation, reconstruction, re-integration and peace building in the second most affected state by insurgency in Nigeria.

In her remark, the Foundation CEO conveyed the readiness of Alhaji Aliko Dangote to contribute to peace and security in all parts of Nigeria describing the situation in the North East philosophically as “injury to one is injury to all, because we are our brother’s keeper.”

Youssoufou expressed her appreciation for the warm reception and the opportunity to fulfill the commitment of the Dangote Foundation which is alleviating poverty and ameliorating the sufferings and pains of vulnerable people in the society.

She said “Dangote Foundation is committed to alleviating poverty and the suffering of vulnerable people in the society through intervention initiatives that impacts lives positively and engenders socio economic development. “

”The Foundation boss further said the Foundation is primarily committed to reducing the number of lives lost to malnutrition especially in children and also providing intervention in the focus areas of education, health and economic empowerment.”

The host Local Government Chairman of Gubja, Alhaji Kijari Batarama noted that “Dangote Foundation’s donation today is a clear demonstration of support and concern for the plight of IDPs and it bears witness to his genuine sympathy of Alhaji Aliko Dangote to the victims of insurgency in the state.

“I am glad to inform you that return of peace in some of these areas has allowed for commencement of farming activities which resulted in bumper harvest during the outgrowing cropping season, complementing efforts in provision of food and attainment of food security.”

He stated further that the return of IDPs has seen the total number of school enrolment rise to 6,819 pupils across 10 different communities and called for more support to help transform lives of returnees and restore affected villages to prosperity.

It would be recalled that since Dangote Foundation commenced its intervention programme in the North East since July 2016 and has since donated 106 trailer load of food items worth 1.3 billion naira in Borno State. The Dangote Foundation will also be committing additional 2 billion naira in supporting government reconstruction efforts in the North East.