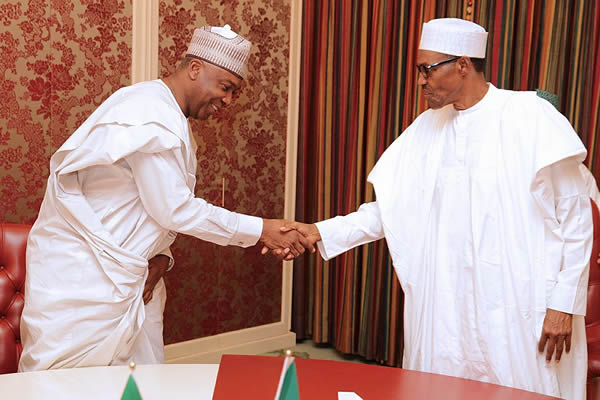 President Muhammadu Buhari and the President of the Senate, Bukola Saraki, on Friday met behind closed doors again in continuation of consultations on the President’s $30bn loan request which was rejected by the Senate recently.

The Friday meeting was the third time the two leaders would be meeting within one week on the issue.

They had earlier met on Friday last week and Wednesday.

Like the Wednesday meeting, journalists were not allowed to cover the meeting on Friday which was described as private.

The meetings are coming after the Senate rejected Buhari’s request for approval to take $30bn foreign loan.

The Senate had also dismissed the Medium Term Expenditure Framework submitted to it for approval, describing it as “empty.”

The document was said to have been returned to the executive.

Saraki had after the last Friday meeting told State House correspondents that the issue of the foreign loan was work in progress.

He had also warned Nigerians not to see the issue of the loan as a reflection of the kind of relationship that exists between the Executive and the National Assembly.

resident Muhammadu Buhari on Friday called on African leaders to form a strong united front to defeat terrorism and violent extremism which he said were inhibiting development on the continent.

A statement by his Senior Special Assistant on Media and Publicity, Garba Shehu, quoted the President as saying this while receiving Kenya’s Deputy President, William Ruto, at the Presidential Villa, Abuja.

Buhari lamented that Africa was still grappling with acts and effects of terrorism after a successful decolonisation campaign. While acknowledging the cooperation between Nigeria and Kenya in the fight against terrorism, the President commended the East African country for the recent successes recorded in tackling terrorism in the region.

“A situation in which insecurity continues to obstruct the process of national development should not be allowed to continue,” the President told his guest who is a special envoy of President Uhuru Kenyatta.

On the forthcoming election of a new leadership for the African Union Commission, Buhari said African States need a very strong leadership at the AUC that would encourage member states to refocus their resources and energy toward human and national development.

On Kenya’s request for Nigeria’s support for the candidature of Kenya’s Foreign Minister, Ambassador Amina Mohammed, who is vying for the AUC chairperson, the President said Nigeria would consult with other African leaders on the need for a strong and capable leadership that would respond to the current challenges facing the continent.

While commending Buhari for his leadership, particularly on regional security and the fight against corruption, Ruto said the President’s effort to eradicate terrorism and violent extremism had emboldened the continent’s resolve to achieve lasting peace and security.

We Won’t Force Companies to List on NSE – Osinbajo