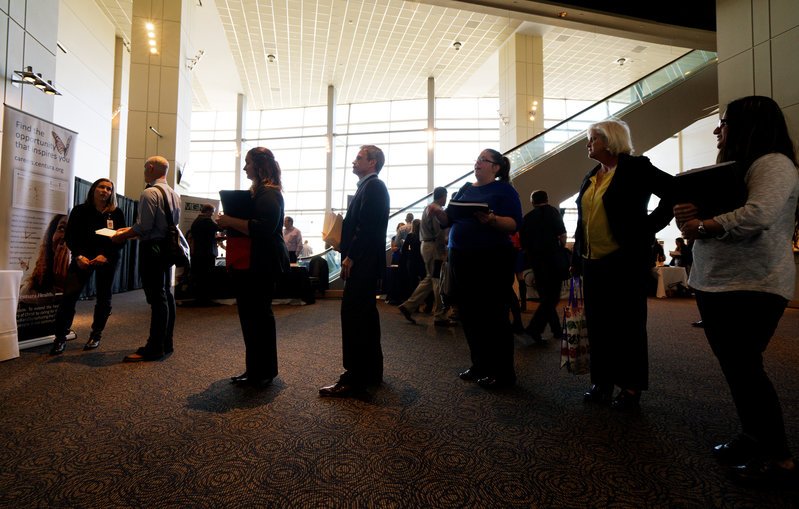 U.S. jobs continued to rise at a steady pace in October and wage gains accelerated, signs that the labor market and economy made steady progress at the start of the fourth quarter.

Payrolls climbed by 161,000 last month following a 191,000 gain in September that was larger than previously estimated, a Labor Department report showed Friday. The median forecast called for 173,000. The jobless rate fell to 4.9 percent, while wages rose from a year earlier by the most since June 2009.

The figures are likely to keep the Federal Reserve on track to raise borrowing costs next month for the first time in 2016. Underlying the steady gains in employment is a balance between hiring managers’ need to keep up with stable domestic demand and the struggle to match more limited labor to skilled-job vacancies.

“The pace of job growth remains pretty steady,” said Russell Price, a senior economist at Ameriprise Financial Inc. in Detroit, who had projected payrolls at 165,000. “We’re starting to see wages pick up a little. The report supports the idea that the opportunity is there for the Fed to raise rates, and it’s certainly appropriate for them do so” in December.

Workers have been in short supply for 13 straight months, according to the Institute for Supply Management survey of service-industry companies, which make up almost 90 percent of the economy.

The median forecast in a Bloomberg survey called for a 173,000 advance in payrolls. Estimates in the Bloomberg survey ranged from gains of 105,000 to 208,000 after a previously reported 156,000 September increase.

Revisions added a total of 44,000 jobs to payrolls in the previous two months.

The unemployment rate, which is derived from a separate Labor Department survey of households, dropped from 5 percent the prior month, returning to its level from August.

While economists and policy makers largely agree that the U.S. economy is close to full employment, blemishes remain, with the ranks of part-time workers and long-term jobless still higher than before the last recession.

The labor force participation rate, which indicates the share of working-age people who are employed or looking for work, slipped to 62.8 percent from 62.9 percent, as the number of people in the labor force declined.

The government’s underemployment rate dropped to 9.5 percent in October from 9.7 percent, while the number of people working part-time for economic reasons was little changed, according to Friday’s report. Some 5.89 million American employees were in part-time jobs but wanted full-time work.

Wage gains picked up, with average hourly earnings rising 0.4 percent from a month earlier to $25.92. The year-over-year increase was 2.8 percent, compared with 2.7 percent in the year ended in September.

The average work week for all workers was unchanged at 34.4 hours in October.

Among service providers, education and health services led with an increase of 52,000 jobs, followed by professional and business services at 43,000. Retailers pared payrolls by 1,100 on declines at electronics and appliance stores and clothing shops.

Factories reduced payrolls by 9,000 after an 8,000 decline the month before, in line with a report earlier this week that showed manufacturing barely expanded in October while orders moderated. Employment at construction companies rose by 11,000.

Friday’s figures showed 238,000 Americans weren’t at work because of weather during the survey week, even though they were counted as employed in the household survey, the agency said. Bad weather can affect the payroll count if employees didn’t receive compensation for the entire pay period that included the 12th of the month.

Hurricane Matthew’s assault on the East Coast was just fading at the start of the week with the 12th. The storm moved up the Florida coastline on Oct. 7 before making landfall in South Carolina the following day and continuing on to North Carolina, causing flooding and power outages along the way.
The labor-market figures offer a last big hint at the direction of the economy before Americans flock to the polls Nov. 8.

Figures released last week on the third-quarter pace of growth offered a mixed picture. While gross domestic product increased at a 2.9 percent annualized rate for the strongest pace in two years, inventory rebuilding and a soybean-related jump in exports largely fueled the rebound. Consumer spending slowed more than expected.

Fed policy makers who concluded a two-day meeting Wednesday in Washington offered an assessment of the economy that was broadly similar to their September statement, reinforcing the consensus view that they will raise the benchmark interest rate in December for the first time this year.

The central bankers reiterated that the “labor market has continued to strengthen and growth of economic activity has picked up” since the first half of 2016. Even so, they opted to wait for “some further evidence” of progress before increasing borrowing costs.