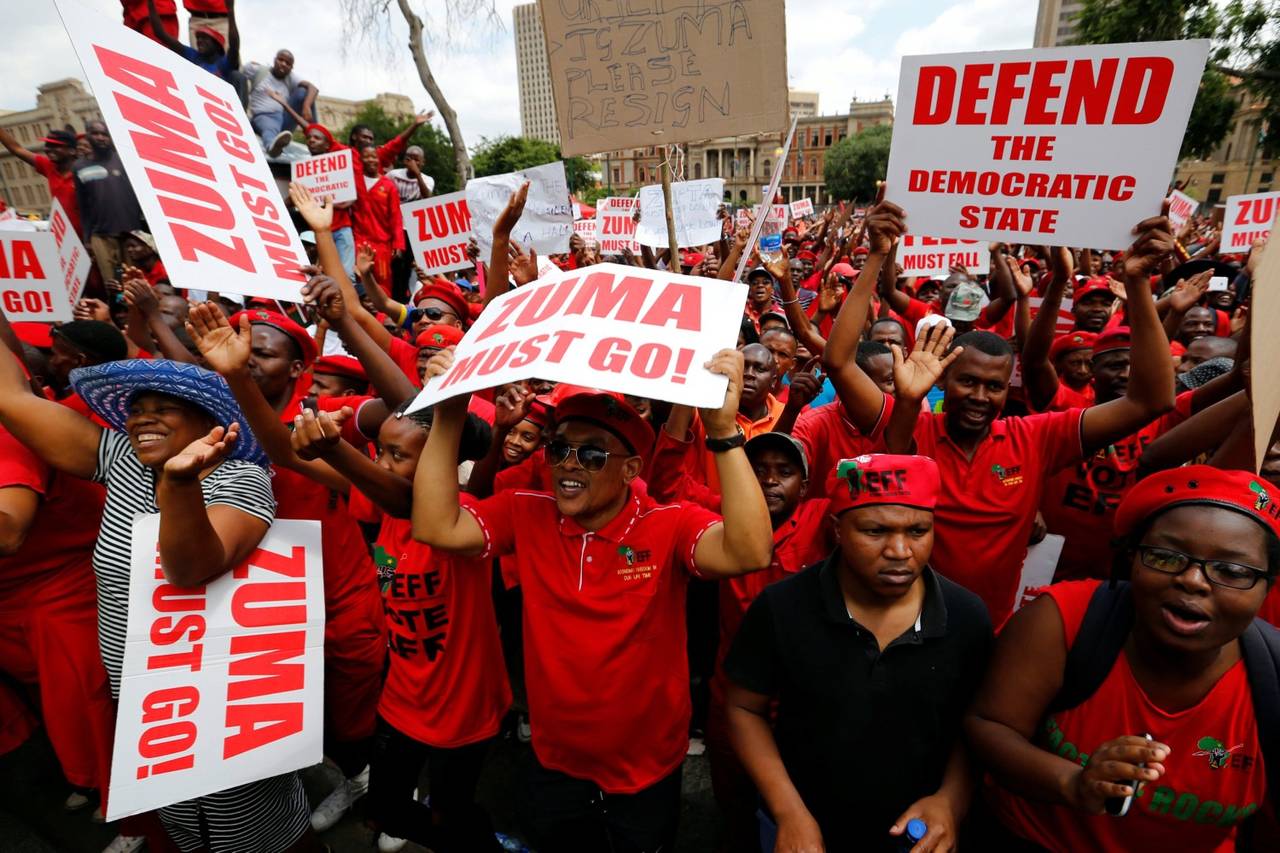 A day of political shock waves in South Africa put new pressure on President Jacob Zuma,as an official report alleged that one of the country’s richest families influenced cabinet appointments and thousands took to the streets of Pretoria to demand his resignation before his second term ends in 2019.

Commentators called the report the biggest political scandal since South Africa’s transition to democracy and said the allegations, if confirmed, could mark a turning point in a brutal leadership battle within the ruling African National Congress that has pittedMr. Zuma against Finance Minister Pravin Gordhan over control of state finances and the future direction of the ANC.

The tussle has rocked South Africa’s currency, the rand, and other assets at a time when Africa’s most developed economy is already roiling from the commodities downturn and more than a fourth of its workforce is unemployed.

The public protector’s so-called state capture report, which was released Wednesday after court challenges by Mr. Zuma and two of his ministers had blocked it for weeks, said there were worrying indications that the wealthy Gupta family, Indian immigrants who own a business empire, influenced the appointments of ministers in Mr. Zuma’s government.

“It appears crimes have been committed,” the report said, citing cellphone records of Mr. Zuma and several ministers to support corruption allegations.

The 355-page report also said extensive financial analysis suggested that a Gupta-owned mining company in which Mr. Zuma’s son Duduzane holds a significant stake was given lucrative government contracts to finance its expansion. The Gupta family’s attorney said the report “was riddled with errors and subject to rebuttal.”

Mr. Zuma’s office said the president was examining the report. His son has previously denounced the allegations against him as a “sustained political attack.”

The report didn’t make definitive findings, saying its author, then-Public Protector Thuli Madonsela, was denied sufficient resources to conduct a full investigation. It recommended that a full probe of Mr. Zuma’s dealings with the Guptas should be conducted by a commission of inquiry, with the findings published within 180 days.

“This is absolutely devastating for the president. There are several instances where the president is placed directly at the scene of the crime,” said Pierre de Vos, constitutional-law scholar at the University of Cape Town. “[The ANC] will have to decide whether this is such a fatal blow to the president that he must leave.”

Mr. Zuma—a former intelligence chief with the ANC’s military wing during the apartheid era who spent a decade in jail with Nelson Mandela on Robben Island—has spent much of his political career sidestepping scandal. Corruption allegations related to an arms-procurement deal dogged his career for more than 15 years. In 2005, he was charged with raping a friend’s daughter. He was found not guilty the following year and in 2009 the corruption charges were dropped.

Known as a conciliator and party deal maker, he leveraged each scandal into political backing against ANC leaders he said were attacking him. He led a revolt against President Thabo Mbeki as party leader in 2007, becoming president himself in 2009 after leading the ANC to a strong electoral victory.

Yet the seriousness of the revelations in Wednesday’s report could mark Mr. Zuma’s toughest challenge. In one section, Deputy Finance Minister Mcebisi Jonas recounts how in the presence of Mr. Zuma, one of the Gupta brothers, Ajay, offered him the post of finance minister—along with 600,000 rand ($44,100)—during a meeting at the family’s compound in Johannesburg.

Ajay Gupta “asked if Mr. Jonas had a bag which he could use to receive and carry R600,000 in cash immediately, which he declined,” the report says, summarizing Mr. Jonas’s statements to the public protector. Messrs. Zuma’s and Jonas’s cellphone records place them at the Gupta’s residence on the day the offer was allegedly made, the report says.

The report cites evidence it says shows Mr. Van Rooyen visited the home of the Guptas on at least seven occasions, including the day before he was appointed. “This looks anomalous given that at the time he was a Member of Parliament based in Cape Town,” the report said.

Mr. Van Rooyen is now cooperative governance minister and along with Mr. Zuma initially sought to prevent the publication of the report. Messrs. Van Rooyen and Zuma have denied any wrongdoing. Mr. Zuma’s lawyer has said the president hadn’t been given sufficient time to respond to the allegations made in the report, nor the opportunity to question witnesses.

“The president will give consideration to the contents of the report in order to ascertain whether it should be a subject of a court challenge,” Mr. Zuma’s office said on Wednesday.

Opposition leaders have said the findings in the report could lead to the impeachment of the president.

“If Zuma will not resign, we look forward to our Motion of No Confidence being debated in Parliament,” said Mmusi Maimane, the leader of the opposition Democratic Alliance.

On the grounds of the city’s St. Albans Cathedral, placard-waving demonstrators attended the first assembly held by Save South Africa—a new group of business, civil society and disaffected ANC officials against government corruption.

In nearby streets, South Africa’s two largest opposition parties—the center-right Democratic Alliance and the leftist Economic Freedom Fighters—held their own protests, calling for Mr. Zuma to respect the constitution and to step down.

Each protest had different visions, but they were unified by one theme: dissatisfaction with Mr. Zuma’s leadership.

“For as long as we have Zuma as president of the country it is not possible to turn the country around,” said Sipho Pityana, a former ANC director-general of foreign affairs and current board member at mining giant AngloGold Ashanti. “At the heart of the problem, we have a leader who is without honor or integrity.”