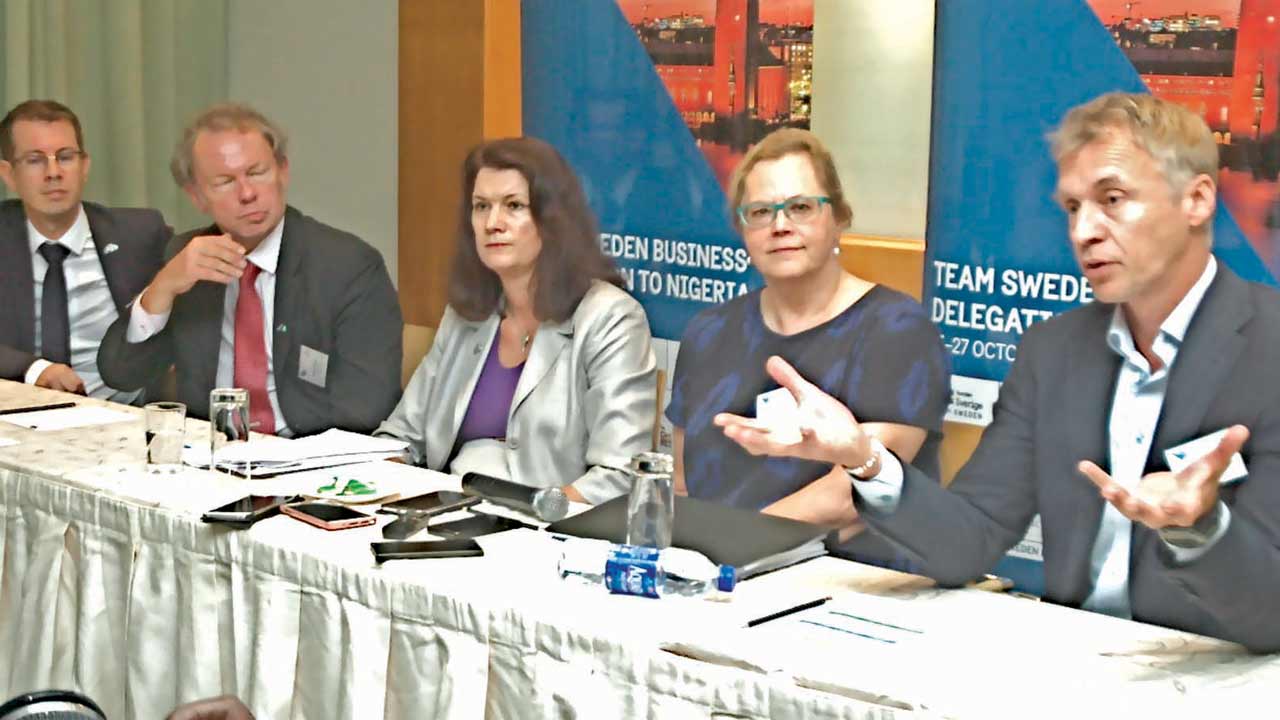 Sweden is seeking opportunities that will increase the trade relations and volumes between it and Nigeria.

Swedish Minister for European Union (EU) Affairs and Trade, Mrs. Ann Linde, who led the Swedish delegation to Nigeria, disclosed this in Lagos on Wednesday, during an interaction with journalists.

Linde said the coming of the Swedish Delegation to Nigeria, was mainly to promote trade between the two countries, stressing that Sweden recognised Nigeria as an investment destination and a big trade country.

According to her, Sweden is the highest ranked country in terms of connectivity, digital economy and e-governance and has a strong tradition in innovation in different sectors of the economy. She said Sweden is conceived as one of the most advanced post-industrialised economies and Swedish companies are perceived as innovative, reliable and good partners.

Speaking about Nigeria, Linde said the country is the largest and fastest growing middle class globally, stressing that there is ongoing effort by the current government to diversify its economy. “During this visit the Swedish experience and how its innovations and ICT technology can enhance productivity in many sectors will be shared.”

She hinted that the Swedish intent to strengthen commercial ties goes beyond single business opportunities and industry sectors, but extends to strategic collaborations with not only private businesses but also public sector and academia.

According to her, there was a need for the two countries to improve their bilateral trade relations so as to be able to engender more cordial relationship.

The Ambassador reiterated that ICT, energy, infrastructure and transport are key areas for the Swedish-Nigerian and European Union, EU cooperation. She stressed that the growing and dynamic nature of the ICT sector in Nigeria offers a promising avenue to expand the two countries commercial ties, with continuously increasing number of mobile and Internet users, which in turn will require further investments in expanded networks and across other sectors.

“Sweden, ranking as the most digitalised economy in the world, with Stockholm as a leading incubator for ICT start-ups, has a lot to offer in terms of expertise and knowledge,” she stated.

According to her, Sweden has a number of strong, world-leading companies in the area of ICT, agriculture, finance, energy, healthcare, infrastructure and transport, many of which already are present in Nigeria, including Ericsson, ABB, Altas Copco, Tetra Pak, Gulf Agency Company, Flexenclosure, Oriflame and Sandvik.

Speaking from Ericsson’s angle, the Managing Director for Nigeria, Johan Jemdahl, disclosed that the firm has been in Nigeria for almost 60 years, saying that the country is the most important market for Ericsson in Africa.

He said Nigeria needs to attract more businesses and that mobile broadband was key in get that done, including mobility.

Jemdahl however, listed insecurity, foreign exchange fluctuations and getting approval and licenses for some major works as some of the challenges currently confronting doing business in Nigeria.

The Ericsson Nigeria MD, called for the building of smart cities in Nigeria, to ensure that Nigeria becomes a digitalised economy in the world with the help of Swedish companies expertise and knowledge.

“When it comes to developing smart cities, you need to have the broadband, network inter-connectivity, cooperating with public institutions and mobile operators, among others,” he said.

China had the highest inflow of Foreign Direct Investments (FDI) globally in 2020, surpassing the US which took the lead in 2019.

Based on data from the National Bureau of Statistics, China reported a 2.3% growth in GDP in 2020. It was the only major economy to record a positive growth rate during the year.

Developed countries saw the worst performance, sinking by a cumulative 69% YoY to $229 billion. For developing economies, there was a 12% decline of $616 billion. By the end of 2020, developing countries accounted for a 72% share of global FDI, the highest on record. India had the highest growth among top-rated economies, shooting up by 13%.

China bore the brunt of the pandemic much better than its peers, posting a 6.5% GDP growth in Q4 2020. During the year, there were 18.02 million new investors in its mainland stock market, raising the total to 177.77 million. Driving the surge in interest was the stellar performance of Chinese stocks in 2020.