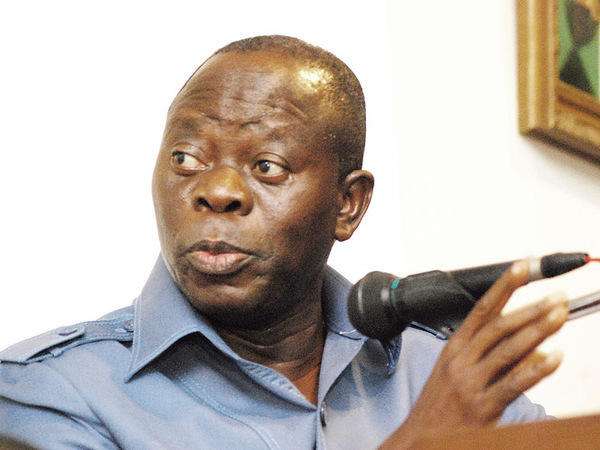 Edo State Governor, Adams Oshiomhole, has raised an alarm that some governors in the South-South have allegedly perfected plans to rig the September 28 governorship election in the state.

Oshiomhole, who spoke when he received the Inspector-General of Police, Mr. Ibrahim Idris, at the Government House on Friday, explained that part of the plan was the importation of about 8,000 militants from some South-South states and that they had been registered in Edo for the poll.

He explained that the militants were imported when they could not find local thugs in the state, adding that he had earlier raised the alarm on the eve of the last Continuous Voters’ Registration exercise.

Oshiomhole explained, “Our opponents who were unable to find local thugs to help them perpetrate violence, which they did between 1999 and 2007, resorted to liaising with my brothers in the sub-region, Delta and Rivers, in particular, to export criminals and militants into Edo State, in order to make peaceful election impossible.

“In line with my tradition, I have always tried to speak out on any matter that I am worried about. I first raised this alarm on the eve of INEC Continuing Voters’ Registration exercise, an exercise that has been designed to register those who have attained the age of 18 between the last registration and the current one.

“But these criminals, who are determined to perpetrate violence and deny us the beauty of a peaceful election, unable to find local participants, chose to import these militants with the support of two or so of my brothers. When I say brothers, I mean brother governors. It does not matter if I disagree with them. They are my brothers.”

But the state chapter of the Peoples Democratic Party described the governor’s allegation as not only false but an indictment on the security agencies.

The state chairman of the PDP, Chief Dan Orbih, in a telephone conversation with our correspondent, said, “It is unfortunate that we have an outgoing governor of the state who has decided to state a lie just to achieve his political purpose. We know very well that what the governor was telling the IG is not true.

On the allegation that the Rivers and Delta governors were having interfering with the electoral process, including the alleged donation of N2bn to the party, Orbih said, “How? Are they part of INEC? He has even gone to the extent of accusing them of contributing N2bn to the election.

“For those who are from Edo State, it is no longer surprising when they see Oshiomhole talk, especially when he lies. He tells lies at will and nobody takes his lies seriously; two billion (naira) is no two million (naira).”

He continued, “He should substantiate whatever allegation he is making with facts and figures. I would like to see a situation where Oshiomhole says somebody contributed N2bn and he brings out a bank statement to prove it.

“Each time I accuse Oshiomhole of stealing money from the state, I bring out vouchers to support my claim. I challenge him to bring evidence to show that anybody contributed even N1m from the two states he is talking about.”