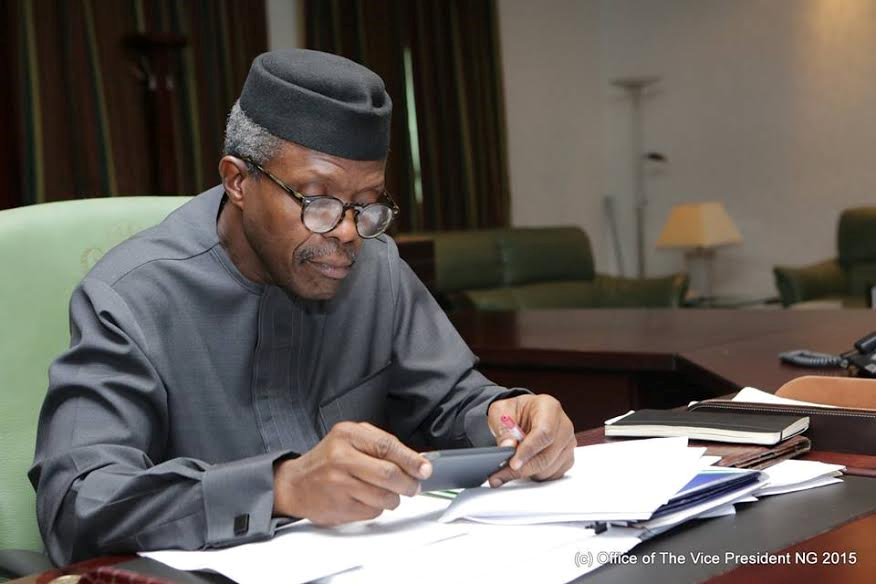 Vice-President Yemi Osinbajo on Tuesday reviewed the state of the economy and explained that the prevailing recession was necessitated by the loss of 60 per cent of the nation’s revenue in the first quarter of the year to the violent activities of militants and economic sabouteurs in the Niger Delta.

But he gave assurances that the recession would be short-lived because the federal government was putting in place some mechanisms that would aid the quick recovery of the economy.

The vice-president, who spoke at a convocation in Ede, Osun State, enjoined Nigerian youths to multitask in order to break even.

Osinbajo’s assurances of a quick return to better days was echoed in China by the Minister of Trade and Industry, Dr. Okechukwu Enelamah, who restated the federal government’s resolve to restructure the economy, saying that its policies focused on diversifying revenue sources would help the economy speed up the recovery process.

Explaining Nigeria’s sharp fall into recession, Osinbajo explained that there was no way the country could have avoided the recession since it had in February lost 60 per cent of its revenues to the activities of saboteurs.

He also identified pipeline vandalism coupled with the errors of some past leaders as some of the reasons for the current economic situation in the country.

The vice-president enjoined youths, especially young graduates to be diligent and take advantage of various international trading platforms to improve their status.

Also speaking at the convocation, a Global economic analyst, Mr Dick Kramer, in a lecture entitled, “Nation Building and Nigeria’s Economic Challenges,” said the country was in recession because it had failed to build a strong private economy over the years and also failed to create an economy based on industries.

While noting that the global economy had been relatively weak in the last 18 years, Kramer said Nigeria needed a new long term economic plan which must entail fostering an effective public/private partnership.

Also a former Minister of Defence, Lt-Gen Theophilus Danjuma (rtd), called for serious investment in the education system in view of its impact on the socio-economic development of the country.

Speaking in China, the Minister of Trade and Industry, Enelamah, said the federal government was taking advantage of the difficult economic conditions arising from the sharp fall in oil prices to restructure the economy.

He said China would continue to be an important partner in Nigeria’s ongoing quest for sustainable growth and development.

The minister spoke during a panel discussion at the Second ‘Investing in Africa’ Forum, which took place in Guangzhou, China, and was organised by the government of China’s Guangdong Province, the China Development Bank, and the World Bank Group.

Enelamah said: “Our principal economic policy direction in Nigeria is to diversify the economy, away from the longstanding traditional reliance on oil exports. We are taking steps to structurally transform the economy, so as to restore growth and create jobs.”

He listed some of the steps the government was taking to include: “Strategically aligning monetary, fiscal and structural policies, to engender much-needed investors’ confidence; creating a private-sector driven Presidential Council on Ease of Doing Business that will initiate and implement far-reaching business environment reforms; repositioning the Nigeria Investment Promotion Council to enable it effectively fulfil its core mandate, among others.”

According to the minister, the NIPC would provide the needed incentives and ‘aftercare’ services to investors, as well as proactively create regular opportunities for investors’ engagement.

The minister highlighted a number of “strategic” sectors for intending and potential investors in Nigeria to include: Agriculture and Agro-Processing, Automotive, Infrastructure (Roads, Rail, Ports and Power), Real Estate, Pharmaceuticals, and the Digital Economy.

In his closing remarks, Enelamah praised the ongoing cooperation between China and Nigeria on the part of both governments, and also the private sector.

Enelamah said: “The China miracle is one that provides very many useful lessons from which Nigeria can borrow, and is borrowing. Nigeria will continue to work hard and in close partnership with China for mutual benefits, growth and development.”