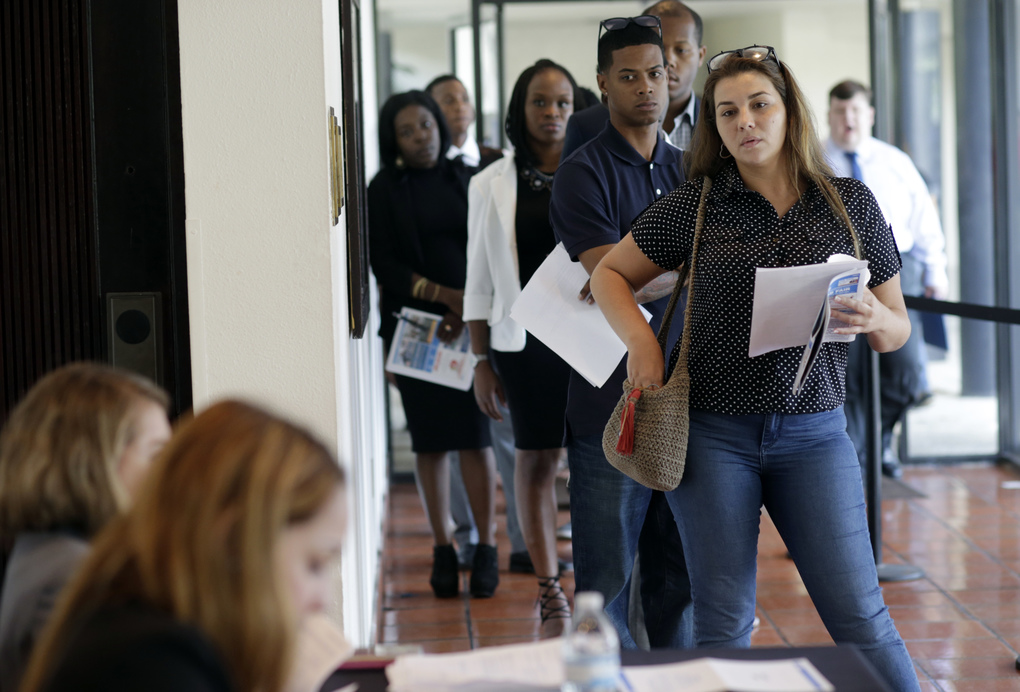 The US labor market added fewer jobs than expected in August, a sign that the job market is slowing down as the economy approaches full employment.

The non-farm payrolls added 151,000 jobs in August, down from 275,000 jobs created in July, the Labor Department report showed on Friday in Washington.

While few others have said it is too early to tell Fed’s next step.

“Overall, it still looks like the job market is doing well,” said Michael Feroli, chief U.S. economist at JPMorgan Securities LLC in New York, who projected a 150,000 gain in payrolls. Even so, “this probably takes a little bit away from the case for a September move,” with the shorter workweek “a bit of a concern,” said Feroli, who projects the Fed will raise rates in December.

Efforts to halt plunging Nigerian Naira are yet to start crystalising despite a series of initiatives implemented to prop up the value of the embattled currency.

The local currency dropped to N444 per US Dollar at the forex spot market on Tuesday before paring losses to close at N415.10.

On Wednesday, the Naira opened at N414.44 against the United States Dollar at the official forex window managed by the FMDQ Group. Investors transacted $200.74 million during the trading hours of Tuesday.

Weak foreign exchange generation despite crude oil trading at $86 per barrel has impeded the Central Bank of Nigeria’s ability to service the economy with enough forex given the structure of the economy as an import-dependent nation.

Lack of forex liquidity has escalated the cost of goods and services in Africa’s largest economy, pushing Nigeria’s inflation rate to 16.63 percent year-on-year in September 2021 and new job creation to a record low.

The unemployment rate rose to 33.33 percent while household savings is presumed to be at an all-time low going by the NDIC.  The Nigeria Deposit Insurance Corporation (NDIC) on Monday said over 99 percent of all the bank accounts in Nigeria have less than the N500,000 Maximum Insured Limit (MIL) of the corporation.

That statement further confirmed Nigeria’s economic challenges. The rising cost of importations and production due to various tariffs imposed on imported goods and the ongoing fight between herders and farmers across the country are some of the factors weighing on Nigeria’s economy and subsequent the nation’s currency, the Naira.

Producers, especially those that depend on imported goods, are now struggling to pass the increase in price to customers who are battling low wages/earnings, rising unemployment, etc.

At Sabo in Mokola, Ibadan, the United States Dollar was exchanged at N563 on Tuesday, even though the Central Bank of Nigeria exchanges it at N411.02 as shown below.

Naira to Dollar exchange rate improved further at the official foreign exchange window on Wednesday despite the ongoing economic uncertainties.

The local currency opened the day at N414.18 to a United States Dollar before closing at N414.07, representing an improvement of 0.16 percent gain.

During the day, Naira plunged to as low as N442 to a United States Dollar at spot fx market. While at the fx future market it was fairly stable at N419. Forex traders exchange $334.97 million on Wednesday.

However, the Central Bank of Nigeria published exchange rates revealed that the United States Dollar was sold at N410.89 on Wednesday to banks. The British Pound and Euro were sold at N565 and N477.74, respectively.

Naira Gained 0.08 Percent to N414.73 Against the United States Dollar on Monday

The Nigerian Naira gained against the United States Dollar on Monday after falling to a record low of N422 per US dollar on Friday at the official forex window.

The local currency opened at N414.46 to a United States Dollar, a 0.15 percent improvement from Friday’s closing price.

Forex scarcity across key foreign exchange segments and the decision of the central bank of Nigeria to halt the sale of forex to Bureau de Change operators continue to impede forex access in Africa’s largest economy.

Vice President Osinbajo had suggested that the apex bank should look to adopt a new forex policy to better close the gap between the black market and official rates. At the unregulated black market, traders are selling at N570 to US dollar.

This, the Vice President said was what was sustaining the black market.

“For context, the Vice President’s point was that currently the Naira exchange rate benefits only those who are able to obtain the dollar at N410, some of who simply turn round and sell to the parallel market at N570. It is stopping this huge arbitrage of over N160 per dollar that the Vice President was talking about. Such a massive difference discourages doing proper business, when selling the dollar can bring in 40% profit!, stated Laolu Akande, Senior Special Assistant to the President on Media & Publicity, Office of the Vice President.