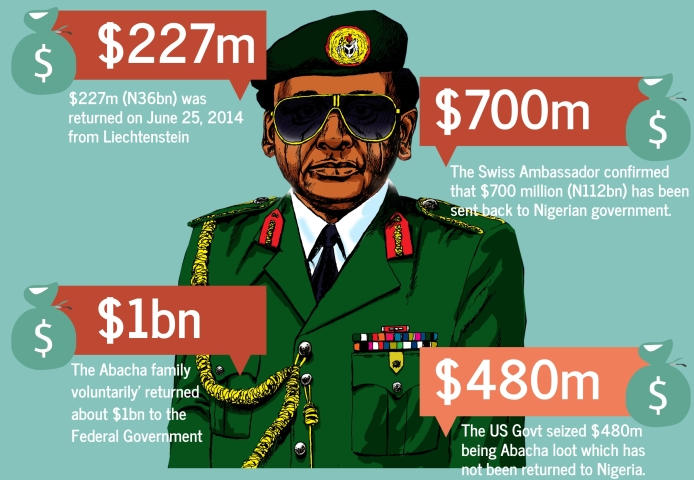 The government of Switzerland has said it would soon return $321 million looted by late head of state, General Sani Abacha and kept in Swiss banks, as part of its commitment to fighting money laundering and other trans-national crimes in that country.

The Swiss Ambassador to Nigeria, Eric Mayoraz, made the disclosure yesterday, dur- ing the signing of a Memorandum of Understanding on Mutual Legal Assistance on criminal matters, between the Swiss government and the Federal Government of Nigeria in Abuja.

The ambassador stated that the MoU was aimed at fostering understanding between the two countries particularly as it relates to their different legal system.

He said: “We are now in the process of repatriating $321m from the second batch of the Abacha loot”, adding that the country had in 2005 repatriated $722m in the first batch.

Mayoraz said: “Today’s event is significant in the sense that it would eradicate every bottleneck associated with the repatriation of stolen funds starched in our country.

“Our countries enjoy excel- lent relations and we cooperate as partners in many fields, on the return of looted assets, migration, human rights, humanitarian assistance and many others.

“Today, we decided to take

this cooperation forward to deepen it in the field of judicial cooperation. By signing a Memorandum of Understand- ing in this important area, our two states further strengthen their ties of friendship and cooperation.”

While stating that fight- ing international crime, in particular corruption, is an important issue also for the Swiss government as the MoU provides for a settle foundation to improve cooperation, the envoy added that it has the advantage of bringing direct contact through central authori- ties as well.

“The text we will now sign marks the starting point of a new era in our common fight against international crime. People, goods and money move around easily in today’s world. That is generally a positive thing. Unfortunately, this mobility is not limited to honest people and clean money. Criminals and proceeds of crime profit from it, as well. States must thus cooperate in order to fight transnational organised crime, corruption, money laundering, the drug trade”, he said.

Minister of State for Foreign Affairs, Hajia Abba Ibrahim, disclosed that the idea of sign- ing the MoU was first muted in 2015. She stated that the agreement would help block accounts of funds linked to money laundering and other trans-national crimes.

She assured the ambas- sador of the commitment of the Buhari’s administration towards the improvement of the living standards of Nigerians, and pledged the nation’s commitment in deepening relations between Nigeria and Switzerland.