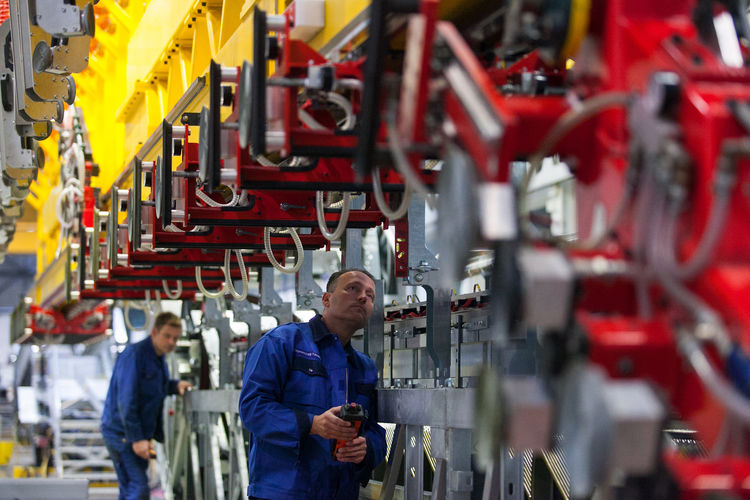 Euro-area economic confidence rose for a second month in May as the European Central Bank prepares to present updated economic projections that could provide further clues about the impact of its stimulus program.

An index of executive and consumer sentiment increased to 104.7 from a revised 104.0 in April, the European Commission in Brussels said on Monday. That’s the highest level in four months and compares to a median estimate for an increase to 104.4 in a Bloomberg News survey of economists.

ECB officials meeting in Vienna on Thursday are expected to keep their ultra-loose policy unchanged again after they expanded quantitative easing by a third to 80 billion euros ($89 billion) in March and cut the deposit rate further below zero. Vice President Vitor Constancio said last week that he’s optimistic the ECB will reach its inflation goal by 2018, reflecting the upgraded stimulus and rising oil prices.

“We expect both the inflation and growth projections to be revised upward; that’s going to be the focus in this week’s meeting,” said Johannes Gareis, an economist at Natixis in Frankfurt. “The ECB will stress the importance of QE now that you can actually see some positive effects in the data.”

Eurostat will say on Tuesday that the inflation rate rose to minus 0.1 percent in May from minus 0.2 percent the previous month, and unemployment was unchanged at 10.2 percent in April, according to separate Bloomberg surveys.

Sentiment among consumers rose to minus 7.0 from minus 9.3 the previous month, according to Monday’s report. Confidence in retailing and construction improved as well, while a measure for industry remained unchanged and a gauge for services declined.

In March, the ECB forecast euro-area growth of 1.4 percent this year, 1.7 percent in 2017 and 1.8 percent in 2018, with inflation of 0.1 percent, 1.3 percent and 1.6 percent, respectively. Asked in a Bloomberg Television interview whether he thinks consumer prices will rise faster in two years than currently predicted, Constancio said he “certainly personally expects” so.