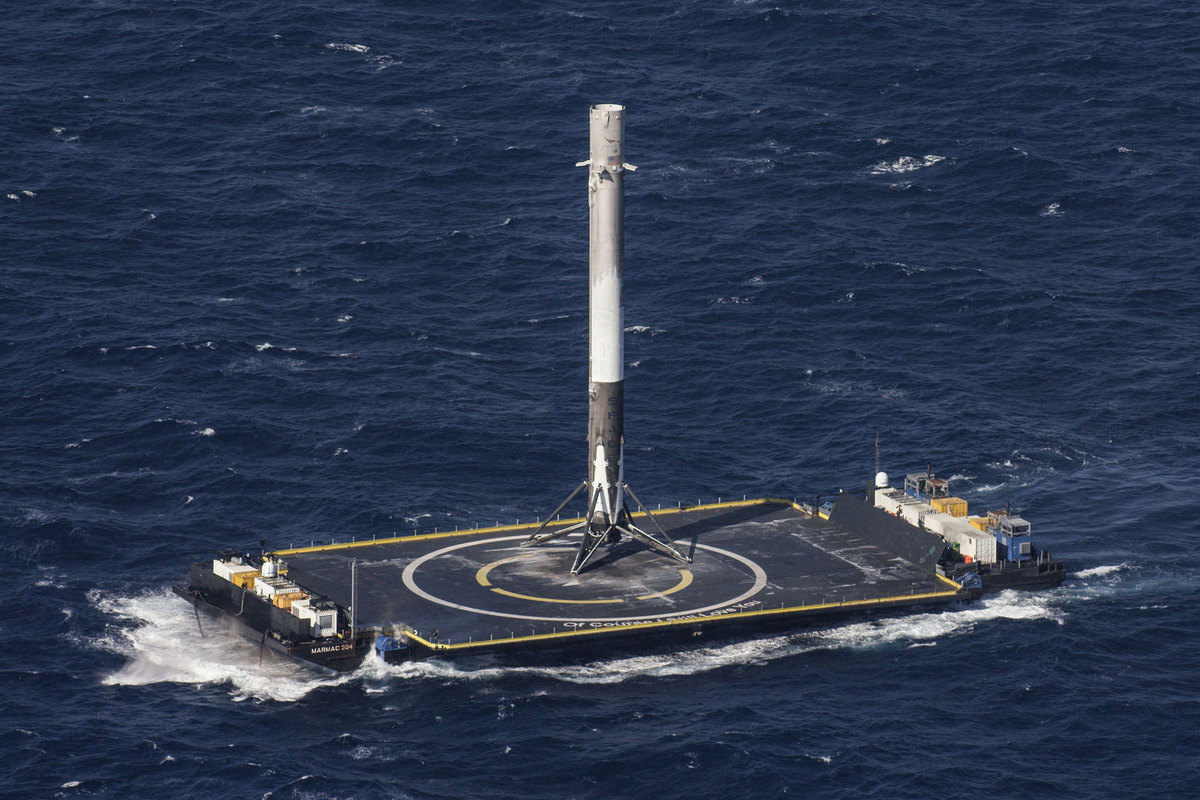 It was a scene straight from a science fiction movie. A white, pencil-shaped rocket angling down through a hazy-blue sky, then gracefully touching down, amid billowing smoke. All on an automated drone-ship in choppy Atlantic seas. In that moment, Elon Musk reached a new milestone in his bid to dominate commercial space and, one day, send humans to Mars.

What a week for Musk. Days after the triumphant unveiling of Tesla’s latest electric car, SpaceX won over the Internet as countless thousands tuned in to watch the Falcon 9 rocket launch and, roughly eight minutes later, its spectacular first-ever landing at sea. At the company’s mission control center in Hawthorne, California, a throng of employees exploded in cheers. President Barack Obama and Apollo astronaut Buzz Aldrin, who walked on the Moon nearly half-a-century ago, were among the first to send shout-outs from around the world.

With his characteristic bravado, Musk soon chimed in: “Tickets to orbital hotels, the moon and Mars will be a lot less than people think,” he wrote on Twitter.

If that sounds over the top, few could deny the symbolic importance of the moment that heralded a new era of affordable, reusable rockets even as it brought back the enthusiasm and drama of the Moon shots and early space shuttle days from a generation ago.

“This is the dramatic visual of the new space age,” said Marco Caceres, senior analyst at consultant Teal Group in Fairfax, Virginia. “NASA has been trying to recreate the excitement of the Apollo era. Elon Musk just did it.”

Long considered a brash upstart nipping at the heels of staid aerospace giants, Space Exploration Technologies Corp. is coming of age 14 years after it was founded by Musk with the lofty– and many have said unrealistic– goal of revolutionizing spacecraft and colonizing Mars. Trips to the Red Planet aside, SpaceX is now within striking distance of becoming dominant in the payload business. It’s planning to fly 18 missions this year, triple the number in 2015.

That’s a highly ambitious goal in an industry known for delays and mishaps. And Friday’s launch– a supply run to the International Space Station — was only the third so far this year. Yet if SpaceX hits its target, it will fling more rockets into space than any of its competitors from the U.S., France, Russia and China and achieve a launch cadence not seen since the end of the Cold War.

The rocket booster that landed on the drone ship Friday will be brought to port and tested on land; if everything checks out, it could fly again as early as June. By the second half of this year, Musk expects SpaceX to launch–and recover–rockets every two to three weeks.

“We’ll be successful, ironically, when it becomes boring,” said Musk at a news conference with NASA Friday. “When it’s like, ‘Oh yeah, another landing, OK, no news there.”’

That will be a bad day for competitors like Europe’s Arianespace, which flies the Ariane 5, and United Launch Alliance, a joint venture of Boeing Co. and Lockheed Martin Corp. They are scrambling to match SpaceX’s lower costs and fast-paced Silicon Valley vibe. Reusable rockets, once scoffed at by the established players as a pipe-dream, are now on the top of everyone’s agenda.

The cost of a Falcon 9 launch is $61.2 million, according to the company’s website. Established launch companies won’t be able to match SpaceX’s launch costs for years. The price tag for launching a ULA Atlas V rocket, which is not reusable, was $184 million two years ago. ULA has succeeded in getting that price down so far by a third, but it won’t fall below $100 million until 2019 at the earliest.

The National Aeronautics and Space Administration, which ended its 30-year space shuttle program in 2011, now partners with private industry to fly both cargo and crew. SpaceX’s Dragon capsule, loaded with 7,000 pounds of cargo, supplies and an inflatable extension module, reached the space station orbiting over Algeria on Sunday morning, New York time. Dragon is scheduled to return to Earth and splashdown in the Pacific Ocean May 11.

Government agencies like NASA are just one of three markets for launch providers like SpaceX. Satellite companies depend on rockets to get their communications equipment into orbit. And the $70 billion national defense market, which includes highly sensitive missions for the military, is another. SpaceX has bid on a contract to launch GPS satellites for the U.S. Air Force.

SpaceX also has an advantage by playing outside the old aerospace procurement system which relies on multiple contractors and subcontractors. Legacy aerospace companies have long supply chains with embedded testing, documentation and procurement procedures that inflate costs. SpaceX builds not only the Falcon 9 rocket but the rocket’s Merlin engines in-house. The tight loop between design, manufacturing, and prototype testing is a Silicon Valley approach, said consulting firm Alix Partners in a recent report.

“The fact that SpaceX makes its engines itself is a really big deal,” said David Wireman, an aerospace analyst with Alix Partners. “The engines are a big chunk of the cost of any rocket. SpaceX has broken the supply chain.”

At industry conferences largely populated by middle-aged men in gray suits, you can spot the SpaceX employees, in part, by the logos on their jackets and by their youthful look. SpaceX has roughly 5,000 employees; their average engineer is 32.

SES of Luxembourg first flew with SpaceX in 2013 and has contracted for another four launches through 2017. Like other satellite customers, SES was drawn to SpaceX’s vision, lower cost and fast-paced culture.

“The fundamental difference that SpaceX has is that they are on a mission, and the mission is to go to Mars,” said Martin Halliwell, SES’s chief technical officer, in an interview. “That is absolutely unique within the industry. It’s a true passion felt by Elon and every single person in the company.”