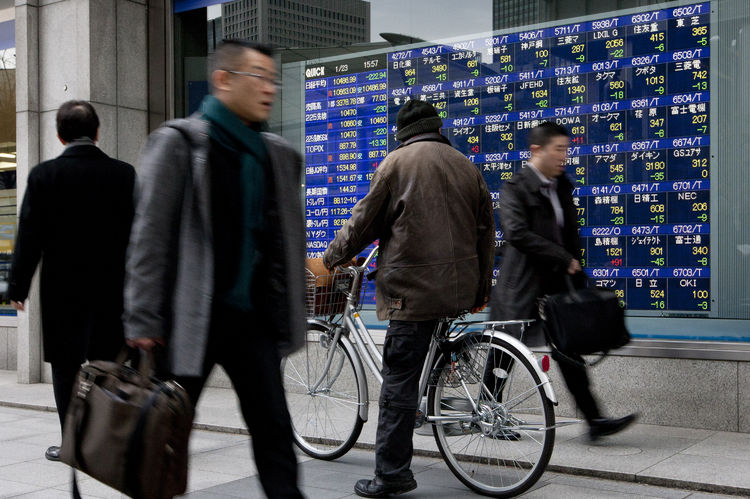 “Iran and Saudi Arabia are showing little desire to lower production, so despite the agreement by the main countries to freeze output, it’s clear that alone won’t push oil prices back up to $50 or $60 a barrel,” Chihiro Ohta, general manager of investment information at SMBC Nikko Securities Inc. in Tokyo, said by phone. “There are no catalysts to purchase stocks now. We’re not seeing buying ahead of the G20 either.”

The yen gained for a second day, trading at 111.98 per dollar after jumping 0.7 percent on Tuesday. That sent exporters lower, including Toyota Motor Corp. which declined 1.6 percent. Subaru manufacturer Fuji Heavy Industries Ltd. lost 3.4 percent, while TDK Corp., the Apple Inc. supplier that gets more than 90 percent of revenue abroad, fell 4.1 percent.

Honda Motor Co. led car manufacturers lower after shaking up management, including the exit of its chairman. The changes at Japan’s second-largest automaker come amid internal quality woes and an air-bag safety crisis with its top supplier Takata Corp. Shares of Honda fell 3.3 percent.

E-mini futures on the Standard & Poor’s 500 Index slipped 0.1 percent after the underlying equity gauge tumbled 1.3 percent on Tuesday, the most since Feb. 8. The recent rally’s strongest performers lost momentum, with banks and tech shares declining. Economic data was mixed, as a report showed previously owned home sales unexpectedly rose in January to the second-highest pace since early 2007, while February’s consumer confidence decreased.

Investors awaited the start of a Group of 20 meeting on Friday in Shanghai. The weakening global-growth outlook was expected to dominate the agenda as officials from the world’s biggest economies gathered.

Here is the daily dollar to Naira exchange rates at both the official and black markets today, January 24, 2022.

How Much is Dollar to Naira Exchange Rate Today, January 24, 2022, at the Official Market?

However, FMDQ Group forex data puts the dollar to naira exchange rate at ₦416 to $1 on Friday, 21st January 2022. The Investors and Exporters forex platform is yet to be updated today.

How Much is Black Market Exchange Rate for Dollar to Naira Today?

The dollar to naira exchange rate at the unregulated forex market popularly known as the black market is N560 for buyers and sells at N565 today, Monday, January 24, 2022, according to sources cited by Bureau De Change (BDC).

The Central Bank of Nigeria has warned against patronising the black market and directed all Nigerians to visit their banks for their forex needs.

How Much is Bitcoin to Naira Today?

The entire cryptocurrency plunged in December 2021 after the US Federal Reserve announced plans to adjust its monetary policy to accommodate the change in the nation’s economic realities. Experts are predicting that an increase in interest rate will impact the crypto space as capital inflow is projected to drop.

Meanwhile, the minister of finance Mrs Zainab Ahmed on Monday said the federal government has suspended plans to remove fuel subsidy in 2022 given the nation’s inflation rate.

Speaking at National Assembly, she said  “We discovered that practically, there is still heightened inflation and that the removal of subsidy would further worsen the situation and impose more difficulties on the citizenry,” Ahmed said at the meeting.

“One of these include the roll-out of the refining capacities of the existing refineries and the new ones which would reduce the amount of products that would be imported into the country.”

Naira Slides Marginally Against US Dollar, Exchanges at N415

The Nigerian Naira fell slightly against the United States Dollar on Monday, according to the last update from the Central Bank of Nigeria.

It should be recalled that the Naira plunged to N435 against the United States on Friday 31, December 2021 when the Central Bank of Nigeria (CBN) adjusted its exchange rate by N2 to accommodate the change in Nigeria’s economic realities.

The Naira has now improved by about 4.6 percent against the United States Dollar from the year to date. The improvement was after the market digested and interpreted the CBN action as the usual forex devaluation in line with the apex bank policy.

At the unregulated black market, traders in Abuja sold the greenback at N570 a unit and buy it at N569. CBN had attributed Nigeria’s forex challenges to the activities of black market operators and warned Nigerians to stop patronising that section of forex.

Meanwhile, the crypto space remained bearish across the board ahead of US Federal Reserve rate decisions. Bitcoin to Naira exchange rate declined by 2.5 percent to N17.346 million in the last 24 hours while Eth shed 3.6 percent.

Other cryptocurrencies suffer the same fate as Binance coin, Tether, Cardano and XRP depreciated by 3.70 percent, 0.31 percent, 1.72 percent and 2.93 percent.

Bitcoin looks vulnerable above the $41,000 support level, largely due to the drop in capital inflow into the crypto space ahead of a possible interest rate increase in the world’s largest economy, the United States.

“Bitcoin continues to look vulnerable having failed to bounce back strongly off the recent lows. It appeared to be gathering some upside momentum at times last week but it quickly ran into resistance just shy of $45,000 where it had previously seen support. All eyes are now on $40,000 and whether we’re going to see another run at that major support level,” said Craig Erlam, Senior Market Analyst, UK & EMEA, OANDA, in an email to Investors King.