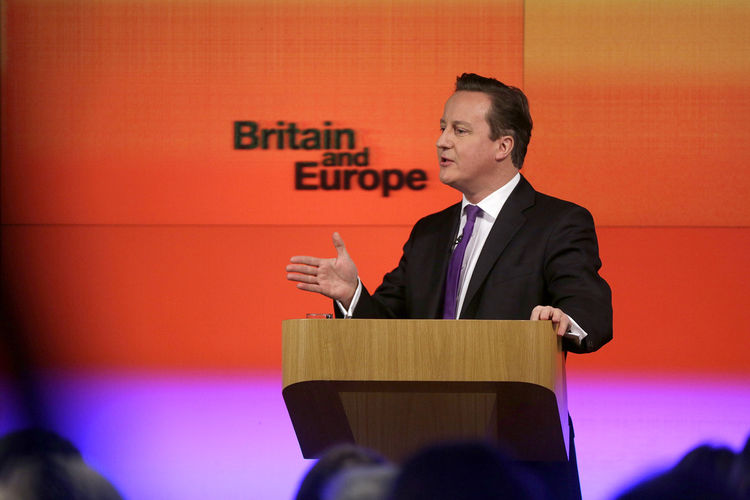 Prime Minister David Cameron said he’ll hold a long-pledged referendum on the U.K.’s membership of the European Union on June 23, signaling the start of a four-month campaign that immediately exposed rifts in his Conservative Party.

“Leaving Europe would threaten our economic and our national security,” Cameron said outside his official Downing Street residence in London Saturday. “The choice is in your hands, but my recommendation is clear. I believe that Britain will be safer, stronger, and better off in a reformed European Union.”

Cameron’s announcement, made after what the BBC described as the first cabinet meeting held on a Saturday since the Falklands War in 1982, follows intense negotiations in Brussels over the past two days to finalize a deal with EU leaders resetting Britain’s relationship with the 28-nation bloc. Now, attention turns to the stance of ministers who have been given a free hand by Cameron to campaign against the government’s position. They were asked not to announce their intentions until after the cabinet meeting.

Divisions among the Tories were immediately in evidence when several ministers were pictured at a rally by Vote Leave, one of several groups campaigning for an exit from the EU. They included Justice Secretary Michael Gove, Work and Pensions Secretary Iain Duncan Smith, Chris Grayling, the leader of the House of Commons, Northern Ireland Secretary Theresa Villiers, Culture Secretary John Whittingdale and Employment Minister Priti Patel. Late Friday, several rank-and-file Tory lawmakers addressed a rally by Grassroots Out, another group campaigning for an exit.

The vote, on the same day as an EU summit, will revisit the question of the U.K.’s membership of the EU that was last put to voters in 1975, two years after Britain joined the bloc, then known as the European Economic Community. The bookmaker Ladbrokes on Saturday put the odds of Britons voting to remain at 69 percent.

“There will be many passionate arguments over the months ahead and individual cabinet ministers will have the freedom to campaign in a personal capacity as they wish,” Cameron said. In January, he told lawmakers he was dispensing with traditional cabinet guidelines of “collective responsibility,” saying ministers would not be disciplined for opposing the official line on the referendum.

The prime minister was given a fillip on Saturday when Business Secretary Sajid Javid and Home Secretary Theresa May, both seen as wavering over which way to vote, threw their support behind the campaign to remain.

Javid’s stance was reported earlier by The Spectator magazine and confirmed by his office after the cabinet meeting, while May, who’s expressed Euro-skeptic views in the past, said in a statement she’ll support the government position.

“For reasons of security, protection against crime and terrorism, trade with Europe, and access to markets around the world, it is in the national interest to remain a member of the European Union,” she said.

Earlier, Chancellor of the Exchequer George Osborne, who’s helped spearhead the U.K.-EU discussions, told the BBC the U.K. will be “safer” staying in the European Union.

“The alternative is a huge leap in the dark, with the risks that that entails for our country, for its economy and for our security,” he said.

The views of London Mayor Boris Johnson will be the most closely watched, after an Ipsos Mori poll on Feb. 17 found he’s second to only Cameron when it comes to influencing whether voters choose to stay or go.

Unlike the “bitterly divided” Tories, the opposition Labour Party is largely united on the issue of Europe, its foreign affairs spokesman, Hilary Benn, said Saturday in a BBC radio interview. “The vast majority of Labour MPs, the Labour movement, the Labour Party conference, the trade union movement supports our continued membership.”

Labour Party leader Jeremy Corbyn, who’s held ambiguous views on the issue in the past, also threw his weight behind the campaign to stay.

“We will be campaigning to keep Britain in Europe in the coming referendum, regardless of David Cameron’s tinkering, because it brings investment, jobs and protection for British workers and consumers,” Corbyn said Saturday in an e-mailed statement.

The U.K. won a seven-year “emergency-brake” period in which it can impose welfare curbs on other EU citizens arriving to work in Britain, as well as provisions for its financial services industry and agreement that the EU goal of “ever closer union” doesn’t apply to Britain.

Cameron “only ever asked for minor changes,” Vote Leave Chief Executive Officer Matthew Elliott said in a statement.“He will now declare victory but it is an entirely hollow one.”

“The great thing about the campaign is it’s absolutely cross-party, cross-union,” Bone said in an interview. There are people “from across all the political spectrum — and most of them, I don’t agree with on anything. But on this one issue we’re all coming together.”

It wasn’t all unity at the rally, which gathered more than 1,000 people a stone’s throw from the Houses of Parliament. More than 100 people walked out when guest speaker and Respect Party leader George Galloway was brought on at the end, some of them calling him an anti-Semite, because of his views on the Israeli-Palestinian conflict.

“There is an exit door, and I suggest we take it,” Farage said in a reference to the EU, rather than Galloway.