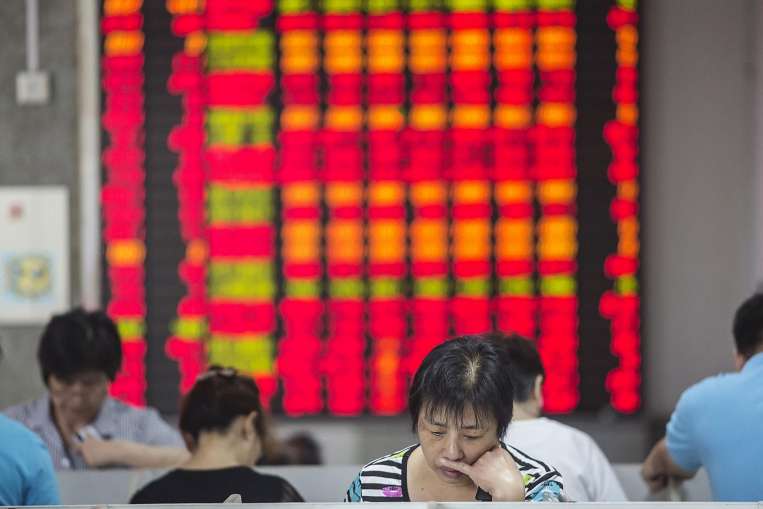 U.S. stocks fell, as commodities from copper to gold advanced amid a slide in the dollar that was fueled by speculation global growth may not be strong enough to warrant further central-bank tightening. Crude erased an advance to fall back below $32 a barrel.

The dollar’s retreat was sparked by data showing the U.S. services sector grew at the slowest pace in nearly two years, underscoring the vulnerability of the American economy to unsteadiness abroad. The report tipped the fixed-income market’s balance closer toward zero rate hikes by the Federal Reserve this year, amid prospects central banks from Asia to Europe will act to quell the turmoil that’s roiled markets in 2016. The greenback’s drop helped prop up the price of gold and industrial metals.

“The lower the dollar, the better it is for commodities, so we are seeing a little bounce back,” Andrew Brenner, head of international fixed income at National Alliance Capital Markets in New York said by phone. “The number of Fed rate raises has continued to be reduced by the market place, probably a little bit too much. But yes the Fed will cut back, we will not do four interest rates raises this year.”

Economic data did little to alter perceptions on the strength of the world’s largest economy. Initial jobless claims last week rose more than expected, Labor Department data showed, while factory orders declined at a faster pace in December than the previous month.

“The question is what can we hang our hat on right now? It’s not earnings, it’s not what central banks are able to do, and it’s certainly not what we’re seeing with economic data,” Yousef Abbasi, global market strategist at JonesTrading Institutional Services LLC in New York, said by phone. “Central banks continue to take their targets down on growth and inflation and part of today’s frustration came with the whippiness of crude.”

The Stoxx Europe 600 Index fell 0.2 percent, after rising as much as 1.1 percent. Daimler AG led automakers to among the biggest declines out of the 19 industry groups. Gauges of energy shares and commodity producers jumped more than 3.3 percent, for the best performances.

Credit Suisse Group AG slumped 11 percent to its lowest price since August 1992 after posting a quarterly loss as it wrote off goodwill and set aside provisions for litigation, while its two investment-banking divisions slumped.

The MSCI Emerging Markets Index rose 2.6 percent, with more than five stocks advancing for every one that declined. Material and energy producers led gains among 10 industry groups, climbing almost 5 percent.

Russia’s Micex Index jumped 2.4 percent, the most in a week, and shares in Dubai rallied 2.8 percent. Equity benchmarks in South Korea, Malaysia, the Philippines and South Africa rose at least 0.8 percent.

The Bloomberg Dollar Spot Index, a gauge of the greenback against 10 major peers, retreated 0.6 percent after sliding as much as 1.9 percent last session.

The greenback fell against all of its 16 major peers except Mexico’s peso and the British pound, which was weighed down by the Bank of England ’s unanimous vote to keep interest rates unchanged. Officials signaled borrowing costs will stay low as they cut their growth and inflation forecasts.

The dollar slipped 1 percent to 116.67 yen, after erasing all its gains since the BOJ’s surprise Jan. 29 move. The greenback weakened 1 percent to $1.1214 per euro, and has now fallen every day this week.

The Bloomberg Commodity Index, which measures returns on raw materials, fell 0.2 percent after earlier rallying as much as 1.2 percent. The gauge advanced 1.9 percent yesterday.

Oil sank after rallying earlier. West Texas Intermediate fell 1.9 percent to $31.67 a barrel in New York, after jumping as much as 4.1 percent. Some OPEC member states and non-members have been talking about an extraordinary meeting on production.

Statoil ASA, Norway’s biggest oil company, deepened investment cuts and offered to pay dividends in stock. Royal Dutch Shell Plc said it depleted its oil and gas reserves much faster than it replenished them with new resources in 2015, its worst performance since 12 years ago.

Industrial metals benefited from a drop in the U.S. currency that makes dollar-denominated commodities cheaper for investors. Aluminum for delivery in three months climbed to the highest this year on the LME, and lead advanced for the eighth day in a row, the longest run since June 2014.

Spot gold climbed for a fifth day, the longest run of gains in five months, as expectations of continued low U.S. interest rates seeped through the market.

Spanish and Italian government bonds led declines across the euro region as investors questioned the level of additional stimulus they can expect from the European Central Bank.