The planned passage of the 2018 budget today (Tuesday) by the National Assembly is no longer feasible.

Investigations on Monday, indicated that the N8.612tn budget would not likely be passed this week because of what the lawmakers termed “the enormous volume of work” before committees and particularly, the anchor Committee on Appropriation.

“Tuesday is out of it. This week entirely is out of it. A realistic projection will be next week. By implication, you are looking at any day from Tuesday to Thursday next week. Of course, that will mean May as well,” a senior parliamentary official told our correspondent on Monday in Abuja.

Findings showed that the long delay caused by the row between the Executive and the National Assembly over the budget had also affected the reporting speed of most standing committees to the Committee on Appropriation.

“As of last week, some sub-committees were still sending their reports to the Committee on Appropriation. That will mean more work and more time for the committee to reconcile the reports and produce the final document for consideration by the House,” another source stated.

The Deputy Chairman, House of Representatives Committee on Appropriation, Mr. Chris Azubuogu, confirmed that the National Assembly would take more days to pass the budget.

Asked to score the level of work done on the budget, Azubuogu simply replied, “We have reached an advanced stage.”

When asked to put a specific date for the passage of the Appropriation Bill, he declined.

Azubuogu stated, “We are on it but I don’t think that it will be tomorrow (today).

“There are over 7,000 pages of work before us. So, you can appreciate what I am saying. In a number of days, yes, but not Tuesday.”

Namdas claimed not to have information on likely changes to the budget from the original document submitted to the legislature by President Muhammadu Buhari on November 7, 2017.

He stated, “It is the official report by the Committee on Appropriation that I can speak on. This is not done by guess work.

“So, I will advise that we wait for the committee to lay a report formally before the House so that we can talk from an informed position.”

However, our correspondent gathered that the National Assembly might alter the crude oil benchmark for the budget.

Buhari had proposed a benchmark price of $45 for a barrel of crude oil, up from the $44 passed for the 2017 budget.

Investigations indicated that the driving force for the possible jack up of the benchmark price was the rise in the global price of crude.

The media reported that lawmakers were considering a new benchmark of between $47 and $52 per barrel.

One source said, “In November 2017 when the President brought the budget, the price of crude was between $50 and above. Today, it is nearing $75, which is a good development for our budget.

“It then means that with additional funds coming in, the huge deficit of N2.005tn can also be addressed.”

The budget proposal is for a total of N8.612tn, up from N7.44tn appropriated in 2017 by N1.17tn. But it is unclear what the final figure that the National Assembly will pass will be.

Some of the proposals from the President are recurrent cost, N3.494tn; capital expenditure, N2.652tn; debt servicing, N2.014tn; and statutory transfers, N456bn. 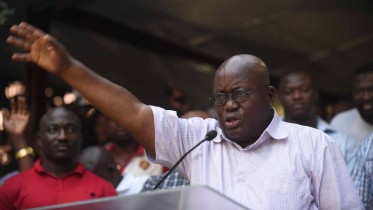