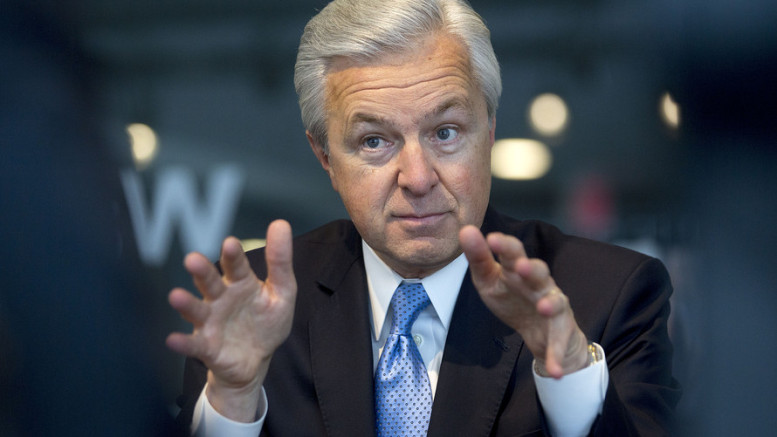 John Stumpf, who led Wells Fargo & Co. through the financial crisis and built it into the world’s most valuable bank, stepped down as chief executive officer and chairman, bowing to public outcry over legions of accounts opened by his employees for customers who didn’t request them.

Stumpf, 63, is retiring from both posts effective immediately, the bank said Wednesday in a statement. Tim Sloan, 56, the chief operating officer long viewed as his most likely successor, will become CEO. Lead director Stephen Sanger will become the board’s non-executive chairman. Elizabeth Duke, a former Federal Reserve Board governor, will be vice chair.

“This was John Stumpf deciding that the best thing for Wells Fargo to move forward was for him to retire — even though that was a very difficult decision,” Sloan said in an interview. “He wasn’t fired” or even “gently pushed” by the board.

Stumpf leaves Wells Fargo and its 268,000 employees with a damaged reputation. It has refunded $2.6 million to affected customers and has said it’s ending sales incentives that have been blamed for the abuses. The stock fell as much as 12 percent after the misdeeds became public, and its subsequent rebound hasn’t been enough for Wells Fargo to retake the top spot in market value among U.S. banks, which it relinquished to JPMorgan Chase & Co.

Wells Fargo shares climbed 1.8 percent to $46.13 in extended trading at 7:28 p.m. in New York, after the San Francisco-based company announced Stumpf’s exit. The stock had slumped 17 percent this year through the close of regular trading, the worst performance in the 24-company KBW Bank Index.

“It’s great news” for investors because it may help quell the public’s frustrations, said Tony Scherrer, director of research at Smead Capital Management, which oversees more than $2 billion including shares of Wells Fargo. “There’s no better and more reasonable fall guy out there than John Stumpf.”

Stumpf told directors Monday that he wanted to leave, and the board received his written resignation Wednesday morning, according to a person with knowledge of the matter. The exit was approved that day, Sloan said. He declined to comment on the board’s investigation of senior executives and other managers over the misconduct. The company said Stumpf wasn’t available for interviews.

It’s an ignominious end to a nine-year tenure as CEO that saw Wells Fargo grow to become the biggest U.S. home lender with returns that were the envy of other bank executives. The profits were driven in part by cross-selling — offering credit cards to customers who opened checking accounts, for example — the strategy that’s at the center of the scandal that brought Stumpf down.

His unraveling began Sept. 8, when the U.S. Consumer Financial Protection Bureau announced that Wells Fargo had agreed to pay $185 million to settle allegations it secretly opened the unauthorized accounts. Multimillion-dollar settlements have become almost routine in the banking industry, but the brazenness and breadth of the misconduct struck a nerve.

The U.S. Senate called a hearing, and two weeks later Stumpf traveled to Washington for a three-hour grilling. “I am deeply sorry that we’ve failed to fulfill on our responsibility to our customers, to our team members and to the American public,” Stumpf told the Senate Banking Committee. “I’ve been through many challenges at Wells Fargo, but none of which pains me more.”

“You should resign,” the Massachusetts Democrat told Stumpf. “You should be criminally investigated by both the Department of Justice and the Securities and Exchange Commission.”

A week after the hearing, Stumpf agreed to forgo $41 million in unvested stock that had been granted for performance, as well as some of his salary.

That wasn’t enough for Congress. At a second hearing on Sept. 29, called by the House Financial Services Committee, Stumpf denied there was any organized effort to open sham accounts. Lawmakers suggested the bank should be broken up and called for his arrest.

Wells Fargo “is a criminal enterprise,” said Gregory Meeks, a New York Democrat. “Would you allow someone to walk out after robbing your bank?”

Sloan’s ascent may not appease such outcry. He’s close to Stumpf, serving on the operating committee and holding several of the company’s most senior posts. He was chief financial officer for three years until 2014, when he took over the bank’s Wall Street operations. He became president and chief operating officer last November, overseeing key divisions that include the retail arm, where abuses occurred.

“I remain concerned that incoming CEO Tim Sloan is also culpable in the recent scandal, serving in a central role in the chain of command that ought to have stopped this misconduct,” U.S. Representative Maxine Waters, a California Democrat, said in a statement.

Yet Sloan is highly regarded internally and, importantly, didn’t work within the tainted branch network during the misconduct, said Marty Mosby, an analyst at Vining Sparks.

“His background has been the wholesale bank and not the consumer bank,” Mosby said. So the appointment “is kind of a fresh slate.”

The bank has said it fired 5,300 employees over the fake accounts. Some low-level employees came forward, saying they were under intense pressure to meet sales quotas. They said managers told them to do whatever it took to open new accounts, even if customers didn’t ask for them.

At Warren’s insistence, the Department of Labor agreed on Sept. 26 to conduct a review of whether the bank violated wage and overtime rules while pushing branch workers to meet aggressive targets. U.S. prosecutors are also investigating, according to a person with knowledge of the matter.

“What you saw from the two hearings was that he came across as really out of touch, not just with what was going on in the bank, but also with the current political environment,” said Brian Kleinhanzl, an analyst at Keefe, Bruyette & Woods in New York. “It was a certain aloofness that he presented, which is not what you wanted to see in that situation. Overall, he completely misread the situation.”

Stumpf, one of 11 children of a dairy farmer from Pierz, Minnesota, about 100 miles (160 kilometers) north of Minneapolis, joined the loan department of Norwest Corp. in 1982 and rose through the ranks. In 1998, Norwest merged with Wells Fargo and Stumpf was put in charge of Arizona, New Mexico and Texas. He was appointed president in 2005.

When Stumpf assumed the top job in June 2007, the U.S. housing bubble was about to pop. A year later, amid the ensuing financial crisis, he outmaneuvered Citigroup Inc. to purchase Wachovia Corp. American Banker chose Stumpf as its 2013 Banker of the Year, and Morningstar Inc. named him its CEO of the Year for 2015. Aside from settlements with cities such as Baltimore and Memphis for predatory mortgage lending in which it neither admitted nor denied wrongdoing, Wells Fargo generally avoided controversies that ensnared some of its competitors.

While Stumpf lacks the presentation skills of some other CEOs, he deserves credit for managing the integration of Wachovia, said Gary Townsend, founder of family office GBT Capital Management in Chevy Chase, Maryland.

Other Wall Street CEOs have survived more costly misdeeds. Lloyd Blankfein of Goldman Sachs Group Inc. was excoriated at a 10-hour Senate hearing in 2010 over the bank’s aggressive marketing of mortgage investments and paid a then-record $550 million fine. JPMorgan’s Jamie Dimon faced a congressional committee’s displeasure over the London Whale trading debacle, which ended up costing more than $1 billion in fines. Even J.P. Morgan Jr. was dragged before Congress in 1933 to take blame for the Great Depression. None lost his jobs.

“There is not a single American with a bank account who hasn’t had complications, errant fees or frustration,” said Isaac Boltansky, an analyst at Compass Point Research & Trading LLC in Washington. “That’s what makes this account scandal so insidious and relatable.”

Wells Fargo has paid Stumpf more than $250 million since 2000, when the bank first began disclosing his compensation. That figure includes $23 million in salary, $44 million in cash bonuses, and $190 million from the vesting of stock and exercising of stock options.

He owns $100 million of the bank’s shares, plus stock options that would be worth $41 million if exercised at Wednesday’s closing price. He’s eligible for $24 million from his retirement plans if they were paid out in a lump sum.

He should “return every nickel he made while this scam was going on,” Warren said in an e-mailed statement Wednesday. “If Mr. Stumpf is leaving with all of his ill-gotten millions that’s still not real accountability.”

As CEO, Stumpf cultivated a folksy persona, regaling interviewers with descriptions of his hardscrabble upbringing. He pushed cross-selling, using slogans including “Eight is Great” to encourage bankers to sell eight different products to each customer.

Ironically, the fake accounts weren’t profitable for Wells Fargo, according to Mike Mayo, an analyst at CLSA Ltd. in New York.

Stumpf was two years away from Wells Fargo’s mandatory retirement age of 65. Some analysts said they weren’t surprised by his decision to leave early.

“As this issue snowballed, it began to look like the most likely outcome,” said R. Scott Siefers at Sandler O’Neill & Partners. “You had high-profile politicians calling for his resignation. There was a lot of vitriol directed at them publicly. So this should help to stanch some of that bleeding.”

CBN Predicts Boost in Credit with Moveable Collateral The Governor of the Central Bank of Nigeria (CBN), Mr. Godwin Emefiele, yesterday stated that given that…

Refineries Perform Below 20% as Losses Persist