Governor Godwin Obaseki of Edo State has said that fruitful negotiations are ongoing to attract Vlisco, one of Africa’s largest textile companies to set up at the Benin Industrial Park, as the state plans to reposition as a textile hub in the country.

Obaseki stated this when he received executive members of the National Union of Textile, Garment and Tailoring Workers of Nigeria, Edo State chapter, led by its chairman, Mr Isaiah Okungbowa.

The BIP is an industrial complex being developed by the Obaseki-led administration and aimed at stimulating large scale industrialisation and creating wealth for Edo people and residents, according to a statement from the Edo State Government.

It added that the park, which is expected to cover 996 hectares of land, would host textile, agro-processing, equipment manufacturing and other industries.

The governor said his administration was focused in building the manufacturing hub in a secure environment with stable electricity supply, water and other basic amenities to enhance the ease of doing business and allow for mass production.

He noted that the state was keen on becoming a textile hub, saying, “We want to develop the state and create wealth for Edo people by increasing economic activity in the state. We want to ensure our state is developed and promote as an environment that attracts investors.

The leader of the delegation, Comrade Isaiah Okungbowa thanked the governor for his continued support for them, stressing that they will continue to play their role in supporting the administration.

He commended the governor for his drive to create 200,000 jobs for the people of the state and expressed the readiness of the union to partner his administration.

He appealed for the establishment of a cottage fashion industry, which could be managed by the union.

Stock Market Reopens Bearish, Down by 0.02%

Be the first to comment on "Vlisco, Obaseki Discuss Benin Industrial Park Factory" 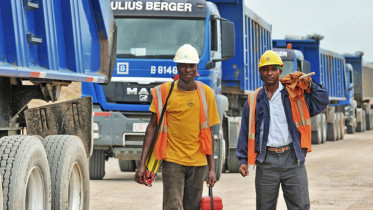 Julius Berger Posts 142.4% Profit For 2018 Julius Berger Nigeria Plc more than doubled its profit in 2018, according to the report released during the…