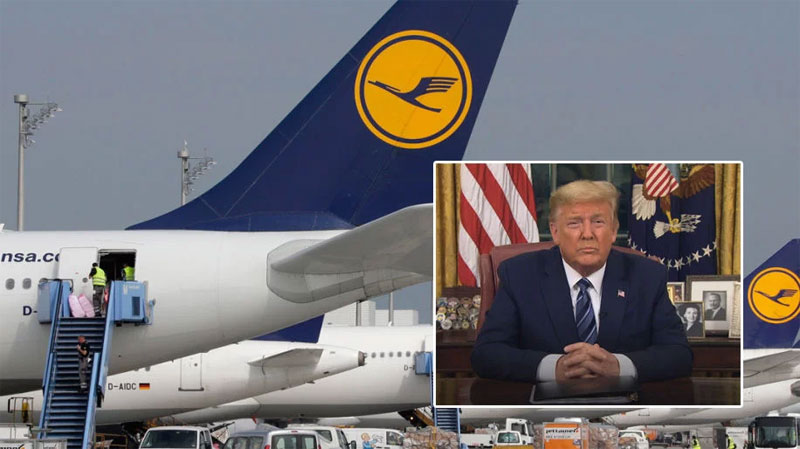 President Trump on Wednesday announced a 30-day ban on flights from European nations, except the United Kingdom and Ireland.

The President, who had said Americans have very low chances of been infected, changed his tune on Wednesday after the total number of infected Americans rose over 1,200 with at least 37 deaths.

According to several reports, global cases rose more than 126,000 this week with over 5,000 deaths. Businesses and new investments are going to be affected by the new travel ban as business people can no longer visit the world’s two largest economies, the US and China.

Global business confidence would nosedive while growth is expected to contract to a record low despite measures by central banks to contain the situation. The impact of the fast-spreading coronavirus continues to grow with more countries from Africa to Oceania recording their very first case.

The European Stoxx 600 index plunged by 10 percent on Thursday morning while shares of European airlines declined by 20 percent. The uncertainty is expected to weigh on new job creation, profitability and new investments in the aviation sector in 2020.

According to U.S data, the travel and tourism market between the United States and Europe (including the U.K and Ireland) was estimated at $130 billion per year. A huge amount that would hurt both regions if they failed to develop an effective solution for the virus.

Consumers have sustained the American economy up until now, however, analysts says consumer spending “has effectively held up the economy in what has been a manufacturing recession. Anything that jeopardizes that will be problematic,” said Shaun Roache, chief economist at S&P Global.

“Probably the biggest effect will be on confidence,” Mr. Roache said, referring to Mr. Trump’s ban. “The more you see these kinds of measures, the less you’ll have people willing to venture out of the house. That hits consumer spending.”

For multinational companies, this goes beyond consumer demand as a ban on travel would hurt research and development for companies that have laboratories across the world. This would also affect bankers’ ability to audit or work on financial details of mergers and acquisitions.

Oil Resumes Decline on Thursday After US Travel Ban