The total assets within the Nigerian banking sector may hit N44.2 trillion by the end of the fourth quarter, according to a report by Afrinvest West Africa.

Ike Chioke, the Managing Director, Afrinvest West Africa, while presenting the report with the theme ‘Beyond the Precipice…Pulling Back from the Brink’, said: “Total assets remain strong.”

Similarly, the sector total deposits are predicted to hit N29.1 trillion by the end of this year, about 25.4 percent increase when compared with N23.2 trillion achieved during the same period of 2018 and N25.6 trillion recorded in the first half of 2019.

The report also predicted that the total loan from the banking sector would surge from N15.7 trillion achieved in the first half of 2019 to N16.1 trillion by the end of the year.

The former governor of the Central Bank of Nigeria (CBN) and the current member of President Muhammadu Buhari’s Economic Advisory Council, Charles Soludo, who spoke at the presentation of the report said there has been a huge transformation in the sector when compared with past metrics, prior to bank consolidation.

“In subsequent ones, let us look at where we are in terms of the depth of the banking relative to, even in comparison to Africa. I checked banking by asset size, percentage of GDP, I was struck as to how low we are even by African standard,” Soludo said.

“Countries like Mauritius, Kenya, Senegal, Ghana and several others were much higher. That might have some implication about saving the banking financial system and the kind of economy we want to be able to empower,” he said.

Speaking further, Soludo said, “We had a dream of Nigeria becoming the African banking and financial centre. Now that we are actually integrating Africa to have Africa Continental Free Trade Agreement as it were, what kind of banking and financial system do we really need to be able to move the economy forward?

“The question is, what should be the next level for the banking system and what should be the kind of disruptive change or changes that need to be adopted to be able to move the sector to that level that it is able to power the Nigerian economy and increasingly African economy?”

However, Soludo expects the subsequent report to show the kind of industry to be expected in the next five to 10 years.

Be the first to comment on "Total Assets in the Banking Sector to Hit N44.2trn" 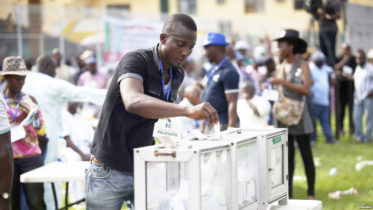 Nigeria Decides 2019: Violence, Gunshots as Nigerians Cast Their Votes As Nigerians stepped out in numbers to cast their votes in the long-awaited Presidential and…