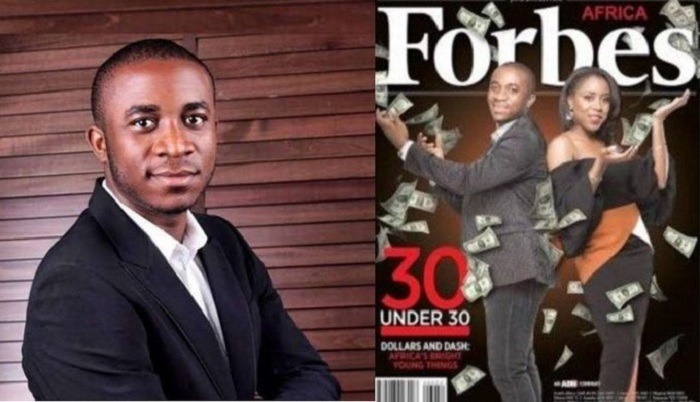 Nigerians are yet to recover from the shock of the arrest of popular Nigerian billionaire, Obinwanne Okeke; also known as Invictus Obi who was detained on Friday by the United States’ Federal Bureau of Investigation (FBI).

In 2016, Okeke became a continental sensation and mentor to several aspiring Nigerian youths after he was listed number 13 in Forbes Africa’s Under 30 as ‘Africa’s Most Promising Entrepreneur’.

Born on November 9, 1987, 31-year-old Okeke was the founder of the Invictus Group of Companies with branches in Nigeria, South Africa and Zambia. He was believed by many to have been involved in a multi-billion dollar investment conglomerate after starting from a deprived scratch, having emerged from a very poor background.

His grass-to-grace story coupled with his hypothetical successful businesses and humanitarian predisposition (as explained by his official website) may have endeared him more to the hearts of many struggling and hardworking youths who saw a picture of themselves in him.

The website reeled an emotive description of his supposed background, backing it up with a link to an account provided by Forbes on his background: “Obinwanne named his company after William Ernest Henley’s popular poem about an undefeated and unconquerable hard worker from an impoverished background who refused to give up.”

“Obinwanne’s story is quite similar. He was born to a polygamous father as the 17th child. At age 10, he left for boarding school and when he was 16, he lost his father. He kept moving from one relative to another. Things became difficult but he wanted a better life for himself and his mother.”

“As a teenager, Obinwanne took courses in business management as well as obtained a diploma as a computer technician. He later moved to Australia to study, where he said he “did all kinds of jobs just to survive.”

“He started an events/entertainment company for students called Invictus media and also interned at a poverty alleviation NGO in the country.”

“While in Australia, he founded Literacy Africa International to raise “awareness about literacy problem among children in Africa. He also sourced for donors of used children books across Australia and shipped them to disadvantaged kids across Africa. He saved some money, came back to Nigeria, and invested it in his business.

It also adds; “In 2017, Invictus Group was named as Africa’s Most Innovative Investment Company of the Year by African Brand Congress. The same year, Obinwanne was nominated in the Young African Business Leader (West Africa) category for the All Africa Business Leaders Awards ( AABLA).”

With the latest development, and through thorough evidence provided by the FBI, Okeke, in what may be described as well calculated and brilliant fraud may have successfully fooled the entire population of youthful hopefuls in Nigeria, the African continent and the world at large, having effectively deceived Forbes; a global media company.

He was linked with wire transfer fraud worth over $12 million, busted by the FBI and was arrested in one of his visits to the United States on Friday.

Thorough investigations led by Special Agent Marshall Ward of the FBI, revealed that, “In June 2018, Unatrac Holding Limited, the export sales office for Caterpillar heavy industrial and farm equipment, headquartered in the United Kingdom, contacted the FBI. They reported that Unatrac had been victimised through an email compromise, which ultimately resulted in fraudulent wire transfers totalling nearly 11million US Dollars. After reviewing the documentation provided by the representatives, the FBI opened an investigation in July 2018.”

The FBI discovered that after capturing the legitimate credentials of Unatrac’s Chief Financial Officer, the accused was able to log in and access the CFO’s entire Office365 account, which included all of his emails and various digital files, the logs indicated that between April 6 and April 20, 2018, the intruder accessed the CFO’s account 464 times, mostly from Internet Protocol (IP) addresses from Nigeria.

“With full access to the account, the intruder sent fraudulent wire transfer requests from the CFO’s email account to members of Unatrac’s internal financial team. The intruder also attached fake invoices to the emails to enhance the credibility of the requests.”

Reacting to the arrest, the head of the Presidency Office of Digital Engagement, Tolu Ogunlesi, advised aspiring fraudsters to have a re-think, saying if the Economic and Financial Crimes Commission (EFCC) does not arrest them, the FBI will.

He tweeted: “If you’re a practicing or aspiring Yahoo Boy, please read this affidavit well. If EFCC doesn’t get you, FBI will. They’ve both ramped up their clampdown on computer and wire fraud.”

Below is a scanned FBI Affidavit in support of Obi’s criminal complaint and arrest warrant. 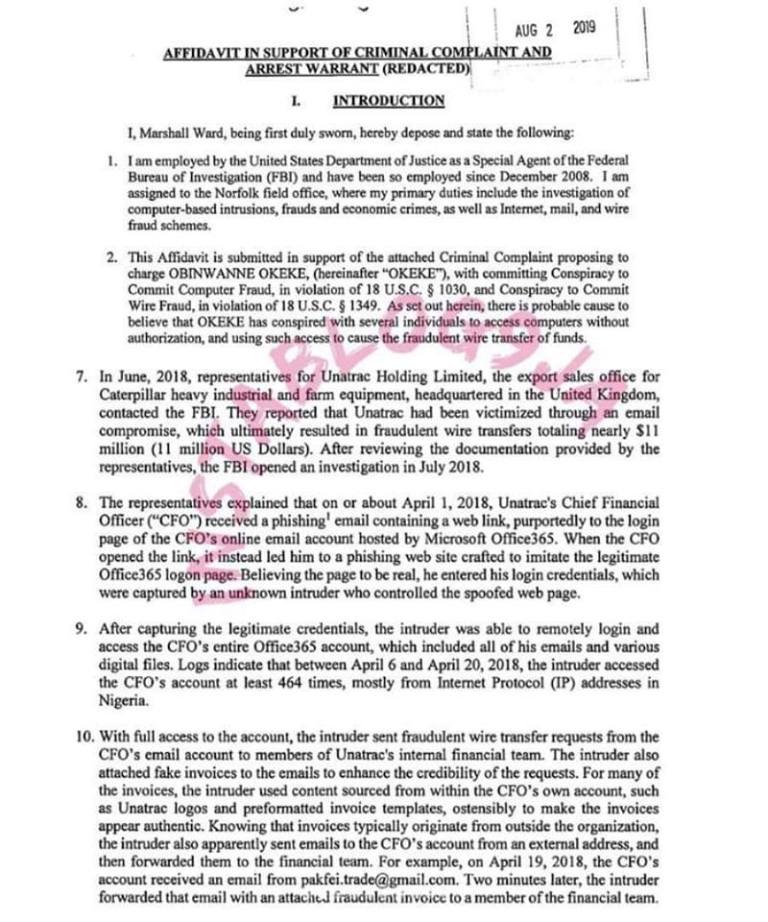 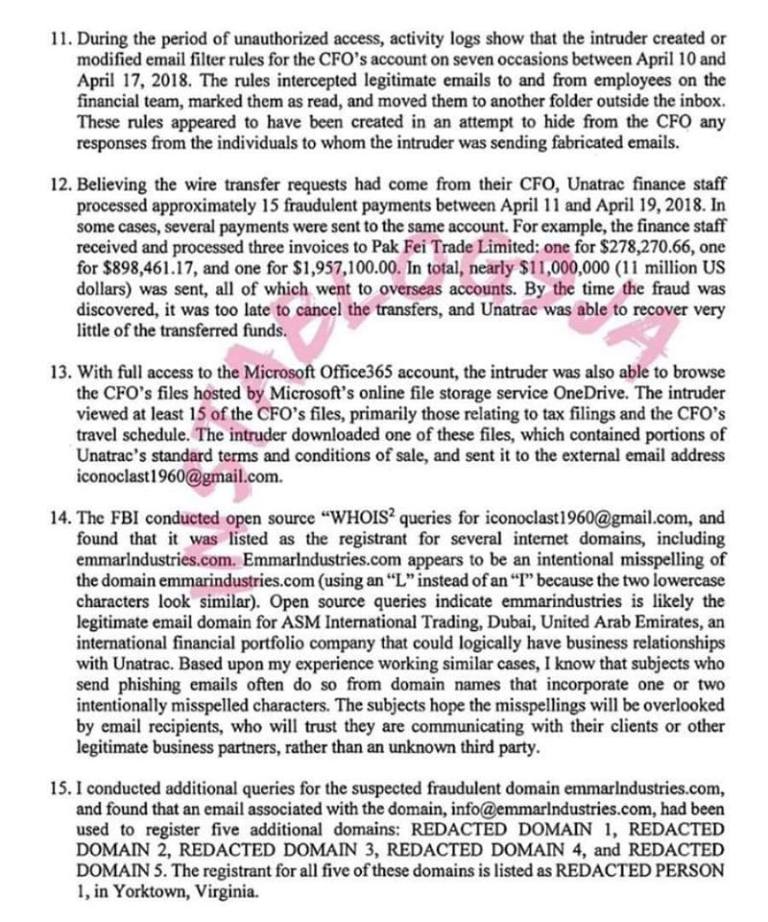 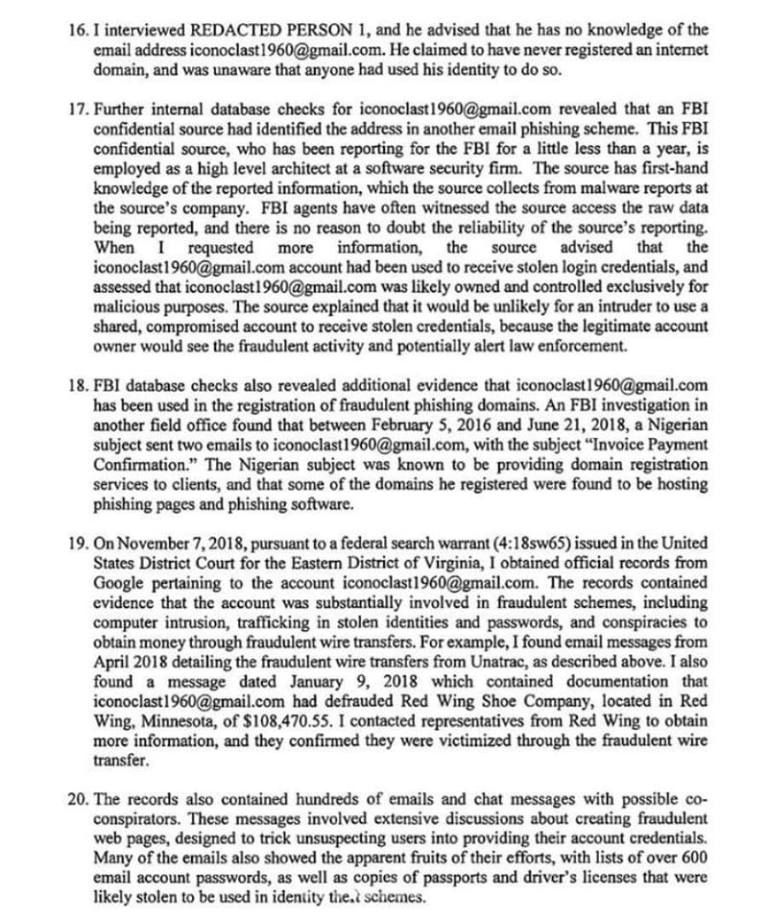 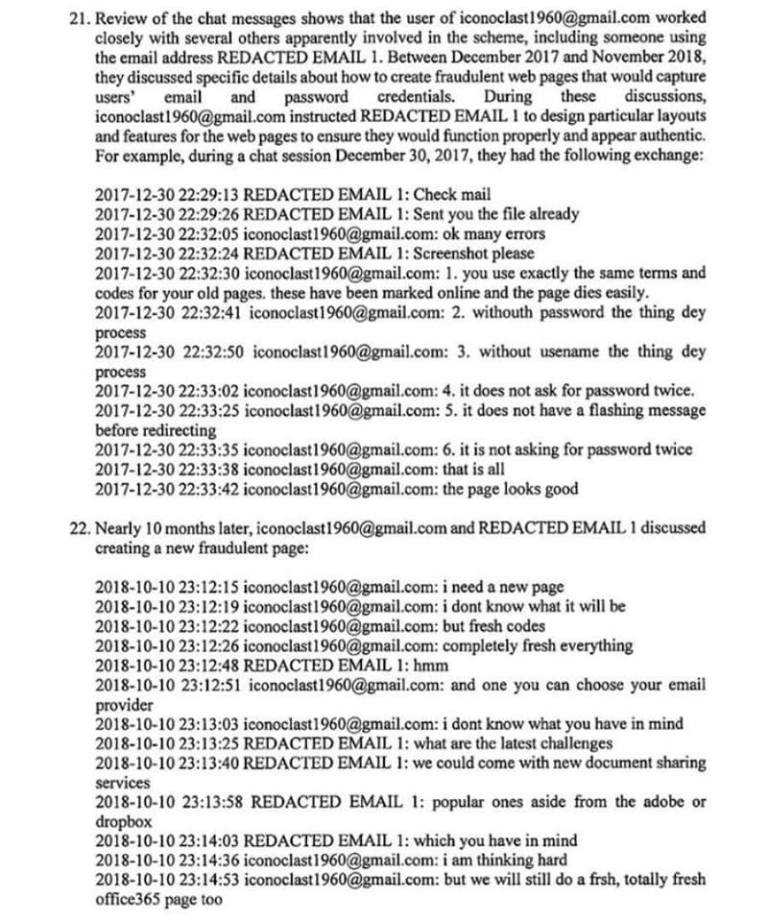 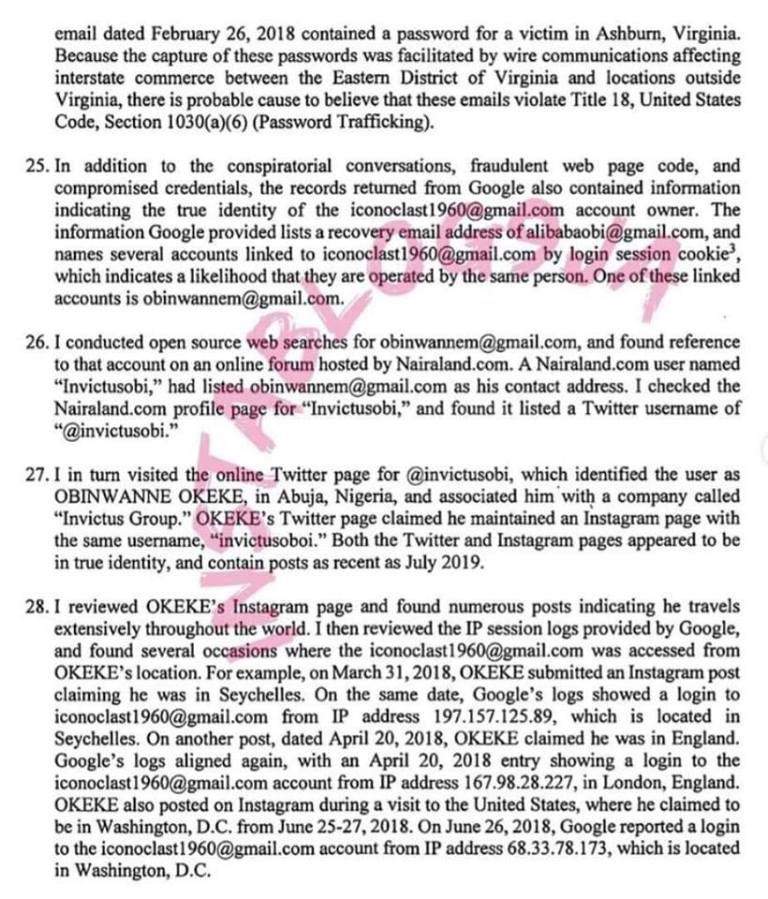 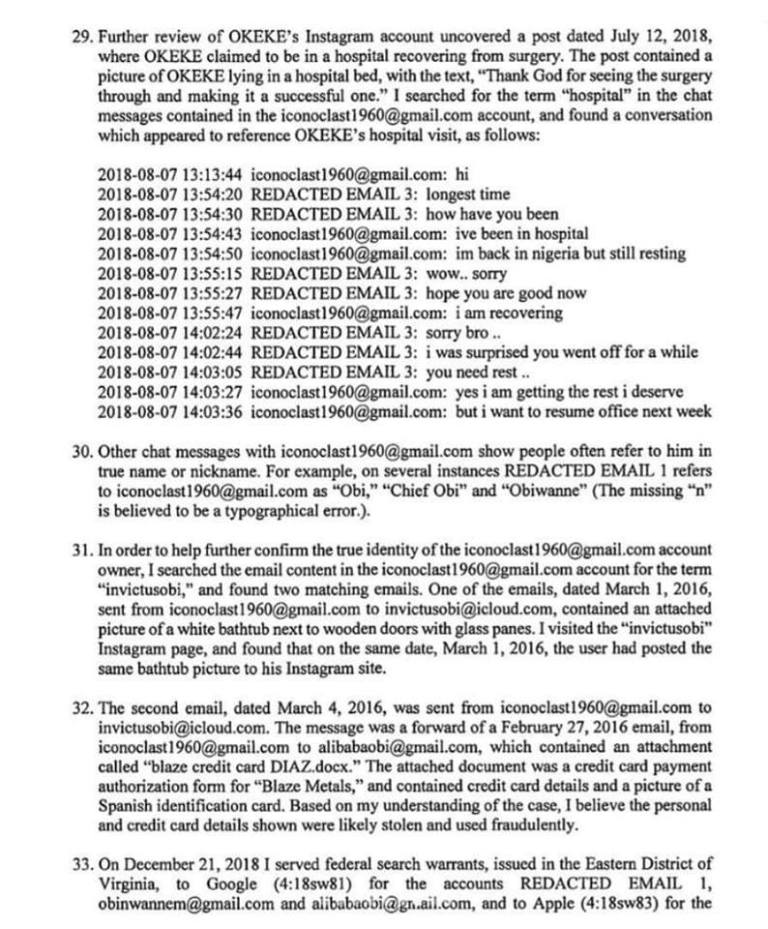 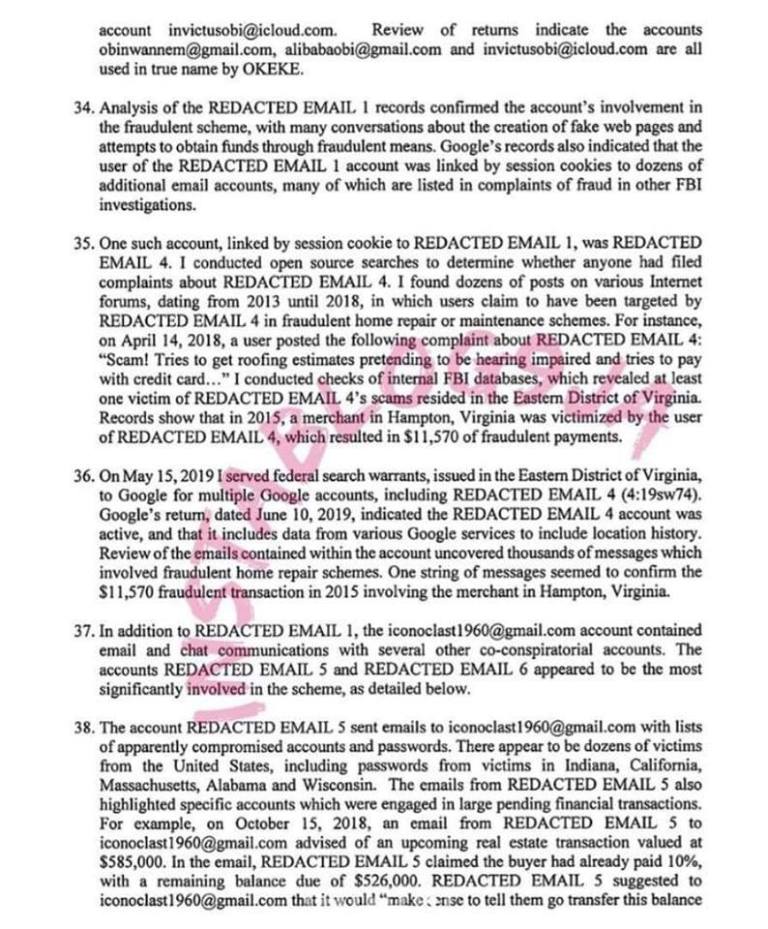 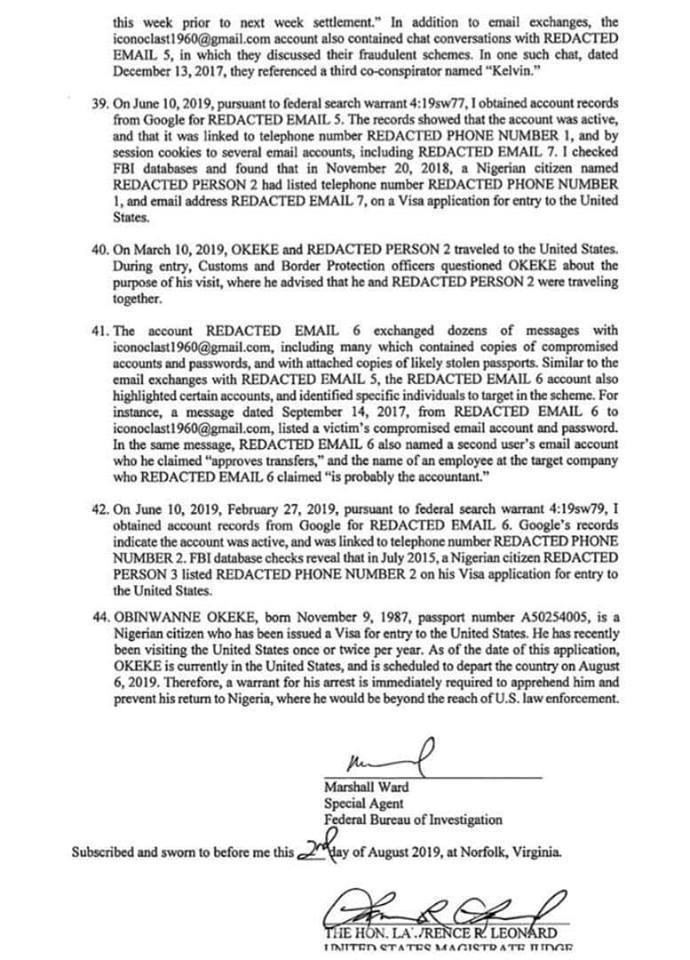 Be the first to comment on "The Invictus Obi Story: FBI Arrests Nigeria’s Forbes Listed Billionaire Over $12m Scam" 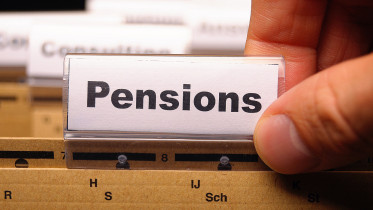 NBS: Pension Fund Assets Grow by N332bn in 3 Months The pension fund assets under management increased by N332 billion to N7.164 trillion in the…

Electricity Tariff May Increase by 61.5% Soon