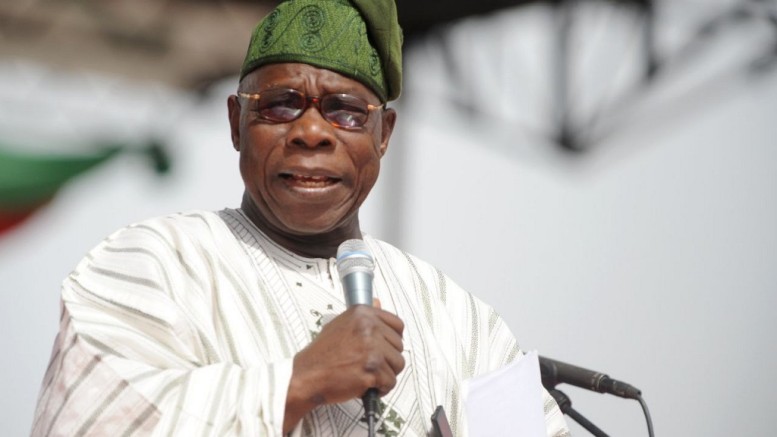 He said this on Wednesday in Abeokuta when the National Executive Council and some members of the Nigerian Association of Chambers of Commerce, Industry, Mines and Agriculture paid him a courtesy visit at the Olusegun Obasanjo Presidential Library.

The NACCIMA team was led by the national president, Iyalode Alaba Lawson.

Obasanjo, who noted that the interplay between the private and public sectors would lead to improved and innovative delivery of services through informed policy formulation, added that both needed each other to move the wheel of development forward.

He said his administration made use of this synergy and it paid off, especially in getting the formula that led to cement being produced in Nigeria and exported to other countries.

The former President stated that this was a digital age and the public sector must rise up and acquire the necessary Information Technology skills needed to survive in the modern world of telecommunications.

He said, “We cannot move forward if the private sector does not appreciate the importance of public sector in moving the economy forward.

“We did that when I was in government. I invited a major importer of cement and asked him, why can’t we become producers and exporters? And from the answers he gave, I told my then Minister of Industry to further look into the answers and fine-tune them.

“And this led to the formulation of the policy on cement. Twelve years after, cement is not only being produced here, it is being exported to other countries. That is the kind of synergy I am talking about. The symbiotic relationship between the public and private sectors must be strengthened.”

“Again, whatever we need to do, we must do it to make the civil servants ICT compliant. This is very important. I started that while I was in government but it was not sustained,” he added.

Obasanjo, who had earlier commended the Lawson-led executive for its visionary leadership in deploying ICT in collating the database of all the small and medium-scale enterprises in the country, said the association should select other areas in the economy and proffer solutions to the challenges there.

He called on NACCIMA to empower the youth and women, because “if you empower a woman, you have empowered a whole family; and when a woman earns money, she uses that money to take care of her children unlike her male counterpart.”

Be the first to comment on "Public, Private Sectors Must Collaborate for Growth, Says Obasanjo"

Access Bank Grows Profit Amid Headwinds Mixed reactions had followed the devaluation of the Naira in June 2016. Reacting to what the impact might be…