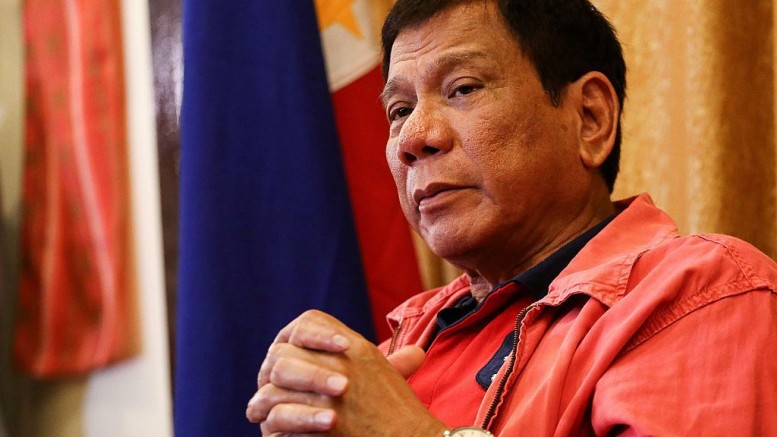 President Rodrigo Duterte has been branded a misogynist and “macho-facist” after he ordered soldiers to shoot female communist rebels in the vagina.

In a speech to over 200 former communist soldiers in Malacañang last week, the Philippines president gave a directive of what to do with female guerrilla fighters.

“‘There’s a new order coming from the mayor, ‘We will not kill you. We will just shoot you in the vagina,’ ” said Duterte. He went on to say that without their vaginas, women would be “useless”.

Duterte mentioned the Visayan word “bisong”, meaning vagina, repeatedly throughout the speech, although it was later censored from an official Palace transcript, replaced simply with a dash. However, the remarks were recorded as having drawn laughter from the audience.

The crude orders drew anger from human rights organisations and women’s groups in the region.

“It is just the latest in a series of misogynist, derogatory and demeaning statements he has made about women,” said Carlos H Conde, the Philippines researcher for Human Rights Watch.

“It encourages state forces to commit sexual violence during armed conflict, which is a violation of international humanitarian law.”

Congresswoman Emmi de Jesus, speaking on behalf of the Gabriela Women’s Party, denounced President Rodrigo Duterte as a “macho-fascist,” and said his “anti-women” remark “takes state terrorism against women and the people to a whole new level”.

She described the president as the “most dangerous macho-fascist in the government right now,” adding: “He has further presented himself as the epitome of misogyny and fascism rolled in one.”

Duterte has a chequered history of making menacing and misogynistic remarks towards women. During his election campaign in 2016, speaking about the 1989 prison riot in which an Australian missionary was killed, and inmates had lined up to rape her, Duterte joked he wished he had the opportunity to rape her himself.

“Was I mad because of the rape? Yes, that’s one. But, she was so beautiful, the mayor should have been first. What a waste,” he said. In May last year, he also told soldiers in Mindanao – apparently as a joke – that while martial law was imposed, he would protect them from prosecution if they raped three women.

Last week it was announced that the International Criminal Court were looking into complaints that Duterte had committed crimes against humanity in his brutal and bloody war against drugs, which has seen a deat toll of over 4000. But the President said he did not mind being indicted and imprisoned by the International Criminal Court as long as it allows conjugal visits by more than one woman.

His spokesperson Harry Roque subsequently dismissed the allegations that Duterte was sexist and misogynist.

Coronavirus: Death Toll Rises to 213 in China as WHO Declares Emergency

Trump-Xi Summit Accomplishment: Getting to Know One Another

Be the first to comment on "Philippines: Rodrigo Duterte Orders Soldiers to Shoot Female Rebels ‘in the Vagina’"

MTN Needs to list on Nigerian Bourse  The Minister of Communications, Adebayo Shittu, has urged MTN Nigeria to list its shares on the Nigerian Stock…