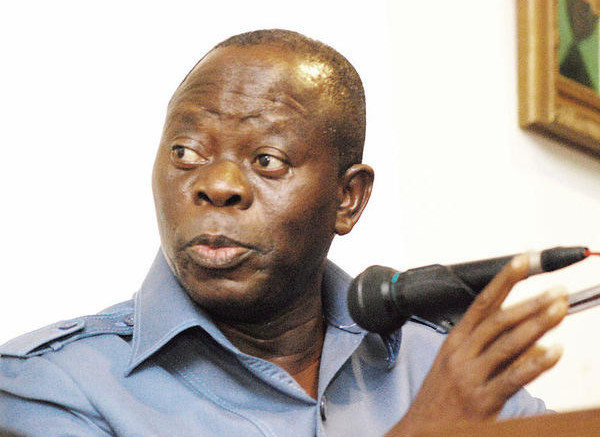 The National Chairman of the All Progressives Congress (APC), Comrade Adams Oshiomhole has said that the party did not offer Senator Iyiola Omisore any financial inducement to gain his support during the rerun election conducted on Thursday, adding that the former Deputy governor never made any demand.

Oshiomhole also gave reasons why the party disqualified the Minister of Women Affairs, Hajia Aisha Jummai Alhassan from contesting the governorship elections primary in Taraba state, saying the party was not convinced about the loyalty of the minister to the party.

Addressing a news conference in Abuja, the former Edo State governor said the party gave Senator Omisore the opportunity to sponsor candidates to contest elections on the APC platform, stressing however that those saying the APC offered him money was out of place.

He said “I said we had a negotiation and had a deal that has to do with the governance of Osun State. I didn’t go with money and I don’t have money to give to anybody. He didn’t ask and there was no basis for him to ask.

“The word automatic ticket has meaning. Having regards to the provisions of electoral acts which makes primary mandatory, can you at the same time talk of automatic ticket? Even when I spoke to our National Assembly members, it is not that I don’t know that word exist, but I simply didn’t find it useful and never used it.

“We agreed that he will have an opportunity for him to contest for a seat on APC platform. Not just for senate or House of Representatives, but also for house of assembly. That is why I said we spoke about the immediate which is the Osun election and going forward.”

“It was clear that the SDP was largely in control of those areas. If you want to do a Coalition, you identify the leaders who have influence and enter into negotiation. Why PDP were shouting in the morning, that they were going to challenge the rerun their leader went to Senator Omisore to persuade him to negotiate a possible working arrangement.

“Recognizing the fact that SDP was critical to this conversation, we decided to also open negotiation with their leadership and I was impressed by his emphasis. He told us that, yes he has lost, but he believe that he can still win if we have a deal that seeks to address the primary purpose of his participation in the process which is the governance of the state and specific policy issues that were of concern to him.

“We had a robust conversation and reached an agreement which I think is healthy. We didn’t have to negotiate about compensation or about paying money to anyone. The issue was about governance, education and how we can have a working relationship ahead of the general election and in future elections.

“For democracy to flourish, only people who can accept the pain of defeat should participate in an election because there must be a winner and a loser, but for PDP to take the position as if election is only free and fair if they win is not ideal.

Speaking on why the Minister of a Women Affairs was disqualified, Oshiomhole said “as for the Honourable Minister of Women Affairs, she has issues that have to do with party loyalty. Our constitution is clear and it dictates that to contest elections or even hold office in the APC, you must be loyal to the party in every material concern.

“From all she had said in the past and even her comments and general attitude during the screening, the NWC reviewed everything taken together and we arrived at the conclusion that she does not possess the level of loyalty that the APC requires for her to contest elections on our platform.

“We made it clear when the defections happened that APC may well benefit from these defections if it helps us to be more critical in terms of who we give platform to contest elections and that there are core values that binds the APC together and they are non-negotiable.

“The Electoral Act and the APC constitution forbid anyone from being a member of more than one political party at a time. You cannot be a member of APC and be a card carrying member of another party but when you have a situation where it would appear, based on what you know and based on what I know that someone is probably APC in the day time maybe for the purpose of retaining certain offices and they are PDP at heart.

“Or if they are not PDP at heart, they are actually and simply a follower of a one-man permanent presidential candidate…then we have the right to ask ourselves if these attitudes and qualities are characteristics of an ideal member of an APC.

“So, those are the reasons. We did not want to have a lengthy explanation to do but she knows why she was disqualified and we know why we denied her the use of our platform.”

On the Minister of Communication, he said: “He admitted that he did not do the mandatory NYSC as provided for under the law and in his own judgment, his being a member of the House of Assembly in the state and now as a minister of the federal republic that these were enough sacrifices.

“But for us as a party we know that NYSC is a mandatory scheme. It is not something you may elect to do or abstain from doing and my understanding of the NYSC Act is that no employer of labour is permitted to employ anyone who graduated under 30 years and who did not obtain an exemption for reasons as provided for in the NYSC Act.

“So, for us, not participating in the NYSC raises very serious moral issue as well as legal issue. After interviewing him, we were convinced that….for our party, there are clear lessons we need to learn from our recent past when people… anyway, we were convinced that if he did not do NYSC, that for us was enough to disqualify him and we had to find the courage to do so.”

While commending the people of Osun State for keeping faith with the party, Oshiomhole said: “We have seen over the period that the opposition party has always, whenever it is not winning election raise issues of rigging. But I do understand PDP is quick to suggest rigging in any election in which it is not favored by the electorates.

“The Osun election was substantially free and fair. The fact that some votes were cancelled suggests that something’s went wrong the first day. But that those cancellations were effected by INEC also showed the independent of INEC to make decisions on the spot based on evidence on ground.

“Reviewing the opinion of genuine monitors, you realize that the fact that it was inconclusive was accepted by both local observers and foreign observers. PDP disagreed with the idea of conducting elections in those places where the elections were cancelled.

“There have been rerun elections in the past that favored the PDP. A lot of the governors today elected on the PDP platform especially in the south south are beneficiaries of inconclusive and inspite of our reservations, we had to accept those outcome.

“In the Osun election, nobody can talk of landslide victory. If anyone had access to manipulate those figures, you will not rig election and do so half-heartedly to a point of leading to inconclusive election.”

UBA to Reward Customers With N120m

Be the first to comment on "Osun Election: Our Deal With Omisore, by Oshiomhole"