Petroleum Products Pricing Regulatory Agency (PPPRA), has said there is no going back on the pump price of Premium Motor Spirit (PMS) also known as petrol, saying that under current realities, it should have been higher.

PPPRA’s defence follows recent allegations by the House of Representative, accusing the Agency of impoverishing Nigerians by making them incur unnecessary costs in its pricing template.

But the Agency said it cannot be held responsible for the prevailing pump prices for petroleum products, as it cannot on its own determine the pricing template.

An Ad-hoc Committee of the House on the Review of Pump Price of Petrol, at a public hearing earlier in the week had called for the reversal of the current petrol price from N145 per litre to N70 a litre.

The Committee identified some extraneous costs in the petrol pricing template like the 84k port charge and the 30k administration charge, saying they were fraudulent.

It noted that the 84k was for services never provided by the Nigerian Ports Authority, NPA, while the 30k was already provided for in the budget of the PPPRA, adding that the administrative charge was even increased by 100 percent from 15k following the removal of subsidy in 2016.

But a top ranking PPPRA official, said in confidence that all the stakeholders came to the table to decide how much a litre of petrol should be sold.

“PPPRA should not take the blame alone. The whole stakeholders should be blamed for the current template. Whenever we review, the stakeholders and the government approve for execution. The template is only domiciled in PPPRA,” he added.

He argued that but for the Federal Government’s intervention, the price of petrol should have been higher than it is presently in view of the foreign exchange challenges.

According to him, petrol price was calculated at less than N300 to $1 whereas the exchange rate is almost N498 to $1, noting adding that marketers cannot even access dollars from the Central Bank of Nigeria (CBN).

Be the first to comment on "No Reduction on Petrol Price, says PPPRA" 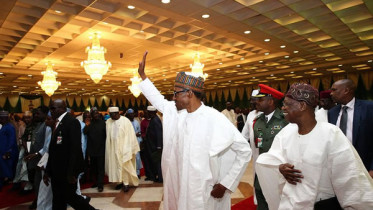 President Muhammadu Buhari has said that before Nigerians demand to see the changes he promised them during the 2015 election, they must first change their…