The Nigeria Extractive Industries Transparency Initiative said that Nigeria lost at least $16 billion in ten years due to non-review of the 1993 Production Sharing Contracts with oil companies.

This was one of the highlights of the latest report by NEITI released in Abuja Sunday. It was tagged “The Steep Cost of Inaction”.

The study done in conjunction with Open Oil, a Berlin-based extractive sector transparency group, found that the losses could be up to $28 billion if, after the review, the federation were allowed to share profit from two additional licenses.

NEITI, therefore, called for an urgent review of the PSCs to stem the huge revenue losses to the federation.

It added that the review was particularly important for Nigeria because oil production from PSCs had surpassed production from Joint Ventures with PSCs now contributing the largest share to federation revenue.

NEITI stated that the Deep Offshore and Inland Basin Production Sharing Contracts provided for a review of the terms on two conditions.

“The first review was to be triggered if oil prices exceeded 20 dollars per barrel.

NEITI observed that this review should have been activated in 2004 when oil prices exceeded the 20 dollars per barrel mark.

It added that although the review was not done in 2004, the judgement of the Supreme Court in October 2018 had mandated the Attorney General of the Federation to work together with the governments of Akwa Ibom, Rivers and Bayelsa States to recover all lost revenues accruable to the Federation with effect from the respective times when the price of crude oil exceeded $20 per barrel.

It further stated that the second review was to be activated 15 years following commencement of the PSC Act, where Section 16 (2) states that “Notwithstanding the provisions of subsection (1) of this section, the provisions of this Decree shall be liable to review after a period of 15 years from the date of commencement and every 5 years thereafter”.

The transparency watchdog disclosed that at inception in 1993, the PSC terms were drawn up to attract oil and gas companies to invest in the exploration and production of offshore fields considering the risks involved coupled with low oil prices.

“Thus the PSC contracts were supposedly more beneficial to the companies. However, the Law anticipates that the companies would have recouped their investments when oil price increases and after many years of operations, hence the two trigger clauses in the Act.

“Since the Supreme Court judgement has addressed the condition for the first review, this second review was the focus of NEITI’s Policy Brief.

“This second review should have happened in 2008 and informed why it chose 2008 as the the start date for commencement of estimated losses in the model,” NEITI noted.

It explained that to determine the losses, the analysis was conducted for the seven producing fields of the 1993 PSCs, which are Abo (OML 125): operated by Eni; Agbami-Ekoli (OML 127 & OML 128): operated by Chevron; Akpo & Egina (OML 130): operated by Total and South Atlantic Petroleum; and Bonga (OML 118): operated by Shell. 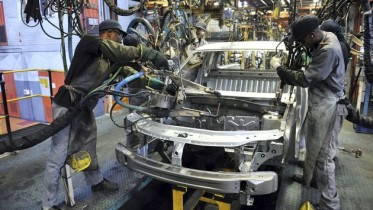 The Nigerian manufacturing sector declined in August, following a slowdown in business activities in the nation due to the global oil glut that crippled every facet…

$1trn Stolen From Africa to Western Countries in 50 Years – UN