Following the Central bank of Nigeria (CBN)’s decision to adjust the foreign exchange rate of the Nigerian Naira from N307 to a US dollar to N360 on Friday to accommodate the changes in macro fundamentals, investors in London traded the local currency at N515 to a US dollar in a foreign exchange non-deliverable forwards market.

A foreign exchange non-deliverable forward contract is an agreement entered by two parties to exchange certain currencies at a given spot rate on a future rate.

The naira’s one-year forward price, which gives a clue of where the currency is likely to trade in a year, declined by 11.3 percent on Monday. The highest in recent years.

While in the Non-Deliverable Forwards (NDF) market in London, the currency was priced at N515 to a US dollar in a year’s time. However, naira futures contracts of the same tenor were quoted at N385/$1.

“It is clear that the central bank will be unable to maintain exchange rate stability if global oil prices remain near current lows in the months ahead,” said Cobus de Hart, senior economist at South Africa’s NKC African Economics.

A nine-month tenor forward also decline by more than 11 percent while shorter tenors were down by 5 percent.

However, the difference between a year naira forwards and futures rose to N130 on Monday from N30 it traded in January due to the increase in the number of investors hedging against future risk.

According to traders, the naira futures one-year contracted on offer by the central bank was revised upward by N15 on Monday.

The Central Bank of Nigeria (CBN) continues to make adjustments to the foreign exchange rate of the naira to accommodate Nigeria’s current reality and ease pressure on the foreign reserves due to weak revenue generation. 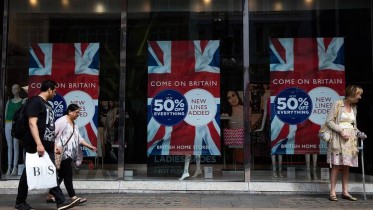