Naira Slides Against the US Dollar Across Key Forex Markets

The Nigerian Naira slipped against the United States dollar on Tuesday after reports that the Vice President had a meeting with the Ministers and MDAs heads to review plan to have a single-window platform for importing and exporting processes in Nigeria.

The local currency slipped by N5 from N455 it traded against the US dollar earlier on Tuesday on the black market to N460. While against the British Pound, the Naira remained at N555 it exchanged last week.

This is not the same against the Euro single currency as the local currency gained N3 from the N498 it traded on Monday to N495.

On the Investors and Exporters Forex Window, the Naira lost 63 kobo against the US dollar to trade at N386.63. This was slightly higher than the N386.33 it opened the day.

Activity on the I&E Fx Window surged from $63.44 million traded on Monday to $90.9 million Tuesday.

However, scarcity continues to dictate foreign exchange rates across key forex markets as traders fear the apex bank may finally scrap other foreign exchange windows in a move to have a single forex rate for the nation.

Mr. Laolu Akande, the Senior Special Assistant on Media and Publicity to Vice President, on Tuesday tweeted that the vice president finished presiding over a meeting on National Single Window Trading Platform Committee.

He said, “VP Osinbajo just finished presiding over a meeting of National Single Window Trading Platform Committee, with some ministers-including Finance; Industry; & MDAs heads: Customs & NPA to review plan to have a Single Window platform for all importing & exporting processes in Nigeria.” 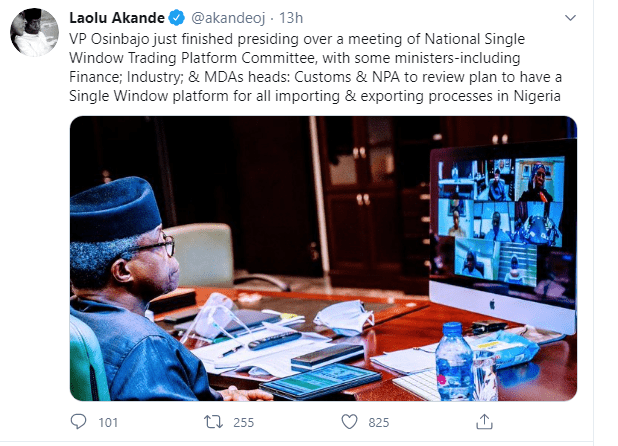 This is in line with the unconfirmed report that the central bank and the federal government are working on a single foreign exchange rate for the currency to hurt speculators and hoarders manipulating forex rates for personal gain.