Excelsior Shipping Limited, one of the largest shareholders of Flour Mills, has purchased another 1.8 million shares from the company.

In a statement signed by the company’s Secretary and Legal Services Director, Umolu Joseph and released on the Nigerian Stock Exchange website, Flour Mill said Excelsior purchased 1,800,000 shares at N21 per share.

According to the company, the transaction took place on June 26, 2020 in Lagos, Nigeria. 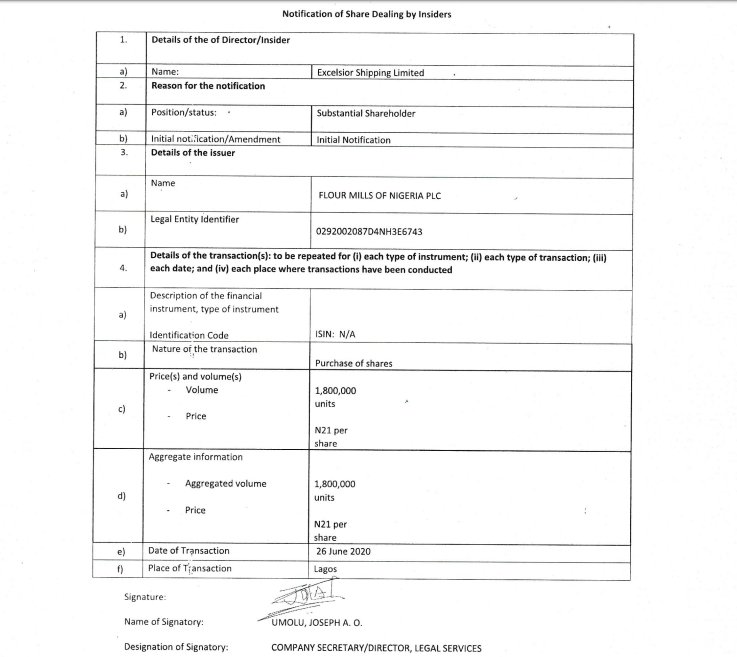 List of Incoming and Exiting Companies From Nigerian Indices

The Nigerian Stock Exchange closed in the green on Thursday as the stocks of mobil, dangote cement and others closed higher.

Investors traded 359.307 million shares valued at N3.873 billion in 3,576 transactions during the trading hours of Thursday.

The market capitalisation of listed equities grew to N13.581 trillion while the NSE All-Share Index gained 0.79 percent to close at 25,987.14 basis points. See the details below.

In eight different filings with the Nigerian Stock Exchange (NSE), the Board Chairman, UBA, Tony Elumelu and relatives increased stake in United Bank for Africa (UBA) in a move that suggested confidence in the lender’s future and an opportunity to increase Elumelu family’s stake in one of Africa’s largest banks.

This was followed by Nneka Elumelu and Ogechukwu Elumelu, relatives of the Chairman that acquires 106,464 shares and 127,673 shares at N6.0 per share per unit on the same day in Lagos.

Likely scenario for an all out purchases, the family may want to capitalise on the low stock price given the current weak stock market outlook or there is an underground deal or detail they are privy to as witnessed during access bank Zambian acquisition a few months back.

The move may also be a gift to relatives from one of Africa’s richest men.

Stock Market Transactions Dip by 8.5% in August as Foreign Investors Take Back Seat

Foreign Investors Pullback as Transactions’ Value Dip by 8.5% in August

The total value of transactions carried out on the Nigerian Stock Exchange (NSE) in the month of August stood at N94.5 billion or US$244.27 million, representing a decline of 8.49 percent from N103.21 billion or $265.55 million posted in July.

In the NSE’s Domestic and Foreign Portfolio Investment report released for the month of August, total transactions decreased by 22.58 percent when compared to N121.99 billion achieved in August 2019.

The report noted that the total transactions executed by domestic investors decreased by 19.16 percent from N68.62 billion in July to N55.47 billion in the month of August 2020.

A further breakdown of the report showed the total value of transactions executed by local investors outperformed transactions carried out by their foreign counterparts by 18 percent.

Accordingly, domestic investors’ participation stood 59 percent while foreign investors account for 41 percent of all the transactions performed during the month.

Also, the total capital inflow from domestic investors stood at N29.49 billion in the month under review while foreign investors injected N17.66 billion into the bourse.