Speaking in Lagos during the inspection of over seven container loads of products intercepted by the agency’s Enforcement Team, Aboloma lamented that the importers of the products tooking undue advantage of government’s good intentions in promoting ease of doing business in the country.

Aboloma said some of the importers were issued import permits for raw materials and machinery in furtherance of the nation’s economic diversification programme but ended up importing finished goods.

According to him, the intercepted containers most of which came through the Tin Can Port, were all carrying products different from those declared at the points of clearance.

Enumerating the infractions, Aboloma said plywood were declared as electric goods; used clothes as plumbing and building materials, while refrigerators were declared as cutting machines and agricultural appliances.

Others according to him include, generators declared as industrial raw materials; kerosene cooking stoves and aluminium coated roofing sheets as plumbing materials.

He frowned at the deliberate efforts of those he described as unscrupulous importers and their collaborators to undermine the Nation’s strive towards transparency and the ease of doing business especially at the entry points.

He reiterated SON’s determination to promote compliant trade as part of efforts to implement the provisions of its 2015 Act to the letter, in order to prevent unwholesome, substandard and life endangering products from entry and circulation in Nigeria.

Mr. Aboloma promised to intensify the prosecution of importers of substandard products in addition to seizure and destruction of the products after due process.

SON, according to him has in line with the Presidential Executive Orders amended its standards operating procedure to provide for a 24hour surveillance on suspected substandard consignments that may have escaped detection at the seaports or land border posts.

“This is in order to protect unsuspecting consumers from the dangers associated with substandard and life endangering products and the economy from the attendant loss of revenue and threat to genuine local manufacturers” he said.

The SON helmsman challenged importers to reciprocate Government’s good gesture of promoting ease of doing business with honest and transparent declaration in the clearance of goods at the seaports, airports and the land border posts.

“No one is allowed by law to harm, maim nor kill Nigerians with substandard products under the guise of doing business” he said.

Mr. Aboloma concluded that samples of the over N200million worth products have been sent to the relevant SON laboratories for tests and analysis to enable informed decisions on them. 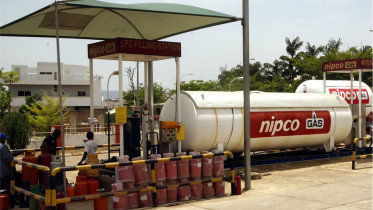 NIPCO Shareholders Okay N563m Dividend Shareholders of NIPCO Plc have approved the payment of N563 million as dividends for last year. This represents a dividend…

Buhari Travels to UK for Check-up, Hands Over to Osinbajo