The Accountant-General of the Federation, Alhaji Idris Ahmed, has said that the recent announcement by the International Monetary Fund that Nigeria has the largest economy in Africa, demonstrates the resilience of the economy.

Despite the worst economic recession Nigeria had faced in 29 years, the IMF, in its Economic Outlook Report for October, projected Nigeria as the biggest economy in Africa ahead of South Africa and Egypt.

Ahmed, who spoke on the sidelines of the Federation Account Allocation Committee Meeting on Friday in Abuja, attributed the growth in the economy to the on-going massive capital investments in the country.

“It also goes to confirm the massive capital investments that are being made by this government and it is not just by the Federal Government but by the state governments as well.

“So, we will come out of this recession. It is just a matter of time.

“All the necessary indicators and stimulants have been put in place and we are already beginning to reap the benefits of what is being done.”

The Permanent Secretary, Federal Ministry of Finance, Mr. Mahmoud Isa-Dutse, said Nigerians should have confidence in the economy.

He said, “It is welcome news; I remember when South Africa overtook Nigeria, it was by a small margin. So, I am not surprised that we have once again taken our rightful position.

“We will surely come out of our present economic problems and the potential for growth are much higher.”

Isa-Dutse said that with the present fiscal and monetary policies, the economy was on the path of expanded growth. 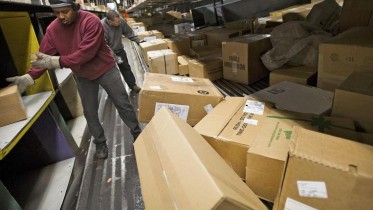 UPS Plans to Hire 100,000 People During Holiday Season The United Parcel Service Inc announced on Monday it would hire around 100,000 temporary employees for…