Larry Page, the co-founder of Google and the CEO of Alphabet, announced he will step down from his position as CEO while co-founder Sergey Brin will also step down as president of the company.

Sundar Pichai, Google CEO, has been appointed to take over as CEO of Alphabet in addition to his present role, Brin’s role will be eliminated, according to a statement released by Page and Brin.

“With Alphabet now well-established, and Google and the Other Bets operating effectively as independent companies, it’s the natural time to simplify our management structure,” Page and Brin wrote in a blog.

“We’ve never been ones to hold on to management roles when we think there’s a better way to run the company. And Alphabet and Google no longer need two CEOs and a President.”

“We plan to continue talking with Sundar regularly, especially on topics we’re passionate about!

“Sundar brings humility and a deep passion for technology to our users, partners and our employees every day. He’s worked closely with us for 15 years, through the formation of Alphabet, as CEO of Google, and a member of the Alphabet Board of Directors. He shares our confidence in the value of the Alphabet structure, and the ability it provides us to tackle big challenges through technology. There is no one that we have relied on more since Alphabet was founded, and no better person to lead Google and Alphabet into the future.”

This was after Jack Ma, the founder of Alibaba and China’s richest man, stepped down as the CEO of Alibaba, the world’s largest e-commerce company, to focus on education and philanthropy.

Tech executives that started current trends have realised that their efforts can only be sustained by young and efficient minds. Therefore, they are relinquishing their positions as the powerhouse technology to sharp minds.

Be the first to comment on "Google Founders Step Down, Pichai Take Over" 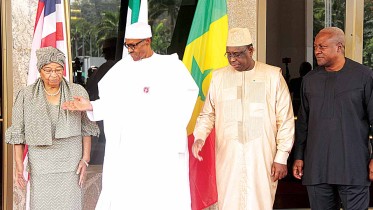 Buhari kicks Against Same Currency for West Africa by 2020

Buhari kicks Against Same Currency for West Africa by 2020 President Muhamadu Buhari on Tuesday in Niamey, Republic of Niger, urged member countries of the…

Aiteo to Pay Rohr, Others N2.5bn as Salaries for Five Years