Records revealed that the reserves, which had suffered significant decline in the past, had been maintaining a steady rise of recent.

The CBN Governor, Godwin Emefiele, had earlier said that because crude oil was a major source of the country’s foreign exchange, the nation’s economy became sensitive to fluctuations in the price of crude oil.

He noted that the CBN tightened money supply in order contain inflation while improving yields in local bonds, which attracted the attention of foreign investors.

He said, “Second, we analysed our import bill and encouraged manufacturers to consider local options in sourcing their raw materials, by restricting access to foreign exchange on 41 items. Third, the Investors and Exporters FX window was introduced, which allowed investors and exporters to purchase and sell foreign exchange at the prevailing market rate.

“The impact of these three measures led to an increase in foreign exchange inflows into the country; Transactions in the I&E FX window reached $24bn ($6bn net inflows) in 2017 and Nigeria’s foreign exchange reserves rose to over $48bn at the end of May 2018 from $23bn in October 2016.”

Be the first to comment on "Foreign Reserves Gain $6.42m in Three Weeks" 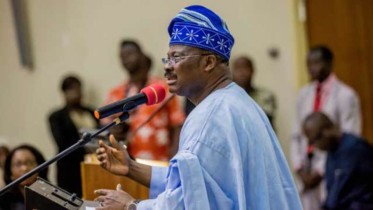 Oyo to Benefit From $200m Livestock Loan A Senior Economist with the World Bank, Mr Samuel Taffesse, says Oyo State is among the 16 states…