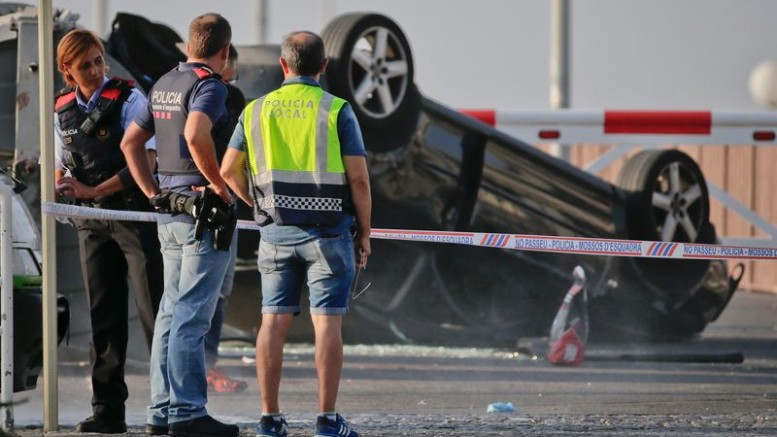 An overturned car where the attackers were intercepted by police in Cambrils. Photographer: Emilio Morenatti

Spanish police killed five suspected terrorists after a confrontation in a town south of Barcelona, just hours after a van rampaged down the city’s iconic Las Ramblas avenue and left 13 people dead.

Six civilians and a police officer were injured in the second incident in the nearby resort town of Cambrils, which the government said was connected to the Barcelona attack. The terrorist suspects wore phony explosive belts and ran over pedestrians in an Audi automobile until they were shot by police, Catalan Interior Counselor Joaquim Forn said in a radio interview.

In Barcelona, the rented van drove about 600 meters (2,000 feet) down the heavily trafficked avenue striking pedestrians, local media reported. The driver is still at large.

Spanish authorities are trying to hunt down the perpetrators of Thursday’s attack in the heart of Barcelona, which bore all the hallmarks of similar recent atrocities in Berlin, Nice, London and Stockholm. In addition to the victims, at least 100 people were injured after a white van drove into pedestrians at a speed of about 80 kilometers per hour (50 miles per hour). Twenty-six of the injured were French, the nation’s foreign ministry said.

Islamic State said it was responsible, according to the SITE Intelligence Group. Three suspects were arrested in connection with the Barcelona attack, with police not yet disclosing all their names and nationalities.

The attacks raise questions again about how authorities can protect citizens from crude assaults that can be planned under their radar. Britain responded to similar incidents in London this year by erecting concrete and metal barriers to shield pedestrians at key sites of the city. Spain has long been used to bombing campaigns by Basque and Islamist terrorists, but the rampage was the first of its kind on Spanish soil.

“Unfortunately, as we’ve seen before, there’s not a lot authorities can do to prevent this type of attack, which is quite easy for someone to plan and to execute,” said Federico Santi, an analyst at political risk firm Eurasia Group. “It requires a huge amount of resources to actually monitor the very large number of people who are at risk.”

Images of bloody victims lying on the sidewalk have become all too familiar in Europe of late. Terrorists in London drove into passersby on bridges in two deadly incidents this year. There was also an attack using a commercial vehicle in Stockholm. Last year, trucks plowed through crowds in Berlin and Nice. Barcelona may have been targeted simply because it’s a major tourist destination for Europeans as a whole, Santi said.

The van zigzagged into people, a witness told state broadcaster TVE. Las Ramblas — a busy avenue with bars and street artists at the heart of Barcelona’s tourist circuit — was strewn with bodies and debris as people ran to help the wounded.

“The car came toward me, people were flying in the air — there were bodies everywhere,” Shari Weise, a 54-year-old visitor to Barcelona from California, said by telephone. “The man next to me got hit and I jumped behind a pole and pulled a 15 year-old boy behind the pole with me.”

Police raised the possibility that an explosion at a home earlier on Thursday that killed one person and brought down a building may be connected to the attack.

Islamic State has threatened more attacks in Europe as its militants lost territory in Syria and Iraq. While some of the previous terrorists had training, others have just been inspired by the extremists with little or no formal contact.

The number of foreign terrorist fighters returning to Europe could increase, according to the European Commission’s Radicalisation Awareness Network. More than 42,000 foreign fighters joined the Islamic State between 2011 and 2016 and as many as 3,000 of them could return to European Union member countries, the analysts wrote in a report last month.

When the group claimed responsibility for the more than 80 deaths in Nice, it said the assailant in a truck loaded with arms was responding to its call to target countries fighting its militants in the Middle East.

Preventing attackers using vehicles as weapons is now the latest challenge for security services in Spain, even though the country isn’t a leading member of coalition strikes on Islamic State strongholds.

The nation has been a target of Islamist terrorism before. About 200 people were killed by bombs on early morning commuter trains in Madrid in 2004. Though like in most capitals until recently, tourist thoroughfares typically don’t have the barriers used to protect institutions like courthouses.

The task is potentially further complicated in Spain by its devolved administrations. Power over home affairs and police lie with some regional governments, including Catalonia. While attacks in other cities have fueled anti-immigrant nationalist parties, Spain has no such mainstream group. Any political fallout is more likely to focus on the rifts between the administrations in Madrid and Barcelona.

“I want to express the solidarity of Spain with the city of Barcelona, which today has been hit by the jihadist terrorism as before were hit other cities around the world,” Rajoy said in a televised address from the city.

Marc Trevidic, a former French anti-terrorist magistrate, said the scope of the Barcelona assaults was remarkable.

“This is much more organized than what we’ve seen recently, with a structured group,” Trevidic said in an interview on Europe1 radio. “There have been networks in Spain for decades linked to radical Moroccan movements. There have always been organized groups in Spain, but they haven’t always had an interest in hitting Spain.”

The nation is the world’s biggest tourist destination after France and the U.S. and the Catalan city of Barcelona is among its star attractions. Spain received more than 75 million foreign visitors last year and tourism accounts for about 13 percent of all of jobs.

“London, Brussels, Paris, and other European cities have suffered this experience,” Catalonia’s regional president, Carles Puigdemont, told reporters Thursday. “And today it has happened to Barcelona.” 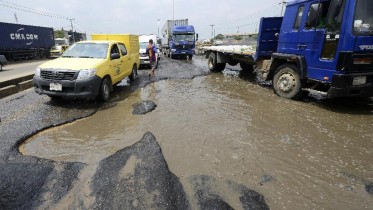 Minna Gridlock Blamed on Extortion by VIOs Investigation has revealed that the gridlock being experienced by commuters and motorists in Minna, the Niger State capital,…