The Chairman, Federal Inland Revenue Service, Mr. Tunde Fowler, says the agency has collaborated with the Office of the Accountant General of the Federation to ensure that Ministries, Departments and Agencies remit tax revenues promptly.

This, he said, was achieved through the implementation of the Government Integrated Financial Management Information System, which ensures that Value Added Tax and Withholding Tax were deducted from source on all Federal Government contracts.

Fowler said this was part of moves by the Federal Government to drive tax revenue and enhance payment of taxes by all individuals and corporate bodies.

The FIRS chairman spoke in a keynote remark at the 44th Annual General Meeting of the Association of Advertising Agencies of Nigeria in Lagos on Friday.

“We have also improved collaboration with the Office of the Accountant General of the Federation to ensure that the MDAs remit taxes promptly through the implementation of the Government Integrated Financial Management Information System, which facilitates deduction and remittance of Withholding Tax and Value Added Tax on all contract payments at source,” he stated.

According to him, the service has considered the convenience, proximity and ease of tax payment by introducing the idea that taxpayers can now file tax returns at any of the FIRS offices nearest to them.

He noted that advertising was key to the realisation of the objective, describing it as “a major change in more than 60-year shift in tax operational rules.”

Commenting on the achievement of the agency, the FIRS boss said, “In 2016, the country celebrated the addition of N27bn to the national treasury from a novel idea; the waiver of penalty and interest programme. The FIRS offered tax amnesty to taxpayers in default of payment of taxes between 2013 and 2015.

“The tax defaulters were allowed to pay the actual taxes owed, while the penalty and interest were waived. This was with a proviso: that they declared their indebtedness, paid 25 per cent of the principal amounts and present payment plans on the outstanding tax liabilities, acceptable to the service.

“It is likely that some members of this respectable association or your clients would have benefited from the unusual and generous avenue, which relieved them of their tax burden under the programme.”

Be the first to comment on "FIRS, AGF Collaborate to Deduct VAT at Source" 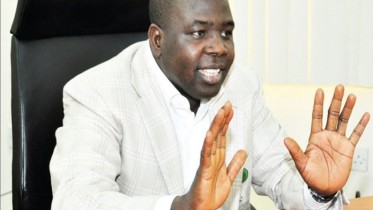 Managing Director/CEO of Sun Trust Bank, Muhammad Jibrin, tells why the new entrant’s game plan is anchored on tectonic shift in banking with emphasis on…

Naira Closes Lower Against US Dollar In September