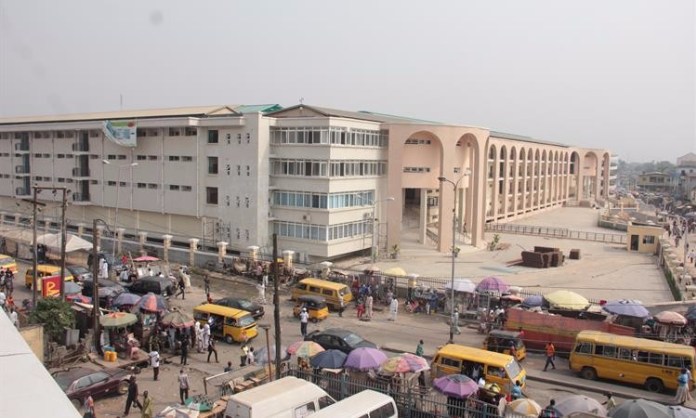 An early morning fire yesterday razed a shopping complex, destroying 94 out of the 201 shops with goods worth billions of naira at the popular Yaba Market in Lagos, opposite the Presbyterian Church.

The fire was said to have started from one of the shop at the back side of the complex where cloths, shoes, bags were stored burnt.

It was also gathered that the fire exacerbated and spread to other shops because of some highly inflammable materials such as wears stored in the shops, as well as air conditioners and generators filled with fuel, which caused occasional explosions as the fire raged the shops.

While the emergency team were battling to contain the flames, many shop owners were alerted and they tried to salvage some of their wares.

Meanwhile, some policemen were deployed from the Sabo and Adekunle Police Stations to deter some miscreants, who were lurking around, to loot goods.

Confirming the incident, LASEMA General Manager, Mr. Adesina Tiamiyu, who said no life was lost, also said they were involved in salvaging some items.

He said shops barricaded with iron bars were cut open using concrete cutter for the fire service to gain access to the affected areas and also prevent further escalation.

On the other hand, he advised market owners to ensure that their members are continuously sensitised on fire prevention and safety as well as ensuring that electrical appliances are put off daily after the close of business to avoid incident such as this.

In a similar development, another fire incident, occurred at no 83 Abeokuta Street, Ebute Metta, within the same period.

He said: “The agency along with the Lagos State Fire Service also responded to the fire outbreak at No. 83 Abeokuta Street Ebute Metta, on the same day.

“This prompted the immediate activation of the agency’s ERT to the scene of the incident. According to investigation they carried out at the scene the cause of the inferno remained unknown.

“However, further investigation conducted by the agency’s ERT revealed that the fire started from one of the rooms in the three bedroom flat of the first floor of the two storey building.

“No life was lost but two male adults who sustained minor injuries while trying to put out the fire and immediately treated by LASEMA Medical Team.

“The fire also destroyed some house hold materials in one of the room and the sitting room of the flat but was prevented from spreading to other part of the building by Lagos State Fire Service men.”