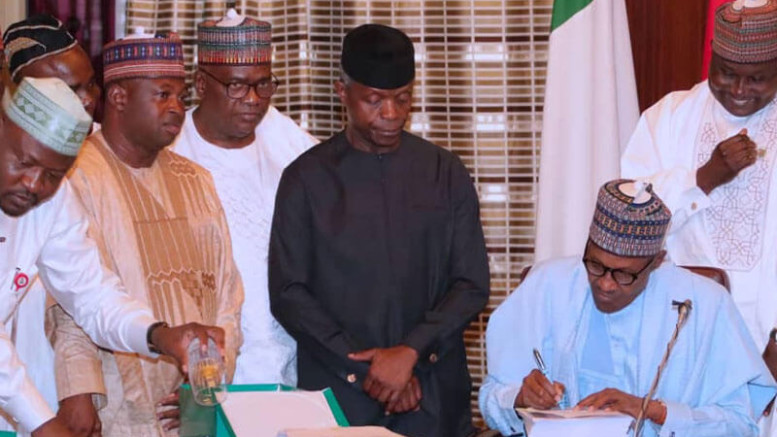 “I am concerned about some of the changes that the National Assembly has made to the budget proposals that I presented,” he told the nation in a speech that evidenced bottled up anger, adding: “Notwithstanding the above stated observations, I have decided to sign the 2018 budget in order not to further slow down the pace of recovery of our economy, which has doubtlessly been affected by the delay in passing the budget.”

The reaction of the National Assembly to the veiled presidential indictment was swift and concise Wednesday with the Senate Deputy Majority Leader, Bala Ibn Na’Allah, who was at the signing ceremony, saying the legislature did its job in national interest, explaining that not being a rubber stamp of the executive, its estimates could not have returned to it without adjustments.

The president had presented N8.6 trillion estimates with $45 per barrel of oil bench mark price to the National Assembly in November last year, but the federal legislators increased the figures to N9.1 trillion having revised the oil price benchmark upwards to $51.

The president had hinted his objection to the upward review, preferring that the upward swing in oil price and its attendant extra cash to the national treasury ought to be used to reduce the budget deficit rather than increase expenditure since the shortfall was going to be financed by borrowing any way.

This conceptual disagreement had tactically delayed presidential assent to the appropriation bill.

But fearing that the impasse could slow down the already sluggish economic recovery, the president’s economic advisers urged him to sign the money bill with a caveat.

This was what Buhari did Wednesday, lamenting loudly, the decision of the National Assembly to unilaterally increase its own budget from N125 billion to over N139 billion, while cutting off N347 billion from the executive’s votes, promising to send a supplementary proposal to the legislature to rectify identified problem areas in the estimates.

The budget signing ceremony, which took place in the State House, was witnessed by Vice-President Yemi Osinbajo; Secretary to the Government of the Federation (SGF), Boss Mustapha; Chief of Staff, Abba Kyari; and ministers as well as National Assembly members.

The Senate President Bukola Saraki and Speaker of the House of Representatives Yakubu Dogara, who were absent at the event, were represented by the Deputy Senate Leader Bala Na’Allah, and House Chief Whip Ado Doguwa, respectively.

Buhari, who lamented the failure of the National Assembly to pass the budget before the end of last year in accordance with the executive plan to return the country to January – December budget cycle, observed that the development had a very significant accelerator effect on the financial plans of other tiers of government, and even more importantly, the private sector, which mostly operates on a January-December financial year.

However, he said the setback notwithstanding, he remained committed to the course of improving Nigeria’s budgeting process and sustain the vision to return the country to January-December budget cycle.

Buhari lamented that the National Assembly made budget cuts to the tune of N347 billion for critical 4,700 projects from the original proposal and introduced fresh 6,403 projects at the cost of N578 billion into the budget, which he said would be difficult to implement.

According to him, such budget cuts and fresh introductions would hamper the government’s plan to deploy the 2018 budget for the consolidation of the achievements of previous budgets and simultaneously deliver on Nigeria’s Economic Recovery and Growth Plan (ERGP) 2017-2020.

Regretting that the fresh projects introduced by the National Assembly into the budget neither had any cost placed on them nor were they conceptualised and designed hitherto, Buhari said the new projects were added to the budgets of ministries, departments and agencies (MDAs) without bearing in mind their capacity to implement them.

He also said a lot of the new projects were supposed to be executed by both the state and local governments, explaining that they had added to federal government’s burden.

The president then proceeded to list such projects removed by the National Assembly as well as their importance to the economy.

“The provisions for some nationally/regionally strategic infrastructure projects such as counter-part funding for the Mambilla Power Plant, Second Niger Bridge/ancillary roads, the East-West Road, Bonny-Bodo Road, Lagos-Ibadan Expressway and Itakpe-Ajaokuta Rail Project were cut by an aggregate of N11.5 billion,” he said of one the critical projects.

He added: “Similarly, provisions for some ongoing critical infrastructure projects in the FCT, Abuja especially major arterial roads and the mass transit rail project, were cut by a total of N7.5 billion. The provision for Rehabilitation and Additional Security Measures for the United Nations Building by the FCT, Abuja was cut by N3.9 billion from N4 billion to 100 million; this will make it impossible for the Federal Government of Nigeria to fulfil its commitment to the United Nations on this project.”

Saying the cuts would make the projects almost impossible to implement, he served notice that he would be approaching the legislature with a supplementary proposal to rectify the lapses he had identified.

“However, it is my intention to seek to remedy some of the most critical of these issues through a supplementary and/or amendment budget which I hope the National Assembly will be able to expeditiously consider,” the president added.

He said he was, however, glad that N1.5 trillion was spent on capital projects in the 2017 fiscal year, adding that the administration would work very hard to generate the revenues required to finance projects and programmes in the 2018 budget.

But in a swift reaction to the president’s criticism of the handling of the budget by the National Assembly, Deputy Senate leader Na’Allah said the federal legislature was not disturbed by issues he raised.

According to him, it was impossible to have returned the budget to the executive the way it was submitted, explaining that the National Assembly had the responsibility to ensure that allocations in the budget were evenly distributed across the six geo-political zones of the country.

Promising that the National Assembly would treat the supplementary budget being proposed by the president with dispatch, Na’Allah also said if the National Assembly had approved allocations as proposed in the budget without looking at the merit, the legislature would not have been seen to have done its job as required.

Na’Allah also said delay in its passage as raised by the president could not be blamed on the National Assembly alone, recalling that the MDAs failed to appear for their budget defence until they were given marching orders by the president.

According to him, “The job of parliamentarians is a very difficult one. The way the budget came, if we had allowed it to go that way, we would have been in trouble with those who elected us. You have to balance between the six geo-political zones.

“It is the balancing efforts by the National Assembly that led to those observations and happily enough, he himself has said he is coming with a supplementary budget which will be dealt with as quickly as possible. I assure you about that one.”

On passage delays, he said: “The president is right, but at the same time, if you remember, you were here. The president had to order some MDAs to appear before the National Assembly for the purpose of defending their budgets.”

In his own reaction, Ado Doguwa, the Chief Whip of the House of Representatives, said Buhari had the freedom to raise the issues he brought up while signing the budget, observing that such issues were critical.

According to him, when the president eventually submits the proposed supplementary budget, the National Assembly will also have the freedom to examine the content.

He echoed Na’Allah that the delay in passing the budget was necessary because the legislature was not expected to merely return the Appropriation Bill as presented to it.

In its formal reply, the House of Representatives insisted the parliament was not a rubber stamp that could not exercise its constitutional powers to vet the budget proposal as presented to it by the executive.

Its spokesman, Abdulrazaq Namdas, in a statement, said: “We have to remind Mr. President that we are representatives of our people and wish to state that even the common man deserves a mention in the budget by including projects that will directly affect his life positively. Some of the projects designed by the executive, as high-sounding as their names suggest, do not meet the needs of the common man.”

Saying the legislative inputs were justifiable, he urged the president to ensure that the executive send the annual estimates to the legislature early enough.

“We are on the same page with Mr. President in his desire to return our budget cycle to January-December. By the provisions of the Fiscal Responsibility Act, 2007, the budget estimates should be with the National Assembly around September of the year,” he said, pointing out that the 2018 estimates came behind schedule in November 2017.

The Senate in a statement by its spokesman, Sabi Abdullahi, associated itself with the submissions of the House, promising a fuller statement in due course.

Be the first to comment on "Finally, Buhari Signs 2018 Budget with Reservations"

Capital Market Operator Sued for Alleged N58m Fraud The Managing Director of Brentonwoods Limited, Mr Samuel Adebanjo, and his company have been dragged to court…

Nigeria Getting Out of Recession, Says Minister