Fidelity Bank Plc has recorded gross earnings of N110.3 billion in its unaudited financial results for nine months ended September 30. The figure was an increase from the N107 billion, representing a growth of 3.0 per cent during the previous year.

The lender also grew its deposit base by 3.4 per cent to N795.6 billion from N769.6 billion recorded in last year’s result.

“We continued with the disciplined execution of our medium term strategy and recorded decent growth on some key operational metrics while moderating the impact of the headwinds above on other financial indices,” he said.

However, the bank’s Profit Before Tax (PBT) dropped by 28.7 per cent to N9.8 billion from N13.8 billion in the period under review.

Okonkwo said the PBT declined largely due to “a 102.0 per cent year-on-year growth in impairment charge to N4 billion driven significantly by increased provisions made in the second and third quarters of the year.

“The increased yields on earning assets were driven by the re-pricing of the loan book and higher yields on liquid assets. Deposits grew by 3.4 per cent to N26 billion from December 2015,” he explained.

Meanwhile, the lender yesterday announced the appointment of Ernest Ebi as a non-Executive Director and Chairman Designate of the Board of Directors. This follows the retirement of the chairman of the bank, Chief Christopher Ezeh who, after over 11 years of meritorious service to the bank retired, having attained the retirement age for non-executive directors in line with the bank’s policy.

Be the first to comment on "Fidelity Bank Posts N110.3b Gross Earnings in Q3" 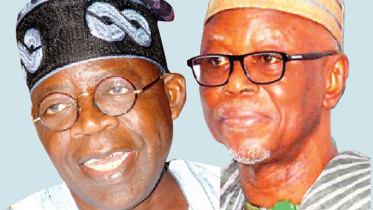 The recent call by a national leader of the All Progressives Congress, Asiwaju Ahmed Tinubu, that the party’s National Chairman, Chief John Odigie-Oyegun, should resign…