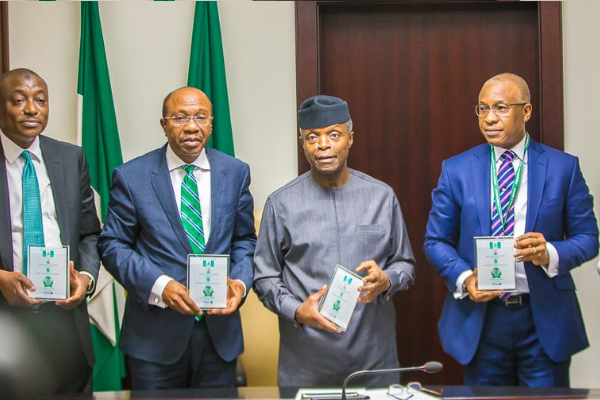 The Federal Government has transferred its 21 per cent shares in the Nigerian Security Printing and Minting Company to the Central Bank of Nigeria.

Vice-President Yemi Osinbajo, who is the Chairman of the National Council on Privatisation, on Tuesday witnessed the signing of the transfer instrument, which was co-signed by the CBN Governor, Godwin Emefiele, and the Director General of the Bureau of Public Enterprises, Alex Okoh.

The signing took place at the Presidential Villa in Abuja.

The 21 per cent shares transferred to the CBN translates to 12.69 billion shares in the minting firm.

Osinbajo, who noted that over 140 publicly-owned companies had been privatised in the past 30 years, said the Federal Government divested its 21 per cent public interest in the NSPMC to give room for synergy that could come from the public and private sectors coming together.

According to him the Federal Government’s divestment of its interests in the NSPMC would help to bring experts on board to run the company.

He also noted that the CBN and its technical partner, De La Rue, the private company in the deal, would bring in innovative edge to the NSPMC.

He said, “Security printing has taken new dimensions, it is no longer what it used to be. As a matter of fact, there are those who think that today there is more of technology than merely security printing.

“If you look at some of the cards that are being printed today, that the chips are not just security, they are actually technological assets.

“So, there are new assets and new dimensions, and there are new ideas, and it’s just the private sector that can really be at the cutting edge of technology and innovation.”

Osinbajo added that the government would stick to its regulatory and incentivising roles in business, while allowing the private sector to bear the risks.

Emefiele stated that the NSPMC was producing all the currencies needed in the country and had the capacity to produce for other countries of the Economic Community of West African States.

He said, “The capacity of the mint has increased, and it now produces all the currency that is needed in the country. The mint’s capacity has been expanded to where it has idle capacity that can produce for other ECOWAS countries.

“We intend to embark on aggressive marketing to see to it that not only does it produces for itself, but also produces for other important stakeholders that may require its services in the area of currency printing.”

“Our next phase is to see to it that the NSPMC eventually begins the printing of the digital Nigerian passport.”

Okoh also said the transaction would contribute “a net sum of over N17bn to the treasury.”

He stated that the CBN’s strategic investment in the company was a success.

Okoh added that the Federal Government was handing over to the CBN a company with tremendous potential to achieve significant growth.

He stated, “Following the expiration of the strategic investment period, the CBN indicated its strong intention to acquire the company on an arm’s length basis, noting the sensitive nature of the security printing and minting services rendered by the company, which include immigration and electoral materials.

“Accordingly, after a careful consideration of the pertinent issues, the bureau made a proposal to the NCP to formalise the sale of 21 per cent of the Federal Government’s interest in the company to the CBN, whilst the government would retain an equity holding of 10.1 per cent.”