The Federal Government is close to appointing banks to help underwrite the country’s first international bond since 2013 as the government deals with the worst fiscal crisis in 25 years.

Standard Chartered, Citi and Stanbic IBTC have been in talks with officials to arrange the Eurobond sale, according to sources close to the deal.

Vice-President Yemi Osinbajo has last week said the government hoped to conclude the sale of a $1bn Eurobond by the end of the first quarter of 2017.

The recent rise in global crude oil prices, coupled with expectations that Nigeria was making progress with plans to arrange loans from bilateral and multilateral lenders such as the World Bank, is expected to strengthen the country’s position in global capital markets after years in the cold.

The Financial Times reported that a successful debt sale would mark the end of a year of repeated setbacks for Nigeria, adding that prices for existing debt had fallen sharply as investors had shied away from the country, unsettled by militant attacks in the Niger Delta.

Efforts by the country to tap the bond market earlier this year had been frustrated by volatile oil prices, currency weakness after the peg was abandoned in June and the government’s failure to implement further reforms demanded by the international community.

The Head of Research at Ashmore Investment Management, Jan Dehn, said that even after the government abandoned its currency peg, there was a perception among investors that the naira could weaken further — leaving them reluctant to lend the country “hard” currencies such as dollars.

“People did not trust the currency,” he said. “It’s a difficult process for the country. [President Muhammadu] Buhari inherited a lot of problems including the difficulties with Boko Haram, the economy and the falling oil price.”

In spite of the removal of the currency peg, the official exchange rate remains far higher than the rate at which the currency changes hands in the black market.

Nigerian bankers and economists say the central bank is still managing the currency instead of allowing it to float freely.

But Kevin Daly, portfolio manager on the emerging market fixed-income team at Aberdeen Asset Management, says the rise in oil prices and move towards reform means there was scope for the country to tap debt markets. “Nigeria has very little external debt,” he added.

Oil production in the country has fallen sharply as attacks on energy infrastructure curtailed supplies and compounded the effects of the price of its main export falling dramatically early in 2016.

The vandalism and production challenges meant that the country was granted an exception to the recent OPEC agreement to cut output for the first time since the global financial crisis, the report stated. 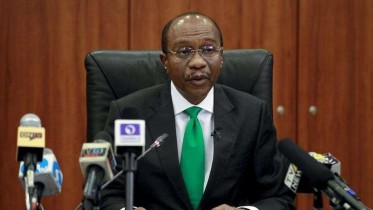 Police Arraign Whistle-blower Who Accused Emefiele of N232bn Fraud The police have arraigned a whistle-blower, George Uboh, for alleged defamation against the Governor of the…

‘Sun Trust is the Bank for Small and Medium Enterprises’